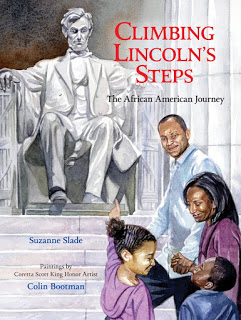 I don’t know how most authors get story ideas, but for me, a story comes in pieces. Then I fit them together like a puzzle. That’s what happened with my picture book, Climbing Lincoln’s Steps: The African American Journey, illustrated by Colin Bootman (Albert Whitman, 2010), and it took many months for all the pieces to come together.

In June, 2008 I caught the end of a news story — Barack Obama (presidential candidate at the time) was scheduled to speak where Dr. Martin Luther King, Jr. had given a speech.

The Lincoln Memorial? I wondered. Then I recalled Marian Anderson’s famous concert at the Memorial in 1939 when she wasn’t allowed to sing in Constitution Hall because she was black. Her performance inspired thousands, just as MLK’s “I Have a Dream” speech on the very same steps had reshaped attitudes in 1963.

Picture books often use the “rule of three,” so I pondered these three remarkable individuals, Anderson, King, and Obama, who had all sparked change. My first piece of the puzzle.

Then I considered the Lincoln Memorial — built to honor the man who fought to unite the country he loved — a country divided over slavery. Amid much opposition, Abraham Lincoln boldly signed the Emancipation Proclamation. He knew it wouldn’t instantly solve injustice or racial inequality. It was only the beginning of change. Lincoln was part of this story. The second piece.

But what about the steps? Three brave people who believed in equality for all–Anderson, King, and Obama–had each taken a courageous step of change there. The third piece.

Then September arrived. My kids returned to school. The house was quiet so I could finally dig into the story, which meant more research. I discovered Obama didn’t give a speech at the Memorial, but at another place where MLK had spoken. Still, I was convinced Obama was part of this story about change for African Americans. 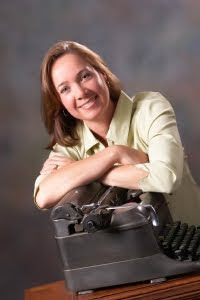 I decided to wait and see if he won the election before continuing. But the story wouldn’t wait. It was forming in my mind along with this repeating phrase, “Change. It happens slowly. One small step at a time.” So I typed up part of a story.

In November, Obama was elected as the first African American president. I listened intently to his acceptance speech about change. The next day I added a fictional visit by the Obama’s to the Lincoln Memorial after they moved into the White House. The last piece.

(Interestingly, President-elect Obama and his family made a special visit to the Memorial ten days before taking office, so I later revised the story to reflect that.)

Fortunately, Albert Whitman acquired the book. My brilliant editor, Abby Levine, expanded the story’s vision, and we included more brave people who stepped out for change.

When I first saw Colin Bootman’s stunning watercolor illustrations for Climbing Lincoln’s Steps (described as “striking” and “especially moving” by School Library Journal and Kirkus Reviews) I got goosebumps. I’m grateful for everyone who helped put the pieces of this book together, and am especially proud of the important message it shares.

“This attractive, accessible title uses the Lincoln Memorial as a vehicle to outline the history of the Civil Rights Movement from the Emancipation Proclamation to Dr. King’s ‘I Have a Dream’ speech to the 2008 presidential election. Slade explains in clear, descriptive prose … Bootman’s realistic watercolor spreads are striking …” —School Library Journal

“Each moment is narrated in the present tense, providing sensory details to evoke atmosphere and just enough background to provide meaning to the audience. Bootman’s illustrations clearly portray the emotions–fear, determination, joy … The final two-page spread of the First Family viewing the Memorial is especially moving …” —Kirkus Reviews