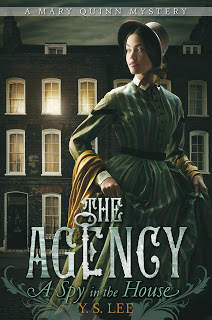 Y. S. Lee is the first-time author of The Agency: A Spy in the House (The Agency Trilogy: Book One)(Candlewick, 2010)(excerpt). From the promotional copy:

Rescued from the gallows in 1850s London, young orphan (and thief) Mary Quinn is surprised to be offered a singular education, instruction in fine manners — and an unusual vocation.

Miss Scrimshaw’s Academy for Girls is a cover for an all-female investigative unit called The Agency, and at seventeen, Mary is about to put her training to the test.

Assuming the guise of a lady’s companion, she must infiltrate a rich merchant’s home in hopes of tracing his missing cargo ships. But the household is full of dangerous deceptions, and there is no one to trust — or is there?

Packed with action and suspense, banter and romance, and evoking the gritty backstreets of Victorian London, this breezy mystery debuts a daring young detective who lives by her wits while uncovering secrets — including those of her own past.

Introducing an exciting new series! Steeped in Victorian atmosphere and intrigue, this diverting mystery trails a feisty heroine as she takes on a precarious secret assignment.

I’m supposed to be an expert on the Victorian era. But while researching my PhD thesis, I realized I didn’t know much about daily life in the 1850s.

Take the Great Stink of 1858, for example. We know the bare facts: toilets flushed right into the Thames, and Londoners pumped the water straight back out for cooking and bathing. People thought the smell made you sick – not germs. And future prime minister Benjamin Disraeli fled the House of Commons one day with a handkerchief over his nose, so evil was the stench.

But vivid as they are, these facts don’t tell what it was like in individual houses; for people who lived and worked and walked around the city every day; for those who lived beside the river. This squelchy, sticky reality is the Victorian period you don’t read about in nineteenth-century novels or diaries, and that’s why I chose the Great Stink as the backdrop for Spy.

However, I didn’t want to write an entire novel about sewage; for one thing, it’s hard to identify with it as a character. And I also wondered what happened to smart, unconventional women in the period. If you weren’t a good little girl, and you didn’t have a lot of money, what on earth happened to you?

Women’s choices were grim, even for the clever. You could be a governess (underpaid, powerless – look at Jane Eyre, and remember that’s a happily-ever-after story!). You could live with your rich relatives as a semi-servant (Jane Austen has a lot to say about that). You could try for a job as a clerk (and earn half what the man next to you did, for doing the same work – some things haven’t changed that much).

And to do any of these jobs, you had to be respectable, educated, and extremely long-suffering. Just thinking about it makes me want to scream.

So this is where I’ve gone my own way. If you’re curious about the nitty-gritty of Victorian domesticity, I highly recommend Judith Flanders’s The Victorian House (Harper Perennial, 2003), an absolutely gripping account of daily life in each room of a nineteenth-century home.

On germs and cholera epidemics, I love Steven Johnson’s The Ghost Map (Penguin, 2006), which came out after I’d researched Spy, but devoured anyway.

But my “greatest coup” in writing Spy was leaping away from history and imagining a bold, alternative fate for a girl like Mary Quinn. 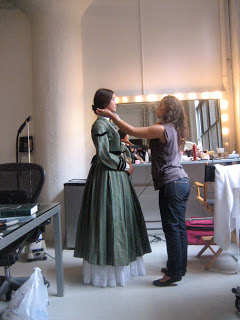 Oh, I’m still proud of this one: I queried UK agents as a test of authenticity, and it wasn’t until my agent offered representation that she realized I wasn’t British!

Clearly, having spent most of my adult life reading English literature helped with this act of ventriloquism.

Also, living in England gave me a first-hand understanding of the rhythms of British speech, and how Byzantine their regional and social distinctions can be.

So I was confident about how English my narrator sounded. But there was the additional problem of transposing the language back in time 150 years.

In practice, this means preserving the cadence of an English sentence – swift, staccato, with emphasis in different places than an American one – while using appropriately nineteenth century vocabulary. At the same time, the meaning has to be clear.

I often tried to define things in context: you may not know what a hansom is, but if I tell you that a man hailed one, climbed in, and asked the driver to take him to Bedford Square, it becomes perfectly clear that it’s a taxi cab. My vocabulary came straight from the great Victorian novelists: Dickens, Eliot, the Brontës. But I disagree with them in one respect.

In most Victorian novels, people speak in perfect, grammatical sentences (unless they’re working-class characters, in which case their speech is often spelled out fo-net-ick-ly – a major pet peeve of mine. It’s patronizing.) Did educated people never use slang, or contractions, or run-on sentences? And did the poor struggle to speak in their mother tongue? I think not.

Instead, I’d argue that people in Victorian England spoke more vividly and casually than we think – more “you and me” than “thee and thou.” And this is what I’ve tried to do in Spy.

From Candlewick Press: “Y. S. Lee has a PhD in Victorian literature and culture and says her research inspired her to write A Spy in the House, ‘a totally unrealistic, completely fictitious antidote to the fate that would otherwise swallow a girl like Mary Quinn.'” Y. S. Lee lives in Ontario, Canada.”