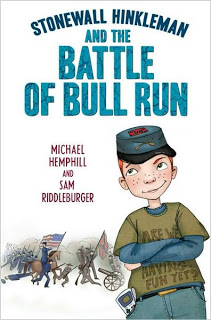 Michael Hemphill: “I grew up in Birmingham, Alabama, but didn’t know much about the Civil War until my wife and I moved to Virginia in 1997.

“Here in Virginia, I worked as a newspaper reporter (where I met Sam) until 2000 when the first of our three daughters was born. Since, I’ve been a stay-at-home dad, directed a nonprofit, worked in public relations at a local university, co-owned a Civil War battlefield tour company, and now have written–er, co-written–my first children’s book.”

Sam Riddleburger: “I’ve been a weed boy, a scientist’s assistant, a librarian, a prep cook, a lawnmower parts factory worker, a semi-pro juggler and a reporter. Now, I’m a newspaper columnist, a restaurant critic and a kids’ book writer.

“My first book is called The Qwikpick Adventure Society (Dial, 2007). No time travel, just three friends having the smelliest and best day of their lives.” Visit Sam, and read Sam’s blog.

What led you to write for young readers?

MH: I’ve always loved YA books–starting of course with The Chronicles of Narnia by C.S. Lewis (Harper, 1950-1956) and Tolkein but also the Walter Farley Black Stallion series (1941), Madeleine L’Engle, etc.

For some reason, my writing projects have tended to be more Serious (capital S) and Adult (capital A). They were also quite Unsuccessful and, quite frankly, Unenjoyable.

But then Sam and I got to talking, Stonewall came into being, and I loved every minute of the writing.

SR: When I was in the fifth and sixth grade I was a reading maniac. The stuff inside the books by people like John Christopher, Daniel Pinkwater and Helen Cresswell was just blowing my mind. That’s who I want to write for–kids like me.

SR: Stumbles? More like plunges and freefalls. It was hard. Incredibly hard. I was going crazy and would have given up if Michael hadn’t gotten us an agent. A great agent.

MH: The sprint was writing the first draft. We spent the first year trying to sell Stonewall directly to publishers, got some strong nibbles, but it never sold.

So we spent some weeks revising and then began sending it to agents. Thankfully, one of those agents was Caryn Wiseman with Andrea Brown Literary Agency. She gave us hope in Stonewall again, and here we are.

Looking back on your apprenticeship, what was most helpful to you in developing your craft?

SR: Before writing my first book, I wrote hundreds and hundreds of news stories. You learn a lot about setting up a story, pacing, transitions and that sort of thing. And you get used to being edited.

MH: Like Sam (whose daily antics I had to endure working on the other side of the cubicle wall in the newsroom), I learned a lot from writing news stories…particularly the importance of a strong lead and tight sentences and graphs.

While at the newspaper I also took a screenwriting course at nearby Hollins University and came to appreciate the art of snappy dialogue and shifting perspectives in moving a story along.

Congratulations on the release of Stonewall Hinkleman and the Battle of Bull Run (Dial, 2009)! In your own words, what is the book about?

MH: Stonewall Hinkleman is your typical 12-year-old kid who gets dragged along to all of his parents’ Civil War reenactments. He hates reenactments, he hates the Civil War, and he’s not too fond of his parents either. He’s got a bad attitude and isn’t afraid to show it…until at the reenactment of the Battle of Bull Run (Manassas), he’s magically transported back in time to the real battle.

Suffice it to say, he gets an attitude adjustment and comes to a better appreciation of the war. Oh yeah, and he meets a girl along the way…and his great-great-great-great uncle, who turns out not to be the coward of family lore…and an evil Confederate reenactor who has also gone back in time to help the South win.

SR: When I started, Michael already had the idea of writing about reenactors. The name popped into my head. The name brought forth the character almost instantly.

Sick to the gills of the Civil War, for starters.

MH: Five years from writing chapter one to the release of the book.

We’re talking about major revisions, too. And the book got better and better thanks to those people pushing us to make it better.

MH: Having to convince Sam on a daily basis that I was right.

I loved the book’s sense of fun, but also its sophistication. At the risk of stating the obvious, we don’t see a lot of humorous boy-friendly adventure fantasies that also take the topics of real-life war and racism. What were the toughest decisions you had to make in framing the historical context?

SR: Here in Virginia, you grow up thinking that Stonewall Jackson and Turner Ashby were heroes. Grant and Sherman? Bad guys. You learn about the battles, and there’s a feeling that the South should have won.

And somehow when you grow up you have to reconcile all that with the simple fact that the South was wrong as wrong can be.

We stuck Stonewall Hinkleman–and ourselves–right in the middle of all that. Anything less would have been dodging the question. But I don’t feel like we answered it, either.

But the story is obviously so much more complicated and rich and compelling when you explore all the “grays” instead of looking at it in black-and-white terms. Sending Stonewall back in time to the Confederate army allows for this exploration.

Giving kids a more nuanced racial and historical understanding of our past can only help them grasp the complexities of the America of today.

Could you describe your collaborative process?

SR: Ever see that “Wild Kingdom” episode where Marlin Perkins’s assistant waded into a river and wrestled a tapir?

MH: All joking aside, Stonewall would not have come to life without the equal contribution of each of us. I must credit Sam, though, for setting the tone of the book and giving Stonewall his voice.

SR: And I must credit Michael with actually knowing something about the Civil War.

What advice do you have for writers of historical fantasy?

MH: It’s tough to strike the right balance between remaining historically accurate to an event while at the same time feeling free to shape the event to your own plot designs. You don’t want to get bogged down with all the historical details, but I know I wanted our readers to know which moment–or which character–was indeed historically authentic.

What special considerations must be taken into account with a time-travel story?

MH: What we did not want was the novel to be a “Back to the Future” meets the Civil War.

SR: Yes, we fought hard to get away from “Back to the Future,” which is a masterpiece, after all.

The tough thing about time travel is that if a character could really travel through time at will, they could solve all their problems too easily. So you have to make rules to keep them from doing that.

The problem is you, the author, are stuck following those rules, too. Which can be very hard at revision time. There were times when I started to think things were hopeless.

What do you hope young readers will take away from the story?

MH: That the Civil War remains the most important event in American history and still informs the events of today–all the way to the White House.

SR: There are all sorts of morals you can draw from the book — most notably that war affects real people, real individuals–but honestly, I just hope kids find it to be a wild ride of a story. We sure worked hard to make it one.

Other than your own, what’s your favorite children’s/tween novel of 2009 and why?

MH: Hopefully the next installment of Stonewall Hinkleman. The Battle Bull Run/Manassas occurred on July 21, 1861. The war ended in April 1865. There’s a lot more to cover.

SR: I’d like to point out that having a co-author is an amazing experience. Things happen in the book that neither of you ever would have come up with on your own. I recommend it!