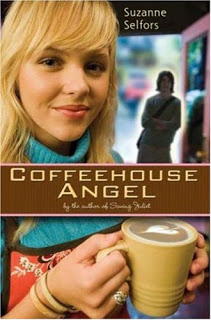 Saving Juliet is out in paperback and made some summer reading lists and continues to build readership.

To Catch a Mermaid will be included in Scholastic Book Fairs this fall, so that’s very good news.

Congratulations on the publication of Coffeehouse Angel (Walker, 2009)! In your own words, what is the book about?

Feeling lost. Feeling like you’re the only person who doesn’t know what she’s going to do with her life.

Katrina, the story’s protagonist, has two best friends with very clear-cut goals for college and life, while Katrina hasn’t yet figured out what she’s good at.

There’s also a strong theme of forgiveness running through the story. Forgiving others, but also, forgiving yourself. Allowing yourself to be who you are.

While this is a romantic comedy, readers should know that the romance isn’t the central component. Katrina’s identity struggle is the story’s core.

The story’s location was inspired by the town of Poulsbo, where I go a few times a week to write. It’s a Scandinavian-themed town, and that’s where I first saw Katrina and her grandmother’s old-world coffeehouse. They came to life there. If you visit my website you can see photos of Poulsbo and some of the locations I included in the story [scroll to view].

I was also influenced by a conversation I had with a friend who was stressed out because her teenage daughter wasn’t going to be doing enough during the summer. This girl was taking sailing lessons, a summer intensive language program, volunteering with her church, and a slew of other things I can’t remember.

Summer, for this mother, was all about plumping up her daughter’s resume so she could get into the best college, etc. Each day was planned.

It stressed me out just listening to her, and I realized that there’s this horrid pressure on this generation of teens to succeed. It kind of made me sick.

What happened to the great tradition of hanging out all summer?

Coffeehouse Angel was the second book in a two-book contract. I had six months to write it and another month for revisions. Because I’m under contract for middle grade novels as well, I have to weave the two projects. So while I’m writing one book, I’m usually waiting for a revision letter on another. It’s a tricky balancing act.

I’m happy to say that Coffeehouse Angel is part of the fall 2009 Kid’s Indie Next List!

How did writing this book “grow” you as a writer?

I think I’m becoming more comfortable with first person. First person is risky because you can turn the reader off immediately. I’ve walked away from many first-person novels because I didn’t want to spend time in that particular head.

Katrina in Coffeehouse Angel has a very warm voice, while Mimi in Saving Juliet can be quite cynical at times. But those voices are honest to those characters.

Don’t overlook the power of bloggers. My publisher mailed lots of ARCs to blog reviewers, but so did I. I made sure I had a stack of ARCs, and I set money aside for shipping.

If a request came in, I shipped an ARC, no questions asked. Even if the girl only had seven followers, that’s not the point. The point is, you’ve just found yourself a new reader. And word-of-mouth is huge in the YA market.

I love going to movies and plays. I usually have season tickets to the Seattle Rep and Seattle Children’s Theater.

And I love taking walks with my dog and going out on our boat with the family.

The next middle grade book comes out in May 2010, called Smells Like Dog (Little, Brown). I just got a sneak peek at the cover, and it’s adorable.

And I’ve just finished the first draft of my next YA book, not sure of the release date for that one.

In the video below, Suzanne talks about Coffeehouse Angel.