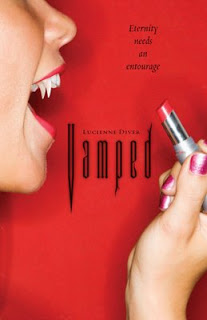 I was/am a geek. A D&D playing, chorus-singing, braniac thespian. You know, the kind who took extra art and English classes because study hall and lunch were just wastes of time. I did junior high, high school and community theatre because, you know, all that homework wasn’t enough to keep me busy.

I was also a voracious reader and was caught several times reading fiction behind my text books–everything from Robert A. Heinlein and Isaac Asimov to Madeleine L’Engle, Elizabeth George Speare and Margaret Mahy to Victoria Holt, Phyllis Whitney, Mary Stewart and Sir Arthur Conan Doyle.

I didn’t and still don’t care what genre is listed on a book’s spine, as long as between the covers there’s a good story with wonderful characters.

In no particular order: Watcher in the Woods by Florence Engel Randall (Atheneum, 1976), The Changeover: A Supernatural Romance by Margaret Mahy (J.M. Dent & Sons, 1984), The Witch of Blackbird Pond by Elizabeth George Speare (Houghton Mifflin, 1958), Island of the Blue Dolphins by Scott O’Dell (Houghton Mifflin, 1960), The Monday Horses by Jean Slaughter Doty (Greenwillow, 1978).

I’ll never forget writing to Ms. Doty when I was a kid and receiving a letter back. It was one of the high points of my young life.

I didn’t so much decide to write for young adults as have a young adult character, Gina from Vamped (Flux, 2009), introduce herself to me. Well, maybe it wasn’t as formal as all that.

Gina started talking in my head one day, a recently vamped fashionista who finds true horror in the realization that she no longer has a reflection, no way to do her hair and make up. Eternal youth is completely wasted if she has to go through her whole unlife a total schlub.

So she decides to turn her stylist, a decision her geekboy sire isn’t too excited about until she tells him to get with the plan or pick up the styling slack.

The only way to get her out of my head was give her a story. Everyone loved it. “But this is a vignette,” they said, “and it really wants to be a novel.” They were right.

The thing was, I didn’t have a plot. Turns out, that was only a minor hurdle. If it meant more face-time, 200+ pages rather than ten, Gina was going to get right on that.

I know it’s weird that I talk about my character as though she really exists, but when I’m in the zone with a book, it feels more like I’m channeling my heroine’s voice than developing my own. The book practically writes itself.

I’ve written since the fifth grade when my wonderful teacher Mr. Hart divided the entire classroom into writing groups and gave us assignments to write, critique, and revise on a regular basis.

I was hooked. I’d always had stories in my head. I’d just never committed them to paper.

Mr. Hart was also greatly encouraging about my work. I felt as though I’d found my calling.

In high school, I edited our literary magazine. In college, it was our anthropology publication. I had pieces published in both.

But the big bad world of professional publishing was a harder road to hoe. I have many apprenticeship works (aka trunk novels) that will never see the light of day, where I got all the clichés and said-bookisms out of my system (I hope).

My writers’ group was an amazing help and dragged me, kicking and screaming, to some realizations without which I’d never have seen publication. Even now that I’ve hit that stage, my critique partner, readers, and agent are invaluable for their input. I still need that push every now and then. Makes me a better writer.

I used to have trouble torturing my characters. When I first started writing, all my heroines were sort of the “she I want to be.” I think I identified too much.

When Gina started talking to me I knew exactly where she came from–the big-haired girl with the “reputation” who used to torment my sister in high school. Oh, it was so easy to torture her. Fun too! But once I set out to give her a novel, I had to develop and chance the character so she was someone I wanted to spend an appreciable amount of time around. I learned a lot from that experience. I don’t think it’s a coincidence that it’s the first of my works to sell in a big way.

One of my biggest epiphanies, though–and here I’m about to get a little personal–was when one of my critique partners, a former editor and very successful author, challenged me to write characters who emote. See, that “she I want to be” meant no messy emotions. Tough as nails, confident, untouchable. I’d grown up in a family that saw emotions as a weakness, but as a writer, well, let’s just say they’re a necessary evil.

Anyway, that’s the biggest realization I was drawn to, kicking and screaming. If I could have done things differently, I’d have seen that a lot sooner. I don’t think I’d have nearly so many trunk manuscripts if I had.

As you can probably tell from my long-winded answer above, it was not smooth sailing. I had a lot to learn and a lot of dreck to get out of my system before I was ready for publication.

The successful part of my path started with “The Problem with Piskies,” a buddy cop story…if the cop is on a bender while recovering from a werewolf attack he’s yet to come to terms with and the buddy is an annoying little pisky named Bob, AKA Bobbin, AKA Kneebob on the run. 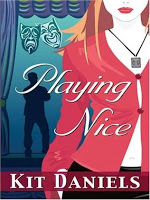 It placed in Quantum Barbarian’s fiction contest and was published in the final issue of the webzine under my pseudonym Kit Daniels. And it paid! (Not well, but hey….) Next it was my romantic comedy Playing Nice, which sold to Five Star (2006), another short story….

Congratulations on the success of Vamped (Flux, 2009)! What is the book about?

Here’s the blurb I used on my press release:

From “Valley Vamp Rules for Surviving Your Senior Prom” by Vamped heroine Gina Covello: Rule #1: Do not get so loaded at the after prom party that you accidentally-on-purpose end up in the broom closet with the surprise hottie of the evening, say the class chess champ who’s somewhere lost his bottle-cap lenses and undergone an extreme makeover, especially if that makeover has anything to do with becoming one of the undead.

Gina Covello has a problem. Waking up dead is just the beginning. There’s very little she can’t put up with for the sake of eternal youth and beauty. Blood-sucking and pointy stick phobias seem a small price to pay. But she draws the line when local vampire vixen Mellisande gets designs on her hot new boyfriend with his prophesied powers and hatches a plot to turn all of Gina’s fellow students into an undead army to be used to overthrow the vampire council.

Hey, if anyone’s going to create an undead entourage, it should be Gina! Now she must unselfishly save her classmates from fashion disaster and other fates worse than death.

I’m not sure about the exact timeline. I’d say that the initial draft took between four and six months to write, but the story went through so many drafts after that that I’d estimate the overall time it took to write Vamped was about a year.

Once it went out on submission it probably took another four months (and one more revision at the suggestion of the acquiring editor) to sell.

I can tell you exactly when that happened–Superbowl weekend 2008. I know because I got the call when my family and I were in the airport on our way to see friends, and I practically turned cartwheels right there in the terminal.

Then it was about fifteen months (from February 2008 to May 2009) for publication.

It’s funny, all the major events seemed to happen when I was traveling. The cover came in during another trip. I was so excited that I printed it out at an Internet café and showed it everyone I met, whether I knew them or not. I had to fend off a few men in white suits who wanted to lure me into their nice padded wagon, but the buckles on the jacket they wanted to fit me with were just so ’80s that I had to turn them down.

The biggest challenge is in finding the time to write. I’ve had to carve it out of sleep, waking up before my inner editor every morning so that I can find time to write that isn’t already committed to anything else.

Oh, there are crafty things I’d love to have taught myself early on so that I might have gotten farther faster, but in truth, I think sometimes an author needs to cure.

I became a better writer after my son was born. I don’t know if it conferred a new maturity or depth of feeling, but I do know that something in me shifted.

I think/hope that I’m improving all the time. Maybe in another ten or twenty years, I’ll actually have wrestled into submission some of the elements that continue to fight me.

Ack, that’s so tough! Both Rosemary Clement-Moore (Highway to Hell (Delacorte) and the forthcoming Splendor Falls (Delacorte)) and Rachel Caine (Carpe Corpus, Fade Out (Signet, 2009, both from the Morganville Vampires series) have new YA novels out this year and both are so amazingly fabulous that I just can’t choose.

Agenting, reading, wrestling with the puppy (or my husband), playing with my son, sunbathing, beading, shopping. Is there time for anything else?

I’m very excited that Revamped (Flux) will be out next fall.

In the meantime, I’ve got a short story coming out in Strip Mauled, an anthology edited by Esther Friesner (Baen, 2009). It’s sort-of a sequel to “The Problem with Piskies,” though you can certainly read one without the other.

I also have a vampire story coming out in an as-yet-untitled Esther Friesner anthology to be published by Baen Books in 2010.