In celebration of the “Read Beyond Reality” theme of Teen Read Week, which is scheduled for Oct. 18 to Oct. 24, and the spooky season now upon us, I’m offering the biggest, winner-take-all Cynsational giveaway ever, with an emphasis on my latest release, Eternal (Candlewick, 2009), and several spooktacular read-alikes!

You can enter to win:

“At last, Miranda is the life of the party: all she had to do was die. Elevated and adopted by none other than the reigning King of the Mantle of Dracul, Miranda goes from high-school theater wannabe to glamorous royal fiend overnight.

“Meanwhile, her reckless and adoring guardian angel, Zachary, demoted to human guise as the princess’s personal assistant, has his work cut out for him trying to save his girl’s soul and plan the Master’s fast-approaching Death Day gala.

“In alternating points of view, Miranda and Zachary navigate a cut-throat eternal aristocracy as they play out a dangerous and darkly hilarious love story for the ages.” Read an excerpt. See trailer by Shayne Leighton.

Coffeehouse Angel by Suzanne Selfors (Walker, 2009). Peek: “When Katrina spots a homeless guy sleeping in the alley behind her grandmother’s coffee shop, she decides to leave him a cup of coffee, a bag of chocolate-covered coffee beans, and some pastries to tide him over.

“Little does she know that this random act of kindness is about to turn her life upside down. Because this adorable vagrant, Malcolm, is really a guardian angel on a break between missions, and now he won’t leave until he can reward Katrina’s selflessness by fulfilling her deepest desire.

“Fame and fortune seem like the obvious requests, but after two botched wishes, Malcolm knows Katrina is hiding something from him. How can she tell him the truth, when her heart’s desire has become Malcolm himself?

“Fans of romantic comedies will be clamoring for this heartfelt novel that is good to the last drop.”

Far From You by Lisa Schroeder (Simon Pulse, 2009). From the promotional copy: “Years have passed since Alice lost her mother to cancer, but time hasn’t quite healed the wound. Alice copes the best she can be writing her music, losing herself in her love for her boyfriend, and distancing herself from her father and his new wife.

“But when a deadly snowstorm traps Alice with her stepmother and newborn half sister, she’ll face issues she’s been avoiding for too long. As Alice looks to the heavens for guidance, she discovers something wonderful.

“Perhaps she’s not so alone after all…” 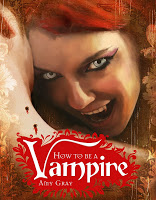 How to Be a Vampire: A Fangs-On Guide for the Newly Undead by Amy Gray (Candlewick, November 2009). From the promotional copy: “Here the secrets of the undead are revealed, from how to be turned to how to fill eternity once you’ve been bitten, including: telling your family that you’re a child of the night; dressing like the mysterious creature you are; and dos and don’ts of dating a mortal.”

Jessica’s Guide to Dating on the Dark Side by Beth Fantaskey (Harcourt, 2009). From the promotional copy: “Marrying a vampire definitely doesn’t fit into Jessica Packwood’s senior year ‘get-a-life’ plan. But then a bizarre (and incredibly hot) new exchange student named Lucius Vladescu shows up, claiming that Jessica is a Romanian vampire princess by birth, and he’s her long-lost fiance. Armed with new-found confidence and a copy of Growing Up Undead: A Teen Vampire’s Guide to Dating, Health, and Emotions, Jessica makes a dramatic transition from average American teenager to glam European vampire princess.

“But when a devious cheerleader sets her sights on Lucius, Jess finds herself fighting to win back her wayward prince, stop a global vampire war, and save Lucius’s soul from eternal destruction.”

Kissed by an Angel by Elizabeth Chandler (Simon Pulse, 2008); “In a romantic and suspenseful collection of the New York Times bestselling trilogy (Kissed by an Angel; The Power of Love; Soulmates), love’s unbreakable bonds are put to the test.

“When her boyfriend, Tristan, died, Ivy thought she’d lost everything, even her faith in angels. But now she’s discovered that he’s her guardian angel–his presence so strong that she can feel the touch of his hand, the beat of his heart. Ivy needs Tristan now more than ever because he knows she’s in terrible danger. Only Ivy’s guardian angel can save her now that his killer is after her.

“But if Tristan rescues Ivy, his mission on earth will be finished, and he must leave her behind forever. Will saving Ivy mean losing her just when he’s finally reached her again?”

Vamped by Lucienne Diver (Flux, 2009). From the promotional copy: “Vampire vixen Mellisande has taken an interest in my boyfriend, and is now transforming the entire high school into her own personal vampire army. If anyone’s going to start their own undead entourage it should be me.

“I guess I’ll just have to save everyone from fashion disasters and other fates worse than death.”

To enter this mega giveaway, email me (scroll and click envelope) with your name and snail/street mail address and type “Read Beyond Reality” in the subject line (Facebook, JacketFlap, and MySpace readers are welcome to just message me with the name in the header; I’ll contact you if you win).

You will get an extra chance to win for each of the following:

(1) you blog about the giveaway and link to my related announcement posts at Cynsations at Blogger, LiveJournal, JacketFlap, MySpace or Spookycyn (send me the URL to your post with your entry);

(3) you are a YA teacher or librarian (indicate school/library with your entry message);

(4) you are a book blogger (teen or grown-up)(include the URL to your blog with your entry).

Good luck, stay spooky, and watch this blog for Teen Read Week interviews with several of the authors featured above!

Check back during Teen Read Week–Oct. 18 to Oct. 24–for a chance to win the newly released Immortal: Love Stories with Bite, edited by P.C. Cast (BenBella, Oct. 2009)!

Note: Immortal will be available at bookstores nation-wide on Oct. 6.