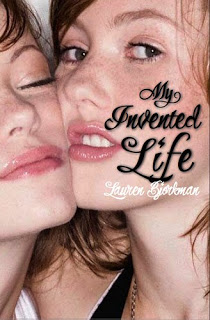 Lauren Bjorkman is the first-time author of My Invented Life (Henry Holt, 2009). From the promotional copy:

Roz and Eva are sisters, friends, and rivals. Roz fantasizes about snagging the lead in the school play and landing sexy skate god Bryan as her boyfriend.

Sadly, a few obstacles stand between her and her dream. For one, Eva is the more talented actress. And Bryan happens to be Eva’s boyfriend. But does Eva have a secret life with her cheerleading partner? Inquiring minds need to know.

Roz, who prides herself on random acts of insanity, hatches a scheme to get Eva to open up. The plan backfires, and Eva is furious. Roz finds herself neck deep in her invented life.

When Roz meets a mercurial boy with a big problem, she begins to understand the complex feelings beneath the labels. And she gets a second chance to earn Eva’s trust.

My Invented Life is a YA novel set in a small California town during the rehearsal of “As You Like It” by William Shakespeare.

How did you approach the research process for your story?

My story is about sisters, which didn’t require much research. But I chose to write about sexual orientation, too, because of events around my high school reunion, and this was less familiar territory. In the beginning, the experiences my friends and classmates shared with me were not enough to go on. I started by reading a stack of novels for adults and teens–both classic and modern—written by and for the LGBT community, and a few for the community at large.

But I wanted to write for the whole LGBTQSU (lesbian, gay, bi, trans, questioning, straight, and unlabeled) community, and there weren’t many books that did this, especially books written by a more or less straight person. To go deeper, I read dozens (maybe hundreds) of coming out stories online. Which I loved! These stories break your heart and lift your spirits, all in a few paragraphs. And I read piles of support literature to understand the issues better.

The breakthrough happened when I told my friends and family about my work-in-progress. The diversity of reactions would fill a novel. Many of my presumably straight friends shared about themselves–one had a lesbian phase in collage, one was bisexual, one had crushes on women, etc. This caught my attention, and made me to consider a more ambiguous sexual orientation for several of my characters.

Then the movie “Kinsey” came out. I read a lot about him, and his 0-6 scale of sexual orientation. Kinsey’s scale and a conversation with a friend about how we label each other and ourselves sparked a sub-plot in my novel.

Besides researching issues around sexual orientation, I investigated the setting–a school production of a Shakespeare play–by attending my local high school’s rehearsals for a “Midsummer’s Night Rave.” This helped me add authentic details to many scenes.

And I revised my book so many times. Between the library, the Internet, and my friends and family, my novel evolved into something entirely different from where it started.

E.B. White said, “Analyzing humor is like dissecting a frog. Few people are interested and the frog dies of it.”

When I write the funny parts of my story, I turn off my analytical mind and get into the “zone.” If I’m feeling anxious or self-critical, I don’t bother writing humor at all. Instead I focus on advancing the plot. After I’ve written a humorous bit, I hone it with my editing brain.

When revising humor, I pay a good deal of attention to word order. Timing is everything. Word choice is important, too.

To get a true sense of what’s funny about my material, I subject myself to critique. There’s no way around this. I find it best to read my work aloud to a group of four or more. What cracks one person up, may elicit a blank stare in others. Once I discover an angle that works, I write more in that vein. But I don’t always go with the majority opinion. Sometimes the obscure jokes are the real gems.

A book on humor writing has helped me–The Comic Toolbox by John Vorhaus (Silman-James Press, 1994). One particular bit of advice stayed with me. Choose a character trait for your main character that propels the humor. For instance, Roz, the main character in My Invented Life (Henry Holt, 2009), has fantasy moments that gave me countless opportunities to add humor and to show character development.

Once I write a funny bit, I use a related joke a second and third time, but often with a twist. Some readers dislike it when a writer does variations of a certain joke to death. To avoid this pitfall, I play with over a dozen running jokes in my story, usually relying on each one only a few times.

Another problem can arise from making one character funny, and writing everyone else as the “straight men.” I try to give each character their own sense of humor.

One last word of advice. Write what you think is funny. Are there ridiculous moments that crop up in your own life? Use them. For instance, my husband is a pyromaniac, which makes me laugh. So I found a way to work his crazy antics into my novel.