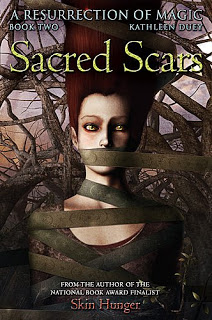 Writing a Twitter novel has given me back an artistic jolt I had almost forgotten: Raw Fear.

At a conference, I heard myself giving advice that I hadn’t followed in a long time.

I wasn’t experimenting with anything that scared me to death anymore.

That night, I inventoried the unbooked characters in my skull and noticed Russet.

I knew he was running from something, that he was scared, and that I was drawn to him. That was all.

I thought about giving him a word-file journal, channeling him every morning before I began writing my real projects.

Then I considered doing it publicly, on a blog.

Oh? That made me sit up straighter. But I had so little time—so many other projects already in progress. Blog entries take hours for me. I revise compulsively, like most writers.

That evening, I got an email notification that someone was following me on Twitter.

I tweeted a few times, enjoying that tiny-burst 140 letters/spaces/limit, and then it hit me.

A novel. A whole novel in Russet’s voice, written in Twitter’s 140 (or less) character bursts.

In public. Real time. No revision.

And when I thought about all the ways it could blow up in my face I felt almost sick. Bingo, eureka, perfect. I was scared to death.

Still am. But it has been worth it.

I start with Russet every morning: he tweets at http://twitter.com/kathleenduey, and then I update the full text on his blog. Only then do I go to work.

Next up: a YA collaboration called STAYS, The Faeries Promise books for second-to-third graders, A Virgin’s Blood, then Free Rat.

And I come to that work, wide, wide awake in a way that makes me remember how much I love writing. For itself. For the scary, exposed, amazing joy of it.

Read a Cynsations interview with Kathleen.