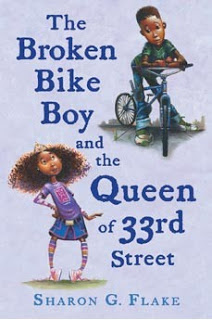 Note: The Broken Bike Boy and the Queen of 33rd Street is now available in paperback from Hyperion.

What kind of young reader were you? Who were your favorite authors?

I loved television more than I loved reading, I hate to say, but I did read plenty of books. I’d sit in the tub reading, lay in the living room reading or outside on the steps. Once I borrowed a friend’s book and ended up drying it in the oven after it ended up in the tub. Needless to say, the heat made a mess of the book, and I had to pay for it.

As a young person I loved to read Langston Hughes, and I also loved romantic novels, which during those days were pretty tame and low key which is why I guess most of my books have a bit of innocent romance in them.

Seventeen was one of my favorite novels. Although the characters didn’t look like me, the girls and I had the same heart and desire for love and romance. It’s what I love about books–everyone of every color and persuasion is invited to the party and encouraged to have a good time.

Wow. I didn’t write or know I had any writing talent in middle or high school. I majored in writing in college because there seemed to be so many other things that didn’t suit me.

After I graduated college, a few friends and I formed a writing group that didn’t last long, though the friendships are decades old. My friends showed me what was possible in the world of writing, while I was still scared and uncertain of myself. Because of Robin and Carla I wrote for a local magazine, got the cover stories for a B-level national woman’s magazine, and kept at this writing thing. I also had an article in Essence Magazine many years ago and went on to win a contest in Aim Multicultural magazine as well as the August Wilson Short Story Contest. I won a scholarship and attended the Highlights for Children’s Writing Workshop (go if you can; it’s great) and was fortunate to have my first novel The Skin I’m In win the Coretta Scott King New Talent Award and come out during Disney’s inaugural launch of Jump At The Sun.

I think learning to love rewriting is the single biggest thing. Once the Skin I’m In was accepted for publication, I got to see that rewriting is part of the game.

Before then I didn’t like it much. Now I love it because my work gets better and better each time I rewrite–even before an editor sees it.

I had only sent out a few pieces prior to being published. Some were for non-fiction articles; others were children’s books.

I remember a publisher in Washington wanted a book I had written about hair. It was text for a picture book. The publisher sent me a note saying he loved the book, but wanted me to make one small change. I got on my high horse and thought that if he loved, it than surely a bigger publishing house like Simon & Schuster or Clarion would love it even more. I never responded to the smaller house in Washington. I sent my manuscript to several larger houses.

Needless to say, the other houses didn’t want anything to do with it. They didn’t even suggest I fix or let me know why there were rejecting it–which is very common. I learned my lesson: don’t look a gift horse in the mouth, and sometimes you are not as good as you think you are.

The Skin I’m In is about a dark-skin girl who gets picked on because people don’t like how she looks. With the help of a teacher and wise words from her deceased dad, she learns to love the skin she’s in as well as her gift for writing. The book deals with self esteem and bullying. This remains my biggest seller.

Money Hungry–Raspberry Hill is thirteen and hungry for dough, but she won’t do just anything to get it. Having been homeless once, she wants to make certain the streets never see her or her mom again, so she works hard to save money but must learn that money isn’t everything and friends and family are really the most important things in life.

Begging for Change–Raspberry Hill is at it again, only this time her father returns and her mother is injured, so life feels more uncertain and fragile than ever for her. Family and friends and a new relationship with a boy from her past all help this young lady navigate life and treasure her personal values. The book deals with other issues as well, including father daughter relationships, biracial issues, romance and personal values. Raspberry and her friends are very popular with my readers–they love her and beg for a third book. Is one coming? Who knows? Perhaps.

Who Am I Without Him: Short Stories About Girls and the Boys in Their Lives. “Mookie in Love,” “The Ugly One,” “I like White Boys,” and “Wanted A Thug,” are just a few of the stories that enable girls and boys to sit around the same table or alone in their rooms and read about the challenging, romantic, funny and sometimes difficult road to relationships. Teachers and parents email me often about this novel, thanking me for giving them a vehicle to discuss relationships with the youth in their lives as well as with one another. Girlfriends have dumped their boyfriends because of this novel. Father’s have read it with their daughters. And adults have found that, yes, young men will discuss relationships.

Bang! With gun violence rising, I wrote this book to let people see what happens when a family member, a child, is killed. The novel astonishes teachers and parents, with how it enables youth of all cultures to open up about their own lives and to examine their own behavior and their potential to solve many of societies problems. The novel is fast paced and hard hitting with school districts around the nation using it in classrooms to empower youth. The book examines issues around grief, art, family and their ability to help us heal, men, grief and pain, the role that animals play in our lives, and empowering youth through literature.

Congratulations on the success of The Broken Bike Boy and the Queen of 33rd Street (Hyperion, 2007)! Could you tell us about it?

Queen Marie Rosseau is in the fifth grade. She’s smart and pretty, and her parents own the apartment building she lives in.

Across the street lives Leroy, a new kid, who lives in the housing projects. Leroy is teased about how he dresses, but Queen’s parents manage to see the royalty in him as well as their daughter. Queen will have no parts of that though, and is determined to prove that Leroy is not an African prince as he is telling everyone.

A mystical neighbor, a bully and a little humble pie help Queen to realize that being kind is a queen’s responsibility as well.

Along the way, readers realize that princes and queens live in every neighborhood, that castles are great places for dreaming and solving riddles. Learning about Africa and exploring friendship make for great reading in a novel.

I visit my hometown a lot. My folks still live in North Philly, and I love to walk and explore when I’m there. So many houses in that neighborhood remind me of castles. I saw one in particular one day. I thought about it and wanted to write a book about a queen.

When I visit schools I ask young people to tell me about the kings and queens in their neighborhoods. I ask them about the castles there too.

Sometimes they look at me as if I’ve lost my mind; even kids in wealthy neighborhoods do that. But then they catch on–castles are everywhere if we look for them and don’t expect them all to look the same.

During my talks, I’ve learned about a young man whose real grandfather was a king in Nigeria. Even his teacher didn’t know that. I’ve heard about cats being the kings at home and sisters who were wonderful queens and some who were not.

One boy told me that he was a prince.

I asked him what he did that would help me to see that he was a prince.

He made breakfast for his mom in the mornings, he said.

What kind of king does that make you? I asked.

Even his principal’s heart melted.

He lived in North Philly. Sometimes I think people forget there are loyal kings living there too.

The timeline was short, about eight months. My long time editor had left, but Disney was nice enough to let her still work on the book with me. I also had an in-house editor. Neither one of us had experience with working with illustrators, so that was a challenge. I’m sure we drove the illustrator crazy. But we all learned a lot, I hope.

I had to do research, which I hadn’t had to do up until then. There’s a riddle in the book. I knew which clues I wanted to give, but they had to line up with a certain country, and so I had to read about this country and that one. I’d find that my clues went well with one country, only to get to the end of the riddle and find something that wasn’t native to that land. So I’d tweek the riddle and start again, and end up someplace I didn’t want to be. It went well in the end. It’s my first and last riddle, I think.

So far, what is your favorite children’s-YA book of 2009?

I line dance, read, visit my family in Philly, talk with my daughter and walk my dog, Pharaoh.

You Don’t Even Know Me–short stories and poems about boys will be out in 2010. One young man gets married; one writes a love letter of sorts to his ‘hood.

I am also working on a book about a girl who has a reading problem and desperately likes a boy who is disabled. The problem is he doesn’t like her, and besides, she has other fish to fry like staying out of special ed, among others. It’s my first book about middle class young people. I’m not sure of the pub date, perhaps next year as well.