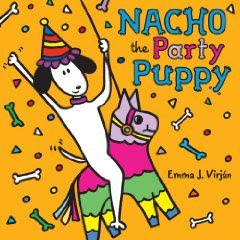 Emma J. Virjan on Emma J. Virjan: “I was born in San Antonio, Texas, under an Aries moon on a Wednesday evening, my Dad’s bowling night. This might explain my attraction to shiny, hardwood floors and crunchy, snack bar french fries.

“In first grade, I became permanently right-handed because Sr. Bridget refused to have left-handers in her class. After a successful high school career, I went off to college and had to decide between art, my all-time favorite subject, and medicine, a subject that intrigued me since the Christmas I received my first doctor’s kit and the game Operation. It was a course called Advanced Algebra for Scientists and Engineers that helped me decide on art. I never looked back.

“There were jobs at design firms and various advertising agencies. Then, I left Texas, my family, my friends and my job and moved East, to Connecticut, where I started my career as a freelancer and learned all about N’oreasters. After five years of that I decided to do my ‘own thing’ and Virján Design, a graphic design and illustration studio, was born.

“In 1999, I moved back to Texas and made Austin my home, where I continue to live my days as a graphic designer and illustrator.”

I was quite shy as a kid, so books were great company for me, and I was lucky enough to have learned to read early. I read anything I could get my hands on, from my brother’s comic books to the World Book Encyclopedia. Maps and diagrams fascinated me. I never complained about having to take a nap because I was allowed to take a book and my Big Chief tablet with me.

Lyle, Lyle, Crocodile by Bernhard Waber (Random House, 1965). Long before I could read this on my own, I would spend hours looking at the illustrations and making up my own story.

Amos & Boris by William Steig (Farrar, Straus and Giroux, 1971). William Steig is my absolute favorite children’s book author and illustrator. I love everything he did, but this story is by far my favorite.

Ten Apples Up on Top by Theo Lesieg (AKA Dr. Seuss), illustrated by Roy McKie (Random House, 1961). I like to count things. Always have. I liked the dog the most.

What made you decide to write and illustrate books for children?

I was so influenced by books as a kid that I decided that I wanted to write and illustrate them. My sister, Grace, who was a student at U.T. when I was in first grade, told me that meant I wanted to be an author and an illustrator. I thought those were the most exciting words on the planet.

On career day, I announced to Sr. Bridget (the same person who made me right-handed) my career plan. Unfortunately, she wasn’t very encouraging and told me that no one can make a living from art and that I had no talent anyway. Fortunately my family encouraged me to ignore her and continued to encourage me to draw.

When I realized that I very much wanted to be an artist, I chose the field of graphic design and illustration.

How did you train as a writer? As an artist?

I received my formal art training through college and copious continuing education classes.

I’ve never considered myself a Writer, with a cap W. I had some poetry accepted into college publications, but for the most part I write in personal journals.

When I lived in Connecticut, I took some writing classes and workshops and came to the conclusion that I liked writing and have continued to take courses since then.

Nacho, as a character was developed in a creative writing class I took at Parsons in 1995. He wasn’t part of an assignment; he was something that emerged while I enrolled in the class.

The class was taught by Esther Cohen,who is a published author. She was instrumental in not only encouraging me to develop Nacho, but in putting me in touch with my now agent, Edite Kroll.

From 1995 until 2006, I developed Nacho further and started writing stories around and about him. In 2005, I showed some of what I had to Esther and she told me it was time to get Edite on board because she thought I had something worth showing.

Edite and I then spent the next few months talking about what we should show. I had story book manuscripts and writings for a much younger audience, the one-to-four-year-old range.

Much to my own surprise, the writings and drawings that Edite and I both responded to were for the younger kids. I had always thought Nacho would start at the storybook level.

With Edite’s encouragement, I put together a board book manuscript with drawings, and she sent those to Random House. I was fortunate enough to meet with Random House in May of 2006. I met with Kate Klimo, the VP of children’s books. She liked Nacho, and by October of 2006, I had a contract for two board books.

The entire journey feels like a sprint and a marathon.

How did you react to the news of your first sale?

I wasn’t expecting it. I couldn’t believe it. I was in NY, and it appeared as if it was all playing out like a scene in a movie. I walked back to my hotel and when I got into the elevator, I told everyone there that I had just learned I was going to be published. Yes, I know I broke one of the rules of Elevator Etiquette by speaking, but I couldn’t help it.

Congratulations on the publication of Nacho the Party Puppy (Random House, 2008)! Could you tell us a little about the book?

Nacho the Party Puppy is all about celebrating your birthday the Nacho Way. It’s a board book with large flaps, textures, bright colors, and a few surprises.

If you want to have a swingin’ time at your next party, you definitely want to see how Nacho celebrates. He’s Nacho Average Pup.

I love dogs and love to draw, so I think it was natural for me to develop a dog character. He’s a combination of just about every dog with whom I’ve ever had the pleasure of sharing my life – Nippy (né Napoleon), Toby (né Tobias), Yum-Yum, Sugar, Spice, Brownie, Rugby, Charlie and Maddie.

As far as depicting him as a Party Puppy, I had just finished making my niece a birthday card and placed it on top of a Nacho drawing. I asked myself, “How would Nacho celebrate his birthday?” and started drawing him in different scenes – at a party, with a cake, singing a song.

After a few dozen drawings, I started working on the text. When I had the text I liked, I drew the corresponding illustrations and strung it together.

The biggest event that happened in that time frame is that I moved back home to Texas. Connecticut is beautiful, but there isn’t enough Mexican food. And shoveling snow isn’t as fun as it looks in movies.

Most of my family is in San Antonio, so Austin is the perfect location and it feels like home. Upon my return, I had considered getting a Real Job as my mom calls it, but I had already tasted the life of a consultant while in Connecticut, so I decided to continue with hanging out a shingle and focused on growing my graphic design and illustration business, Virjan Design.

The biggest challenge was my Internal Revision Process. After finishing a drawing, I’d think of another way to depict what I wanted and would redraw, redraw, and redraw.

Some of that was helpful. Some of that was frustrating and basically got me nowhere near a finished drawing. I had to work at teaching myself to stop and move onto the next one.

And just when I thought all of the drawings were done, I’d get it in my head that I should review them one more time!

Thank God for my agent who said, “Send them. Now.”

What was it like, being a debut author-illustrator in 2008?

I’m thrilled, humbled, concerned that people won’t buy the book, addicted to the process and overall very pleased with the accomplishment.

If you could go back and talk to yourself when you were beginning writer-illustrator, what advice would you offer?

I think I would give the same advice I give myself today and that is to keep drawing and writing, even if it’s a tiny sketch or an idea that hasn’t been completely formed.

The blank page can get a little scary sometimes, so I find it best to mark it up as quickly as possible, rendering it no longer blank. If I don’t like what I drew or wrote, I can always try drawing or writing it again.

Other than your own, what were your favorite children’s books of 2008 and why? 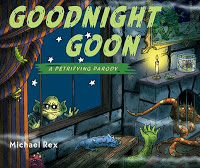 Goodnight Goon: A Petrifying Parody by Michael Rex (Penguin Group). I like how the author took a classic bedtime story and changed it to include things you wouldn’t normally consider at bedtime, like mummies, tombs and lagoons. Werewolves have to go to bed too, so it makes sense that their goodnight ritual would involve saying goodnight to something other than kittens or mittens.

Daft Bat by Jeanne Willis, illustrated by Tony Ross (Sterling Press). Everyone thinks the bat is daft because he sees things differently. He says the sky is at his feet. For him, it is. I loved the premise of seeing everything from his point of view. And I loved the illustrations. There’s a simplicity to them, but they also convey a lot of information.

How do you balance your life as a writer with the new responsibilities (speaking, promotion, etc.) of being a published author-illustrator?

I’m enjoying every bit of it. I just started book events and school visits, so I’m learning how much I can do comfortably and reasonably.

I spend my days as a graphic designer and illustrator. My life also includes hanging out with family and friends, going to movies, spending time outdoors, especially working in my yard, reading fiction, fiction and more fiction.

Nacho the Downward Dog, a yoga board book for kids releases in Fall 2009. In this one, Nacho and his friends teach us how to strike various yoga poses.

I’m also working on a story for young readers that features Nacho and his girlfriend, Holly Penyo, as they go on an adventure.

In the meantime, folks can visit Nacho’s web site, www.NachotheDog.com and join his birthday club, download coloring pages, and hear My Name is Nacho, written and performed by Austin’s own Ray Benson, with Asleep at the Wheel.

Nacho Average Pup: an in-depth article from Mark G. Mitchell at How to Be a Children’s Book Illustrator.