Brazos Price on Brazos Price: “After graduating from the University of Texas at Austin School of Information in 2006, Brazos began working full time for the Austin Public Library Youth Services Division. As an extension of his graduate work, he became a part of the Second Chance Books Project. Today, Brazos is a member of the Second Chance Books Leadership Team and is responsible for the collection at both of the satellite libraries.”

What is Second Chance Books?

Second Chance Books is collaboration between the Austin Public Library and the Gardner Betts Juvenile Justice Center that results in books, book talks, book clubs and readers’ advisory to youth who are incarcerated in either a pre- or a post-adjudication facility here in Austin, Texas.

What was the initial inspiration for the program? How did it get started?

It started when Devo Carpenter (a youth services programming specialist with the Austin Public Library) went out to the center and noticed that it didn’t have a library. She then vowed to do everything that she could to make sure that everyone there has an opportunity and the appropriate material to read. To work towards connecting every reader his/her/hir book.

Who is behind it?

Second Chance Books is a joint project between the Youth Services Division of the Austin Public Library and the Gardner Betts Juvenile Justice Center.

On the Library’s side of things, there are approximately 10 people in Youth Services that spend some portion of their time with the project.

Devo Carpenter started the project several years ago, and I joined on as a graduate student working on a project and continued after I was hired on full time by the Austin Public Library.

Who does it benefit?

First and foremost, it benefits the residents of the facilities. Residents don’t have many choices, and giving them the option of reading a book that is interesting to them is a wonderful thing. So I’d say that they are the biggest beneficiaries of this project.

Next I would say it benefits the facility, administrators, and teachers at these facilities. They’ve said numerous times how valuable the collaboration has been.

Why is this an important population to society? To you personally?

I’ve been interested in prison issues since my time at university as an undergraduate. I became involved with a political organization that opposed privatizing prisons and was immediately interested when I first heard about the Second Chance Books Project. It reminded me a bit of an organization I was already aware of, the Inside Books Project, which sends books to adult prisoners in Texas.

Anyway, this is a long way of saying that it combines two of my “loves” in reading and prison issues, so it immediately appealed to me on a personal and professional level.

From the standpoint of society, I’d say that I think that we need to reevaluate much of what’s going on in the criminal justice system. The U.S.A is already imprisoning more of its population than any other society in recorded history. This is unsustainable and true rehabilitative measures need to start sooner rather than later.

It’s sort of obvious, but prisoners are an incredibly oppressed group in this country; whether or not they deserve it, something should be done to alleviate the social, economic, and culture pressures that have resulted in this abundance of prisoners.

This is a roundabout way of saying that the population that Second Chance Deals with is incredibly important to our society, and every effort should be made working with this population.

What results of Second Chance Books have you witnessed? 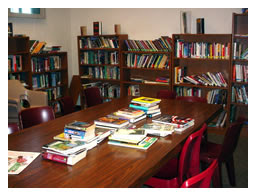 Personally, I’ve witnessed several successes of this program. It has been an opportunity to connect with youth from all over the city and help instill a love of reading with readers’ advisory.

In addition to this, it also helps to forge a personal connection with the residents that ends up translating into a library visit. That’s the best part, getting to see these youth back on the outside and asking them how they liked the book that you recommended to them on the inside.

How is the program financed?

Originally, the libraries were furnished with books from the Friends Austin Public Library as well as donations by individuals and publishers. As the program has evolved, we’ve secured funding through the Youth Services division and now have an annual budget devoted to books for the centers. Other things that we do are financed through staff time, grants and awards from funding agencies.

How can people help/support the program?

What is your vision for it in the future?

I’d like the see the program serve as a model, modular, easily extensible program that other libraries can take the parts that they like and adapt it to their specific situations. That’s what we are working on right now; it’s slow going as most nuts-and-bolts organizing often is.

To what extent do programs like this exist in other cities?

I’m not personally to up on what other locations around the country are doing… I know that Hennepin County libraries are doing some stuff, and Devo was on a panel with some other folks… so there definitely things happening on this front.

What sort of outreach/leadership are you doing on this front?

We’ve done several presentations at library conventions, like the aforementioned one that Devo was on.

What do you do outside of the library world?

I read comic books, play basketball, and go on long walks in the moonlight with my lovely girlfriend.