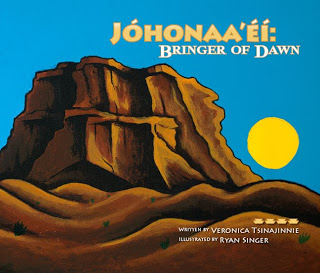 The Lacapa Spirit Prize is proud to announce its 2008 winner. Named for Michael Lacapa, children’s book illustrator and writer who died in 2005, the award honors the legacy of his artistic vision and talent for storytelling. This prize acknowledges great books for children that best embody the spirit of the peoples, culture and natural landscape of the Southwest. Books published in the two years prior to the award are eligible for consideration.

The 2008 Lacapa Spirit Prize for Narrative was awarded to Jóhonaa’éí: Bringer of Dawn by Veronica Tsinajinnie, illustrated by Ryan Singer, published by Salina Bookshelf Inc.

Jóhonaa’éí: Bringer of Dawn is a beautiful and peaceful story of the relationship the sun has to the earth and its inhabitants as he rises every morning and brings dawn. Veronica Tsinajinnie’s bilingual narrative is powerfully subtle in its presentation of Navajo culture. The story chronicles the journey of Jóhonaa’éí, the sun, as he passes over land, plants, animals, and humans, ushering in a new day. After Jóhonaa’éí wakes the field mice, the rabbits, and the sheep, he is “contented to know his job is done…” He finally arrives at a hogan door to wake “his children” who live inside. The sun then watches as the family offers “white corn to the morning spirits” and “give thanks to the bringer of dawn” before they begin their day also content to know that their job is done as well. Young readers will delight in Tsinajinnie’s progressive repetition, recognizing the daily path as one they, too, walk. 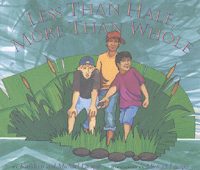 He was an exceptional storyteller and the talented illustrator of such books as The Magic Hummingbird, Spider Spins a Story, and The Good Rainbow Road. He is the author/illustrator of The Flute Player, Antelope Woman and Less Than Half, More Than Whole, the latter co-authored with his wife Kathy.