The line-edits revision of my upcoming YA Gothic fantasy, Eternal (Candlewick, 2009), went out via electronic copy to my editor this morning.

Eternal is set in the same universe as Tantalize (Candlewick, 2007), featuring different main characters and building on an overarching conflict in the fictional world.

Globally, I had been asked to further underscore the evolving relationship between my two alternating point-of-view characters and the back story of one of them. 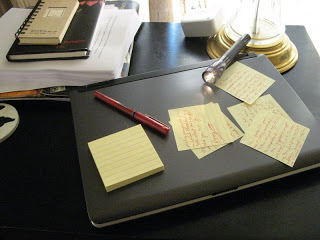 With dynamics like that, insights often come to me at, say, 3 a.m. Check out the photo above of my nightstand. I keep a hard copy of the manuscript close (so it will continue to bleed into my brain) along with my little notebook, my laptop (in case electronic vibes are stronger than print), as well as a red pen, a pad of Post-It notes, and a little flashlight. What you see here is the morning-after result of one night’s scribbles.

With the wee light, I don’t have to wake up my husband and sometimes co-author, Greg Leitich Smith, but I’ve also found that turning on the lamp can douse my brainstorm.

Beyond that, much of my attention went to scene-by-scene smoothing for language and logic. I’ve previously shifted the timeline twice, so I triple checked that and clipped one unnecessary day. I also reorganized the flow of a few scenes and considered each word choice for impact.

One challenge that I’ve been aware of throughout the writing of this novel is that it’s my first full-length book with a male (albeit in this case alternating) point of view. I’ve been working up to writing cross-gender for a while.

But a novel is different. A beast. It’s one thing to create a voice, another to sustain it over time.

Perhaps because Greg is likewise an avid reader and novelist, I’ve found myself in a remarkable number of conversations about portrayals of boys in youth literature. I’ve followed with great interest the related conversations at Through the Tollbooth and in the Horn Book Magazine (“Boys and Girls” (September/October 2007))(editor interview).

Having already published Tantalize, of late I’ve had an opportunity to speak and correspond with a lot of YA readers. I’ve made a point of asking about depictions of boys. Based on my anecdotal experience, with the traditional caveat about generalizations…

It seems that some boys don’t believe most books by women (or, for that matter, many men) show them as they are and that, furthermore, YA lit overall has a feminine feel. This sometimes alienates them to varying degrees.

Girls, on the other hand, are just fine with that “feminine feel.” When asked, many will say that they have quite enough of real-life boy attitudes/behavior to deal with, thank you. They much prefer boys in books to be the way they wish their real-life counterparts were.

So, what does that mean (other than the fact that it’s impossible to please everyone)?

I’d bet the majority of my readers are girls. But I get enough of a response from guys to know they’re a significant part of my audience, too. I also have to wonder if the leanings of adults in youth literature mirror their younger gender counterparts. If so, that becomes a gatekeeper issue.

It’s interesting! An intriguing topic in the greater conversation of books. Certainly, authors should be aware of any gender biases in the body of literature.

But as a writer, how do I apply all this?

I keep in mind that I may be inclined to undercut and/or misrepresent my male protagonist’s gender-related perspective. I watch out for that. I also watch out for my trying to overcompensate. I listen to Greg when he double takes at a word choice or reaction. I carefully consider my editor’s feedback.

But mostly, I stay true to the individual character. Who he is. Where he’s coming from. How he feels and why. In this last draft, I made more of an effort to clarify his motivations. Readers will understand his behavior/point of view, even if a few don’t always agree with it.

Reading aloud for flow, typos, missing words, and so forth is my last step. The read-aloud is necessary in part because I’ve already read the manuscript quietly so many times. At this point, I’m prone to reading what I meant for the text to say, not what it actually does. Actually, that’s such a big problem that I can’t even read the manuscript aloud myself. So, Greg does it for me. 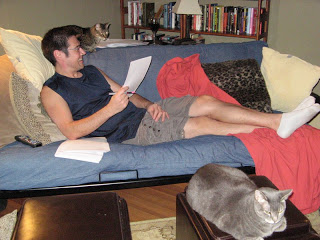 This past weekend, he read Eternal to me in our second-floor reading room (see Greg above with Leo, who’s perched on the back of the sofa futon, and grumpy Mercury on the leather ottoman) while I followed along, red pen likewise in hand.

It took about nine hours, spread over Saturday and Sunday, pausing occasionally to double check a previous reference in the manuscript, find a better word, or resolve a question/inconsistency.

Greg began with a glass of water, then switched to hot tea with honey, and finished with a thematically appropriate glass of red wine.

Once we finished, I keyed in changes, which took longer than it might have because I verified the spelling of every proper name in the manuscript along the way. Only one was incorrect.

Here are the current manuscript stats:

Eternal: the Cut-and-Paste Report from Spookycyn.