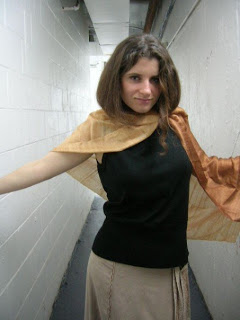 “Absynthe Muse is an international community of young adult writers who are serious about writing and getting published.”

Elisabeth Wilhelm on Elisabeth Wilhelm: “Elisabeth is an aspiring novelist and wonders if she should stay that way, after spending six months as a literary agent’s assistant at Firebrand Literary. When she isn’t wracked with sobs reading really bad queries or dealing with coding problems as Editor-in-Chief at AbsyntheMuse.com, Lis can be found in a public high school somewhere in Brooklyn, beating small children with her gavel, introducing them to international relations and the Model UN experience. Or, more likely, she’s procrastinating from classwork at Pratt Institute, where she’s a sophomore majoring in creative writing, also known as the live-in-a-box-when-you-graduate track. But dammit, she’ll be happy!”

I’m totally wowed by Absynthe Muse! Could you give our readers an overview?

First of all, to my knowledge, our young writers’ community is the only website out there named after an alcoholic beverage. We decided Super Teen Power Writing Website was a really stupid name, so we chose something that had a sense of history, straight from the Bohemian movement in Europe around 1900, where young artists of all types imbibed in absinthe. They called it their green muse. Naturally, we don’t condone underage drinking of any kind, but all of Absynthe Muse’s members have a muse that moves them to write great things.

Absynthe Muse is an online community of young writers, ages 13 to 25, who want to connect with other young writers, regardless of where they happen to be located. We’ve got about 1,500 members from over 30 countries, and all their talent and passion makes AM a wonderful place to be as a young writer.

We hold the idea of karma in high esteem, which is why we host Absynthe Muse Projects, member-led writing initiatives. These have included the Little Owl Mentoring Program, connecting over 160 young writers with 180 writing mentors from all walks of life, all online.

The Internet is the great equalizer for us, and we feel that we can touch the lives of young writers who may not have such opportunities in their home communites. We also have the Jelly Paint ezine, hosted several writing classes taught by experienced young writers, and held several writing competitions. So much more is in the works for 2007, including gaining nonprofit status in New York state.

How did Absynthe Muse get started?

I grew up on military installations in Germany. There was no such thing as a creative writing class in middle or high school, so I decided to solve the problem myself. I went online and sought online communities, including the famed Teen Writers Dream website, which is sadly now defunct. However, I realized in all my experiences of online writing communities, I could do things better, and push others to help other young writers around them. So, I created AM.

How has it changed over time?

AM was actually a static site in early 2005, but I made the leap to Mambo, and then Joomla! open-cource content management system (CMS) software, that gave me much more flexibility on how the site looked and what kind of content it could retain. Joomla! and mambo both run on MySQL databases, things I really didn’t understand when I started out, so through trial and error, and several website crashes, I expanded AM to include a forum, chatrooms, a private messaging system, polls, a classifieds section, and other fun parts of the site. However, I’m no coding expert, and still go apoplectic if a MysQL error runs across the top of the site when it’s loaded.

In terms of membership, we’ve grown internationally, and have won several awards and even a grant! We’re even getting groupies! We are also getting more article submissions and more proposals for Absynthe Muse Projects, and more libraries and other writying organizations are sending their young visitors our way. The more the merrier! However, the jovial, welcoming spirit that has always characterized AM will continue to characterize it.

What are the greatest challenges?

Funding. It’s one of the reasons why I’ve been pushing so hard to turn nonprofit. There is so much good that AM can do, but it’s all run by poor college students, so we are often hampered in putting our ideas into action by the limits of time and money. In my pie-in-the-sky wish list for AM, there would be a yearly AM conference in NY, a publishing house attached to AM, as well as our own cafe where patrons will be encouraged to scribble on the green tablecloths with permanent marker.

Our community has been so generous in giving their time and effort to making AM great, but right now, support ands guidance from adult writers is what we need most.

I am the daughter of a woman who was both doctor and soldier. She never did things the easy way, and neither do I. I relish taking the challenges that confront AM head-on. Hope Clark, the editor of fundsforWriters.com and co-founder of the Little Owl Mentroing Program, and I were approached by Jane Guttman, a wonderful woman who has a vocation that’s downright saintly–she’s a librarian at an incarceration facility in California. And she wanted us to tailor the mentoring program to her kids’ needs.

One thing led to another, and I found myself in the outskirts of LA two days after Thanksgiving, teaching a class of boys how to fold a paper crane. Then, I explained what a haiku was, and we clapped our way through an example, before I had them write their own across the wings of their paper cranes. Their poems were heartbreaking–many of them about the harsh lives they had come from, others about the bad food, and still yet others about the family members they missed. Later, Jane would tell me that this is probably the first time that some of these boys have ever accomplished anything like folding a paper crane, with the praise I gave them. Most of them have never written a poem before.

I had been filled with some doubt with what direction AM was going to take, after a drawn-out paper trail and lawyer stuff, where I just felt like beating my head against a wall. However, between the boys and the girls in maximum security writing their secrets out on postcards to be mailed to PostSecret the next day, I had found the reason for why AM must go nonprofit, why it must become not just a good website, but a great organization dedicated to young writers everywhere. Not everyone has Internet access. Not everyone is fortunate enough to have been encouraged as children to read and write at home. Not all students are given creative outlets through which to express themselves.

AM is going to change that, one young writer at a time.

What advice do you have for other young writers?

You don’t need to get published before you’re legal to drink—there’s so much to life you’ve still got to experience, but don’t ever let anyone tell you that you don’t know enough about life to write a book about it. What you know can fill tomes, but it’s just a matter of writing it down, going at it with a chainsaw, rewriting it, and never giving up when seeking feedback, and perhaps even publication. Remember that just because you’re 13 and a novelist submitting your manuscript to a publisher, you don’t and should not get special consideration. No matter how old you are, what blood type you are, or how many As you have on your report card, at the end of the day, your writing must shine. It must outshine all the old people who are also in this writing rat race.

Having said that, you’re way ahead of the curve on this writing thing. Turn your brain into a sponge and suck up everything around you. Watch people. Study abroad. Wear mismatched socks. Write really bad poetry. Laugh about it. Write better poetry. Read the backs of shampoo bottles. Whatever you do, don’t lose your love for words and the world you live in. Remember, a boring person is a boring writer. And being zit-faced in this day and age is far from boring.

As a reader, what are your favorite young adult books and why?

My favorite book in middle school was The Blue Sword by Robin McKinley (Ace, 1987). It’s about a kidnapping, tall, dark, handsome men in the desert, and a heroine who is as stubborn as a barnacle, and about just as fragile. What makes it even better that Robin had written it, almost in a rage, as a reaction to The Sheik by E.M. Hull, the quintessentiall bodice-ripper romance of the 30s. This was a fantasy story where helpless damsels were nowhere to be seen, and romance was pretty much an afterthought. I still sometimes try to fall asleep hard enough on some nights, hoping I wake up in that world.