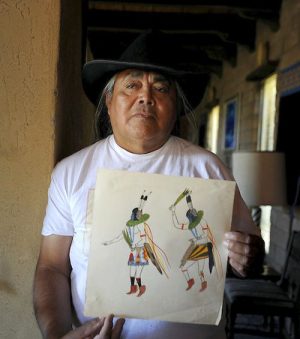 Obituary: Irving James Toddy from The Navajo Times. Peek: “Irving was born Feb. 4, 1951, in Ganado, Arizona, into the Bit’ahnii (Folded Arms People Clan), born for Red Streak Across Forehead (Zuni). He passed away Nov. 25, 2020, in Farmington. Irving received a master’s degree from Utah State University and was a self-employed artist.”

He grew up surrounded and inspired by art. In 1983, his passion for art led him to Utah State University where he studied painting and illustration, eventually earning a Master of Fine Arts degree in the field. Toddy became known as a “Gallup Realist” due to the realistic nature of his work. He often painted scenic images and realistic portrayals of Native people.

Over time, Toddy would receive multiple awards and acknowledgements for his work, including the Patrick Hinds Swazo Award for Most Promising Young Artist as well as first, second, and third place awards at the Santa Fe Indian Market, and numerous honors at the Gallup Inter-Tribal Indian Ceremonial.

Toddy lived a life dedicated to art and family. He is survived by his wife Stella, six children, 12 grandchildren, and their extended family.