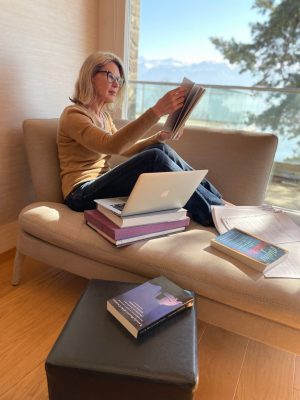 A little over four years ago, my husband Chris and I were reading the Sunday New York Times, when he noticed a tribute to the astronomer Vera Rubin, who had died the day before. He suggested that I write a picture book about her. Although I was fascinated by Vera, I had a feeling that the perfect author for this project was my friend, Sandra Nickel, a fellow graduate from my MFA program at Vermont College of Fine Arts.

I have never been more right! The Stuff Between the Stars: How Vera Rubin Discovered Most of the Universe (Abrams, 2021) lyrically weaves Vera’s personal journey with her evolving vision of the cosmos. Aimée Sicuro’s beautiful illustrations are similarly poetic, making this one of those books that absolutely sings. Today, I am delighted that Sandra is here to tell us more about the creative journey she embarked on while researching and writing this book. 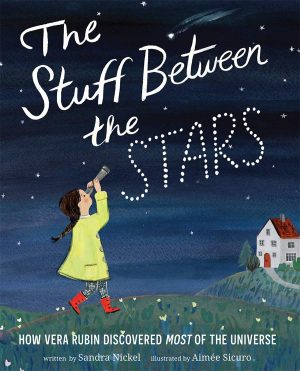 What in particular spoke to you about Vera’s life when you read her obituary?

The New York Times spoke about Vera ushering in a “Copernican-scale change in cosmic consciousness” with her discovery of dark matter. At the same time, it highlighted a life full of joy and generosity. She raised a happy family. She made time for young scientists. She was delighted by each small discovery she made. I was drawn to that rare combination of rich humanity and immense achievement.

I was also heartbroken that Vera had not received the Nobel Prize in Physics. She had transformed astronomy and modern physics, yet had been passed over for the Nobel for nearly 40 years. All women had been. So, knowing that she would never receive the spotlight of recognition the Nobel brings, I started my research that day. The least I could do was tell children all over America about her.

It’s clear that you did a tremendous amount of research for the book, can you talk about that process?

I’m not a physicist or an astronomer. I’m someone who is curious. And someone who—because of her great admiration for Vera—became extremely motivated to understand her work. I started off by reading Vera’s book, interviews, and articles. Then I read what others said about her. After that came articles about dark matter and gravity. I read and reread, cycling time and again through the interviews, books and articles. I didn’t want to simply repeat what others said. I wanted to understand Vera’s work profoundly enough so that I could create metaphors and unique imagery.

I really love all of the lyrical language and beautiful metaphors you used in this book, not only to describe astronomical concepts, but also to describe Vera’s personal and professional life. Can you describe the process of creating that imagery for the book?

From the very beginning, I worked hard on the imagery of astronomy and dark matter so that children would be able to understand. Beyond that, it was my editor Maggie Lehrman who encouraged me to strengthen the thematic links between Vera’s life and work. The story had rested in my mind during the submission process. By the time I opened the manuscript again, the metaphors between Vera’s personal and professional life were already written between the lines. They were glaringly obvious—even though I hadn’t picked up on them before. At that point, it was just a matter of creating new phrases and rearranging words until they were smooth and beautiful in my own mind.

The title of the book is really wonderful. How did you come up with it?

Credit must be given where credit is due. It was Maggie who came up with the title. Although, it could be said that Vera herself suggested it.

In 1996, she gave a graduation address at the University of California, Berkeley. She closed her speech by saying: “Each one of you can change the world, for you are made of star stuff, and you are connected to the universe.”

The optimism and encouragement embedded in those words are quintessentially Vera Rubin. Because of that, they were given a double-page spread of their own, and I chose them to be the echo at the end of the book.

Aimée’s Sicuro’s art for the book is just gorgeous. What was the process of working together like?

From her first sketches I realized that her art was not only beautiful, but that she had done a lot of her own research. It was clear that she had found photographs of Vera, the instruments she worked with, the clothes she wore.

It was also clear that Aimée had pondered over the best way to communicate ideas. Her questions for me were very specific. Could I provide one of Vera’s equations? Do children at a playground spinning wheel work as a metaphor for the then-held belief that stars at the edge of a galaxy move slower than those at the center? It was an absolute delight working with someone so talented and thoughtful.

What do you find most inspiring about the life of Vera Rubin?

That’s a hard one, because I admire so many things about her. Today, at this moment, I will say: The way she lived life on her own terms. She didn’t like the harsh words male astronomers flung at her. She also needed to move more slowly in her research because she spent time with her children. Because of both of these, she studied questions the other astronomers weren’t interested in.

The great victory is that by making that choice, she discovered evidence that dark matter existed. She ushered in the “Copernican-scale change in cosmic consciousness” the New York Times talked about. Isn’t that marvelous?!

It is marvelous and profound! It’s my favorite part of her story.

Thanks so much for speaking with Cynsations, and best of luck with the book, Sandra!

See Sandra and illustrator Aimée Sicuro’s recent appearance at Flights of Fancy Story Time for the Smithsonian National Air and Space Museum. The video includes Sandra reading the book, a discussion of Vera Rubin and Aimee demonstrating how to paint a galaxy. 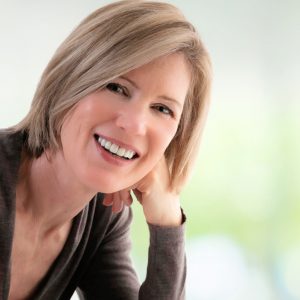 Sandra Nickel writes books and poetry for young readers. In 2021, she has two books coming out: The Stuff Between the Stars: How Vera Rubin Discovered Most of the Universe and Breaking Through the Clouds: The Sometimes Turbulent Life of Meteorologist Joanne Simpson, illustrated by Helena Perez Garcia (Abrams Books for Young Readers, Fall 2021).

Sandra holds an MFA in Writing for Children and Young Adults from Vermont College of Fine Arts and has presented workshops on writing for children and young adults throughout Europe and the United States. Sandra is a two-time winner of the Katherine Paterson Prize for picture books and a finalist for the Society of Children’s Book Writers and Illustrators Golden Kite Award. Sandra is represented by Victoria Wells Arms at Wells Arms Literary/HSG Agency. 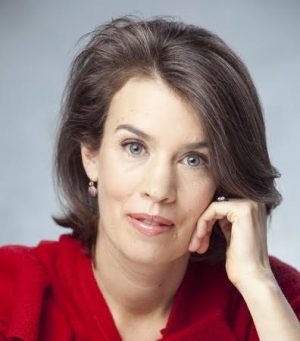 Kate Hosford graduated from Amherst College with a degree in English and Philosophy. Before becoming an author, she worked as an elementary school teacher, a social worker, and an illustrator. In 2011, she received her MFA in Writing for Children and Young Adults from Vermont College of Fine Arts.

In addition, Kate is also the author of  Mama’s Belly, illustrated by Abigail Halpin  (Abrams, 2018) and A Songbird Dreams of Singing: Poems About Sleeping Animals, illustrated by Jennifer M. Potter (Running Press, 2019).

She lives in Brooklyn with her husband and two sons. Kate is represented by Victoria Wells Arms at Wells Arms Literary/HSG Agency.