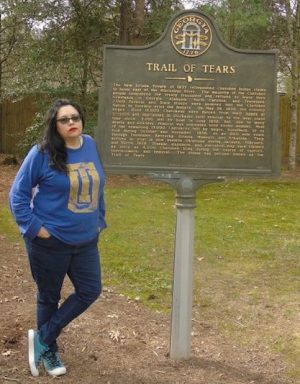 I met Andrea at Kweli’s Color of Children’s Literature Conference in New York City in 2018. Andrea is a citizen of the Cherokee Nation of Oklahoma.

Her debut middle grade book is Mary and the Trail of Tears: A Cherokee Survival Story (Capstone, 2020). It’s the story of twelve-year-old Mary and her family, who were forced out of their home in Georgia by U.S. soldiers in 1838.

Part of the Capstone Girl Survival series, the story explores the tragedy of forced removals following the Indian Removal Act of 1830.

I think the most important literature in the world is written for and read by children.

As a kid, I never read a single story that I could relate to as a brown girl. There were no families like mine or characters like me. I have always wanted to see this story told. It was pretty exciting that I was given the opportunity to tell it.

How did writing Mary and the Trail of Tears: A Cherokee Survival Story come about?

I’m in a Native writing critique group. A friend of mine who helps organize it was contacted by Capstone about writing a book about the Trail of Tears. She is super successful as a writer and super busy, so she referred them to me.

They contacted me and outlined the project and deadlines. I sent them samples of my work. Based on that, I got the opportunity to tell the story about my tribe that centered a young Cherokee girl.

This was exactly the kind of story I wish I had been offered when I was a kid. It was pretty exciting, but also frightening and challenging and heartbreaking.

The biggest challenge for me is always finding the time to do the work and do it well. I work full-time as an art teacher, and I have three daughters as well.

An equally difficult challenge was the quick turnaround time in publishing. In this case, I had to run things by researchers, and it was imperative to get it right. I didn’t have the luxury of time, which meant I had to ask people who were helping me for mercy and grace.

Luckily, it was important to the Cherokee historians that I get the story right. I also had to check with Cherokee experts in language, art, and culture and they were very kind to me.

Another challenge was the research. I didn’t feel like I could tell the story without visiting the homeland of my people and seeing some of the trail. We went to Cherokee, North Carolina; New Echota, Georgia; and many places in between.

For my writing, it was indispensable to the story. The challenge I didn’t foresee was dealing with historical trauma.

Visiting the sites of the internment camps, seeing the places where my people were buried, gave me a much better sense of what my people went through.

It was tough stuff. I wanted to be honest, but also careful with young readers. It was painful for me as a writer, though.

The worst moment was three days before my manuscript was due, I realized my contract said the story had to be in first person and I had written it in third. That was a rough weekend of rewriting. I think it actually helped the story though.

Since my manuscript became a book, there have been so many best moments. My cousin posted a picture on Facebook of my book and reminded everyone that he was living on the land my dad grew up on.

My aunt has trouble seeing. She is amazing. She worked for Indian Health Care in Oklahoma City as a nurse for a long time. She was volunteering there into her 80s. She is the oldest child in my dad’s family. My cousin goes to visit her on Sundays, and he was reading my book to her. She called me to talk about it afterwards, and that really touched me.

I talked to several Cherokee people who are experts on various aspects of Cherokee culture. They read the book and loved it. A few of them bought copies, not just for their children and grandchildren, but for teachers of those children.

Diverse communities have supported me and my book. The love they have had for me has blown me away. It’s in the library of my hometown. My favorite college professor called it “magnificent.”

I got to go to a Reading Rock Stars event and see [fellow Cherokee children’s] author Traci Sorell give copies of my book away.

I hope there are more “best” moments, but there have been so many that I could never have predicted.

As a member of a community underrepresented in youth literature, what did your perspective bring to your story?

I definitely thought about how I would want my relations to internalize this story. The balance of presenting historical fact versus what a child would never be able to unread was tricky.

Also, this is the story of my ancestors. I felt so much responsibility in the telling. These are my people. I feel that in my heart.

Write the best work you can, and don’t waste time. Sometimes making your work better includes finding other readers, hearing another point of view.

Most of us have some kind of blind spot.

Be ready to reciprocate for people who help you make your work better, but be picky about who you’re asking to read.

Make sure you show your appreciation for their gift.

While you’re sending work out that you feel is ready for the world, keep writing. Have other manuscripts ready to go once you have connected with an editor or agent. Make time in between the queries to tell another story or four.

Come up with a good (electronic) filing system. That is something I am still working on.

Andrea L. Rogers is a citizen of the Cherokee Nation of Oklahoma and a graduate of the Low Rez program at the Institute for American Indian Arts.

She grew up in Tulsa but currently lives in Fort Worth, where she is a teacher at an all-girls public school and the mom of three daughters.

At IAIA, she was mentored by several strong Indigenous writers and teachers. While there, she completed her short story collection, “Man Made Monsters,” a meditation on love, loneliness, family, and the monsters in society that walk with us.

Native people are centered in this collection, along with a cast of vampires, werewolves, zombies, aliens, ghosts, two handsome princes, and a Goatboy.

Her short stories have been published in Transmotion; Kweli Journal; Yellow Medicine Review; and The Santa Fe Literary Review. Her children’s book with Capstone, Mary and the Trail of Tears: A Cherokee Removal Survival Story came out in January 2020. Her essay, “My Oklahoma History” is included in You Too? 25 Voices Share Their #MeToo Stories (Inkyard Press, 2020).