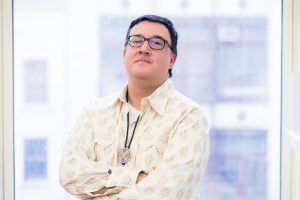 David is the author of Spotted Tail, illustrated by Jim Yellowhawk and Pat Kinsella (Reycraft Books, 2019), a middle grade biography which traces the life of his tribe’s famous Lakota leader.

David, your book has received many accolades. Congrats on winning a Spur Award for the Best Juvenile Nonfiction book in 2019 from the Western Writers of America, being named an AICL 2019 Best Book Award Winner, and being announced as a finalist for the 2020 Colorado Book Awards!

I’m the proud father of two sons, David and Sasha, and some of my happiest moments were reading to them when they were young.

We are enrolled citizens of the Sicangu Lakota Nation, and I tried to read as many multicultural children’s books to them as I could. But, there were too few of these available back then (and I’m delighted that this is beginning to change!).

It became my goal to write inclusive work for kids—the kind that I wanted for my own children. Although I have an MFA degree in creative writing, I’d focused upon adult fiction in my formal training. I started from the drawing board and began reading everything I could on writing children’s literature: craft books, picture books, middle grade, young adult books. Over time, I began to gain confidence, but it was a slow process—and definitely worth the effort!

What was your initial inspiration for writing Spotted Tail?

I’d been aware of some of the wonderful middle-grade and picture books focusing on Native leaders from the past: S.D. Nelson’s books on Sitting Bull (Abrams, 2015) and Red Cloud (Abrams, 2017) are two great examples.

But I was always discouraged that there were no children’s books about the great leader of our nation, Chief Spotted Tail, and that Sicangu children had to read about other chiefs, not their own. Spotted Tail is less well known than many other famous Native American leaders, but his life story is very inspiring.

When Reycraft Books issued a call for new diverse books, I didn’t hesitate. I immediately contacted them and gave them my idea for a middle-grade biography on the life of Spotted Tail.

Happily, Reycraft accepted the proposal immediately, and they hired some amazing illustrators. The Native artist Jim Yellowhawk created the art along with Pat Kinsella.

The book uses a very innovative hybrid style: part visual art and part photography. This concept was created by my wonderful editor, Wiley Blevins, who deserves all the credit, along with Jim Yellowhawk and Pat Kinsella.

The book also contains modern ledger art, a unique Native artistic style that used the ledger paper from accounting books as the canvas when traditional bison hides became scarce in the late 1800s. I think the illustrations in the book are fantastic, and I’m so proud of the final result.

I began writing fiction and creative nonfiction seriously about ten years ago. I’m a professor of Native American studies and political science, but have always been obsessed by literature.

I took a number of courses at a local writing center, and then began my studies in the MFA program at the Vermont College of Fine Arts. However, I transferred to the new MFA program at the Institute of American Indian Arts when it began and was one of the very first graduate students there.

I honed my writing at IAIA, but I’ve discovered that you should never stop working on your craft. I’m reading a number of writing books right now, including a new book by Chuck Palahniuk, Consider This: Moments in My Writing Life after Which Everything Was Different (Grand Central, 2020), and an older volume from Jane Smiley on the art of the novel, 13 Ways of Looking at the Novel (Knopf, 2005).

In terms of publishing, how did you navigate the process of finding an agent and, with their representation, connect your manuscript to a publisher?

I didn’t have an agent for Spotted Tail—I worked with Reycraft Books directly. But, I attended the Association of Writers & Writing Programs conference in 2018 and submitted my application for their Writer to Agent program.

I interviewed with several agents there, and signed with Michelle Brower of Aevitas Creative Management on the spot. Michelle worked with me on my adult manuscript, Winter Counts, and we submitted it to publishers in 2019.

We were fortunate to have a number of Big Five publishers interested in the book, and I accepted a two-book deal with Ecco/HarperCollins. Winter Counts will be released in August, 2020, and it’s already getting some buzz as one of the first Native American thrillers.

Set on the Rosebud Indian Reservation, it’s the story of Virgil Wounded Horse, a hired enforcer, who’s also the guardian of his 14-year-old nephew, Nathan. But when heroin makes its way into the reservation and finds Nathan, his vigilantism suddenly becomes personal. He enlists the help of his ex-girlfriend and sets out to learn where the drugs are coming from, and how to make them stop.

The novel also deals with Virgil’s struggle to come to terms with his Native American identity.

I hope readers will enjoy the book, but I need to caution that it is not for children.

Winter Counts is being marketed as a crime novel, although I think it might be of interest to folks who don’t usually read in that genre. In general, Native writers have not written extensively in the crime fiction genre, although there are some notable exceptions.

But I’ve always felt that crime fiction is a natural fit for American Indian writers, as we are quite familiar with the inequities in the criminal justice system.

An example of this is the Major Crimes Act, a law passed by Congress that limits Native people from prosecuting certain felonies that occur on their own lands. Instead, U.S. federal authorities have the sole authority to prosecute these crimes, but they are declining a large number of these cases, even when the offender has been arrested.

This means that these violent criminals are released from custody and are then free to re-offend. This law is central to the plot of Winter Counts, and is also briefly mentioned in Spotted Tail.

My future writing plans include another middle-grade book, a collection of nonfiction essays on Native American issues, and another novel, the sequel to Winter Counts. I’m tremendously heartened by all the new work that’s being created by Native writers, both in the children’s and adult worlds. And of course, the creation of the Heartdrum imprint is the best news in a long, long time.

I’ve found children’s and young adult authors to be some of the most open and welcoming people, and I’m so grateful that they’ve accepted me and my work.

David Heska Wanbli Weiden, an enrolled member of the Sicangu Lakota Nation, is the author of the children’s book Spotted Tail (Reycraft, 2019) and the novel Winter Counts (Ecco/HarperCollins, forthcoming 2020).

His work appears in Shenandoah, Yellow Medicine Review, Transmotion, the Criminal Class Review, and other magazines.

He’s the recipient of a MacDowell Colony Fellowship, a Ragdale Foundation residency, the PEN America Writing for Justice Fellowship, and was a Tin House Scholar.

He received his MFA from the Institute of American Indian Arts, and is associate professor of Native American studies at Metropolitan State University of Denver.