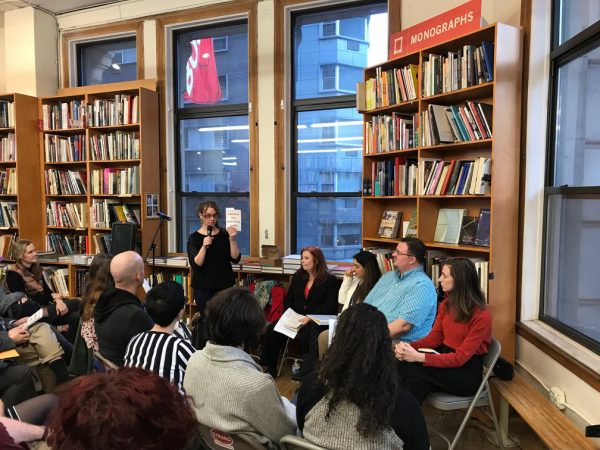 In 2015, I had an idea for an anthology. It would be a collection written by sexual violence survivors for teen readers. 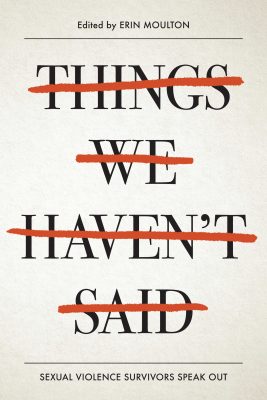 It would be part documentary, part creative content, part informational resource. That anthology was published in March 2018 and was called Things We Haven’t Said: Sexual Violence Survivors Speak Out (Zest Books, 2018).

It came out strong, receiving stars from Booklist and Kirkus Reviews and features in both School Library Journal and Publishers Weekly.

We had 15 book launches over seven states, and we donated $5,000+ dollars to charity and more than 150 copies of the book to local rape crisis centers and advocacy groups. We spoke on NHPR, WOVU and more.

We connected with readers, writers, artists, survivors and advocates and created some awesome partnerships along the way. I’m so proud of how much was accomplished with our combined efforts.

But in 2015 I didn’t know how to write an anthology. I had a seed of an idea and no know-how. So, I got to work. I scoured anthologies I admired, like Dear Bully by Carrie Jones and Megan Kelly Hall (HarperTeen, 2011) and Dear Teen Me edited by E. Kirstin Anderson and Miranda Kenneally (Zest Books, 2012).

I learned a few things along the way and wanted to give you a quick rundown of how to construct your anthology proposal. It all boils down to the 4 Cs: Concept, Contributors, Competition, Content. Let’s break it down.

In your concept overview, you should be able to answer some basic questions: What’s this book about? Why is it important? What do you hope it will do, and how do you plan to do it?

I used my concept overview to explain where the anthology idea had come from (working with teens at the library), what I hoped the anthology might do (make significant connections to readers who have endured similar trauma, give valuable perspective to those outside of the experience, supply facts and information that would open up cultural dialog).

Then I outlined how it was going to do what I intended by introducing my plan for structure. In this way, I’d provided a broad view of what the book would look like from start to finish.

Anthologies aren’t anthologies without contributors. When considering contributors, you’ll want to figure out who they are and where you’ll find them. Will they be all YA authors? A combination of authors and illustrators? Or does your work pull voices from far afield? Do you have a full list, partial list? And what networks will you reach out to find more?

I knew I wanted a variety of voices from all walks of life. I knew I couldn’t get that if I only asked YA authors to contribute. Instead, I reached out to rape victim advocacy groups, and asked them to spread news that I was looking for contributors.

I was thrilled when the RAINN (Rape and Incest National Network) Speakers Bureau sent out my call and when the Voices and Faces Project drummed up several writer advocates.

I also did reach into the YA lit community and received some amazing stories and poems.

I made a list of all those who had responded and my dream list. We needed to make an extra push for diverse voices and male voices, so I included networks such as We Need Diverse Books and MaleSurvivor as potential people who might be willing to send out the call (And they did!).

Consider what will make your anthology standout. What other books have already been published on the same topic? What is the competition like? And how is your book different?

I found many YA novels that focused on rape and sexual assault, but far less nonfiction titles were aimed at my target age group.

Within the nonfiction field, titles were specific to a certain set of survivors (incest survivors vs. sexual assault survivors) but still primarily for adults.

There were also books for adults that delved into sexual violence on college campus and beyond. Not as many focused on children and adolescents or were aimed at that age group.

Obviously, it’s a difficult subject to discuss, let alone discuss with teens, so the second part of this component touched on why the book was vital for teen readers, why teens need access to information and how this book does that better than others (through anecdotal stories, interviews and resources).

I also highlighted that this book is written by survivors of juvenile sexual violence, which gives it a leg up on being able to speak candidly with the intended audience.

Just as with fiction, publishers want to get a sense of feel, voice and story. Can you find a few early writers willing to give you sample content? What scope of subject and voice would you like those examples to reflect?

I reached out to writers that I admire who had talked about this subject on their platforms in the past. They believed in the project and wrote me pieces early so that I could include them in the proposal.

The book never would have sold without the thoughtful, intense essays of Carrie Jones and Melissa Marr. They were also willing to do the question and answer component, so the publisher could get a feel for the content side-by-side.

I included statistics in these sample pages as well, which gave an extra emphasis on my ability to research and pull from resources on the subject matter.

Our proposal went out in late 2015 and by early 2016 we had a contract. It’s been a challenging but fruitful project for me, and I feel lucky to have spent the time on it and connected with the people who trusted me with their stories.

I wouldn’t have gotten there without that initial legwork on the proposal that helped encapsulate the vision.

Her books have been selected and nominated for national and state award lists, such as the AL Amelia Bloomer List, the Kentucky Bluegrass Master List and the Isinglass Teen Read Award List. Flutter was also a 2011 Kid’s Indie Next pick. 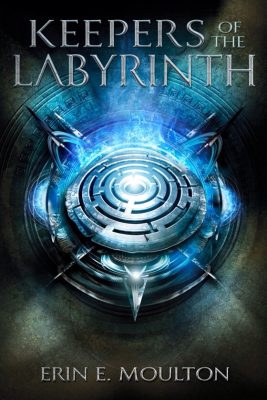 When Erin isn’t writing books she can be found drinking an excessive amount of Barry’s Tea, scribbling in notebooks, carving pumpkins, staring off into space wearing her noise cancelling headphones and trying to stay out of mischief without always succeeding.

She also works as teen librarian at the Derry Public Library where she maintains a collection of awesome YA books and leads teen programming.

Erin loves fostering new voices, which makes her an active school visitor, mentor and workshop leader to writers of all ages.

She is a proud Vermont College of Fine Arts alum, as well as a teen advocate, a humanist, a feminist, and a would-be philanthropist if she could find any extra dollars.