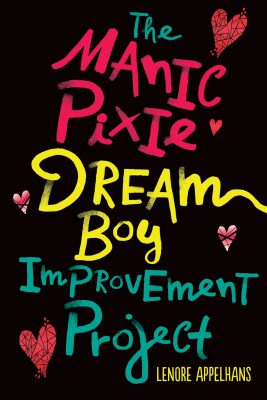 Putting together a fabulous book launch is tricky for any author. But what if the author has a family tragedy just a few weeks before their book comes out?

At the beginning of the year, Lenore Appelhans, author of the delightfully clever YA novel The Manic Pixie Dream Boy Improvement Project (Carolrhoda Lab), was excited about her upcoming March 2019 book launch.

Then in January 2019 Lenore’s husband Michael Eisenhour died suddenly and unexpectedly. He was just 41 years old.

Grieving for Michael, Lenore had no motivation to plan a party for a book that she and her husband had looked forward to promoting together.

Lenore’s many friends were heartbroken for her and wanted to help. Angele McQuade, Mary G. Thompson, Kristen Lippert-Martin and Madelyn Rosenberg rose to the challenge and planned a book launch party for Lenore’s novel.

Their efforts are great examples of how to be a supportive writing friend and how to pull off a book launch party as well as a low-key social media promotion.

1) Coordinate with the Book’s Publicist to Create a Social Media Graphic for a Pre-Order Campaign.

Madelyn contacted the publicist at Carolrhoda Lab to say that Lenore’s friends were willing to pitch in. The publicist created a graphic for the novel, which Madelyn used in constructing sample tweets and other social media posts. She then emailed these to Lenore’s many friends.

When creating a book launch party, identify a willing bookstore with an experienced staff.

Angele chose One More Page Books, an indie bookstore in Arlington/Falls Church, Virginia. She knew its team would be willing to support a local YA author.

(They are the special group of ladies who organize and sponsor the NoVA Teen Bookfest every year.)

3) Create Activities to Fit the Tone of the Book.

The four friends then had to pull off the trickiest part: what to do at the book launch. They didn’t want to spoil this entertaining, meta novel by saying too much.

So they needed to (a) have a flexible plan with activities that they could offer, with or without Lenore, and (b) be able make easy changes on the spot, depending on how she was feeling.

The final concern of the four friends was that only two of them could attend the book launch.

Sadly, Angele lost her father and needed to be with her own family for his memorial, and Madelyn had a family trip that weekend.

Ideas for Your Next Book Launch 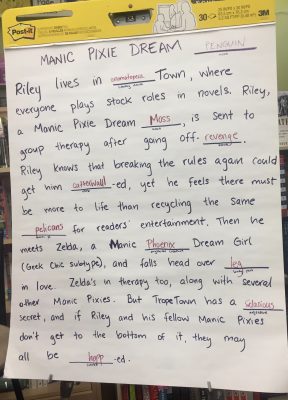 One More Page manager and book buyer Lelia Nebeker created a Mad Libs game using the premise of Lenore’s book. The Mad Libs activity was playful and clever, fitting perfectly with tone of the novel. The audience–full of writers—had no problem coming up with their own clever nouns, verbs, and body parts to go in the Mad Libs, and reading the final product gave the audience a good feel for Lenore’s novel.

Since much of the book takes place in a group therapy session for Manic Pixie Dream Girls and Boys (who are all characters in various YA novels), the reader’s theater approach was a good fit for the party.

The friends let Lenore choose if she wanted to play her main character, Riley, or not. At the event, Lenore did play Riley. Mary and Kristen played the other manic pixie dream girls, along with Lenore’s friend Ann Bonwill and bookseller Amanda Quain, who wowed the crowd with her portrayal of the fifth manic pixie.

For the last segment of the book launch, Mary and Kristen wrote questions about character tropes and the writing process. This plan worked well because the two friends could (a) both ask Lenore questions, or (b) if Lenore didn’t feel up to answering, one of them could step in to answer instead.

Lenore was able to answer and what followed was a smart, engaging discussion on how she first came up with the idea for the story while earning her MFA at the Vermont College of Fine Arts after reading the YA novel Looking for Alaska by John Green (Dutton, 2005). Lenore also discussed how she dealt with tricky issues that came up when writing about tropes.

To end the festivities, Mary had baked cupcakes and Madelyn had sent pixie sticks, which were served while Lenore signed books for her many friends and fans.

Lenore Appelhans is the author of novels and picture books. Her most recent novel is The Manic Pixie Dream Boy Improvement Project (Carolrhoda, 2019). She holds an MFA in Writing for Children and Young Adults from Vermont College of Fine Arts.

Ann Bonwill is the author of many picture books, including I Am NOT a Copycat (Atheneum, 2013).

Kristen Lippert-Martin is the author of the YA thriller Tabula Rasa and its sequel Incognita (Carolrhoda, 2016) 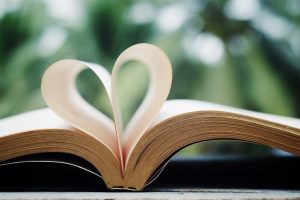 Angele McQuade writes novels for children and young adults, as well as books for grownups on investing. She is represented by Jennifer Laughran of the Andrea Brown Literary Agency.

Madelyn Rosenberg writes stories for children and adults, as well as essays, articles, and newsletters. Her most recent picture book is Take Care (Albert Whitman, 2018)

Mary G. Thompson is the author of middle grade and young novels. Her most recent novel is Flicker and Mist (Clarion, 2017).

Robin Galbraith holds an M.F.A. in Writing for Children and Young Adults from the Vermont College of Fine Arts. She’s been working with Cynthia Leitich Smith as a Cynsations intern since October 2017. Halloween is Robin’s favorite holiday because she gets to dress up like a witch and give out books for her Halloween Book Project.