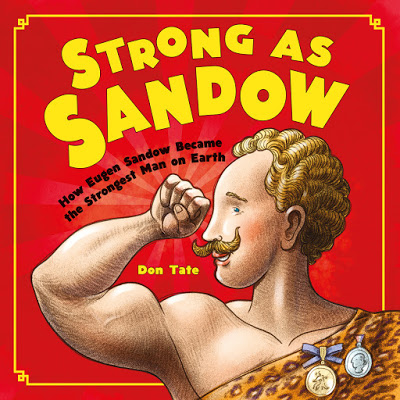 To welcome “Sandow” into the world and to provide my new book babe with tools needed to flourish, I planned a full marketing blitz.

Marketing a new book is a shared effort between a book’s creators and its publisher. My publisher supported our book in many ways. For instance, they sent me to various conferences to promote and sign “Sandow.” But I want to be sure I do my part, too.

Here is a look at how I launched Strong As Sandow into the world:

Sources for telling Sandow’s story were like a gold mine of visual gems.

There were books, photographs, collectible items, old-time physical culture magazines. Unlike previous subjects I’d written about—Bill Traylor, George Moses Horton, people who were enslaved and therefore few records and/or photographs available— there was a good deal of visual information out there on Eugen Sandow.

In the end, however, much of the research got chopped out, left on the cutting board. With a stand-alone website, I could include some of those resources that didn’t make the book. What a great tool for teachers and librarians.

Friend Erik Niells of Square Bear Studio, created the site using WordPress. Basically, he created a shell of a site that I could easily personalize and update. Adding new information is as simple as creating a new blog post. 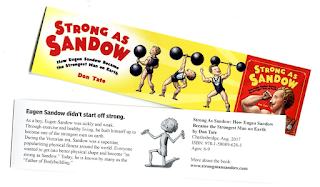 On the site, I celebrate receiving author copies of Strong As Sandow. I talk about other picture books on the topic of strongmen . I discuss the process of creating the book’s cover. And I include many of the photos and videos that I used to bring the story to life.

The site is linked from my main website, and I advertise it on my bookmark swag.

My publisher had a very nice discussion guide created as a free download. It is aligned to the Common Core, nationwide academic standards used in classrooms. Having a Common Core-aligned guide adds value to your book.

I loved the guide, but I also hired Debbie Gonzales of  Guides by Debbie to create a second educator’s guide. It is Common Core aligned, too, but also incorporates a lot of what I’ve offered on the stand-alone site—making the site and the guide an extra nice pairing with the book.

My favorite part of Debbie’s guide is the fitness plan, where kids can log their weekly exercise goals and accomplishments. We made the guide available on Sandow’s launch day and promoted it heavily.

By far, the fitness video was the most fun aspect of my Sandow marketing efforts. I’d already created a short teaser for the book using iMovie. For that video, I used the original art, panning and zooming, in what is called the “Ken Burns effect.” For drama, I used royalty free music found on the web. And I recruited my friend, Maggie Gallant, to record a voiceover.

We released the the teaser several months ahead of publication day to create anticipation.

The trailer turned out nice, but I also wanted a longer video where I could go deeper into Sandow’s story, emphasize the importance of exercise, while highlighting my own fitness journey—especially since I participated in natural bodybuilding myself many years ago!

For this, I commissioned Kirsten Cappy of Curious City. She and her husband, Mark Mattos, flew to Austin where I live. They spent an entire day interviewing and videotaping me at my local YMCA, while I exercised in the weight room, swam laps in the pool, and practiced yoga.

Needless to say, I was all nerves. It’s one thing to work out in busy weight room. It’s another thing to work out with a cameraman following me around, with a huge microphone, an interviewer, and the director of the YMCA.

We caused such a stir that some teenagers tried to sneak into our filming, thinking we were shooting some kind of celebrity reality TV show. (Watch until the end; don’t miss the after-credits scene!)

We debuted our “Nothing In Moderation” physical fitness video along with an interview at “Watch. Connect. Read.” a blog hosted by John Schumacher (AKA Mr. Schu).

The video has been uploaded to YouTube and TeacherTube, and will sit on the internet indefinitely, serving two purposes. For one, it will continue to promote my book well into the future. Two, it will support future author visits, offering students a glimpse into the life of the author-illustrator who will visit their school.

At a recent visit, many students had watched the video, and they had all sorts of questions about Strong As Sandow, physical fitness, and—how much could I bench press!

Check out the site, but don’t forget to see the bloopers and outtakes! 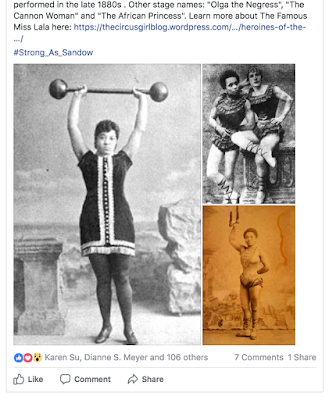 On the week leading up to book release day, I posted interesting and inspirational tidbits of information about historic, little-known physical fitness figures, like Professor K.V. Iyer and Mlle LeZetora —bodybuilders, weightlifters, strongwomen, with the hashtag #Strong_As_Sandow.

I also had a drawing where I gave away copies of of the book to those who shared my social media posts.

The idea was that while people may not remember the name of my book, they might remember that Don Tate has a new book out on the subject of a bodybuilder, health, fitness.

During the year leading up to my book’s release, I’d made arrangements to have a launch party at the Stark Center for Physical Culture and Sports in Austin.

It features classical statues and paintings of Greek and Roman athletes. It also features the Joe and Betty Weider Museum of Physical Culture. The Stark Center has what is probably the largest collection of Eugen Sandow artifacts in the country. This research and sports museum was the perfect place to launch a book like Sandow.

But there were hurdles. Many hurdles. And a hurricane.

The Stark Center is on the campus of the University of Texas—it’s a huge bureaucracy! There were parking issues. There were book-selling restrictions. Since the book would publish during football season, there were more challenges.

Thankfully, the librarian there came to my rescue. She jumped all the hurdles—even kicking some down. She made sure the event could happen  . . well, except that two days before my launch party, the “hurricane of Biblical proportions” caused me to have to cancel.

Two weeks later at BookPeople, though, we launched Strong As Sandow with a cake, topped with “The Sandow” statuette. We partied with raw food and health guru (and strongman) Andrew Perlot. We gave out healthy treats and played games designed to get the kiddos moving their bodies.

While the party was meant to celebrate the birth of my new book, it also served as promotion and book buzz. I had a lot of photos taken, which were captioned and sent to “Publishers Weekly”—who then publicized my party in their “In-Brief” section.

On her blog, Debbie Gonzales described me as a “master marketer.”

I’m not. I just do my best to support my book babes.

School Library Journal gave Strong as Sandow a starred review, calling it “An excellent introduction to a historical figure that will appeal not only to children already interested in sports and fitness but also to those in need of encouragement.” 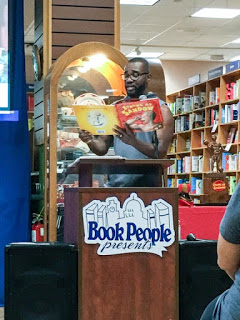 He is also an award-winning illustrator of numerous critically acclaimed books for children, including Whoosh! Lonnie Johnson’s Super-Soaking Stream of Inventions by Chris Barton (Charlesbridge, 2016) The Amazing Age of John Roy Lynch by Chris Barton (Eerdmans, 2015); The Cart That Carried Martin by Eve Bunting (Charlesbridge, 2013); Hope’s Gift by Kelly Starling Lyons (Penguin, 2012), many others.

Don is a founding host of the The Brown Bookshelf –a blog dedicated to books for African American young readers; and a member of the #WeNeedDiverseBooks campaign, created to address the lack of diverse, non-majority narratives in children’s literature.

He lives in Austin, Texas, with his family.