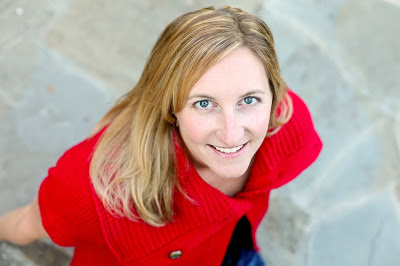 Welcome to Cynsations! What was your initial inspiration for writing Calling All Cars (Sourcebooks, 2016)?

I wrote this book for my first son, Owen, who was obsessed (and that’s putting it mildly) with his Matchbox cars. He had about 75 of them, and by age 3, had given them all individual names.

We used to play a game where he’d close his eyes, and I would hand him one of the cars. He would feel it, and then tell me which of his cars it was. He never missed. He sometimes slept with them in his crib (I know, choking hazard! Once he was asleep, I removed them, okay?)

He even carried them everywhere he went. Once at the park, he buried one in the sand and then couldn’t find it. Not our finest hour. 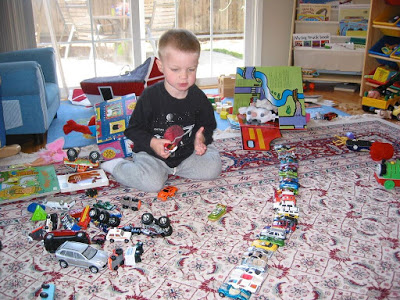 As you know, there is a lot of rejection in this business. Well, considering my car-obsessed son will be 13(!) next week, I would say from spark to publication was about 10 years, give or take a year.

The only timing that could have been better for answering this question would be if he was now 16 and learning to drive.

A lot happens in 10 years. I actually thought Calling All Cars was going to be my first sale, but the editor who was championing it left before the editorial meeting.

I sold several more books and most of them even published before I sold this one.

Events…those Matchbox cars were soon shared with Owen’s baby brother, Wyatt. My children learned to use the potty. They learned to read. I gained and lost a lot of baby weight. I became an Aunt. We moved from an Audi to a Subaru to a minivan to an SUV. I could go on.

What were the challenges—research, emotional, logistical—in bringing the cars to life? 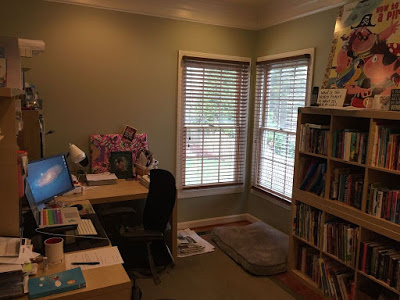 Not too long after I started sending this manuscript out, Pixar came out with a little movie about cars—you may remember it—and I thought my story would never make it.

I mean, how could I compete with Lightning McQueen?

So I shelved it for a good bit of time. When I landed my agent in 2009, and sent her everything—good or bad—I’d written (my apologies to her for that!), and this was in the mix. She believed in it, and I’m thrilled that it found a home—and such a good one at that with Sourcebooks. The editor and illustrator nailed it!

What did Sarah Beise‘s illustrations offer to the text?

I think Sarah did a tremendous job of giving the cars different personalities through their drivers. I was a little worried that an illustrator might animate the cars and they would smack of that Pixar film I mentioned…but because she has animals driving the cars, we avoided that issue entirely.

And with any picture book, the illustrations go well beyond what the text is saying. There are penguins snorkeling and surfing in the background, hidden children’s toys, pigs in the wide car, a turtle in the slow car, lions in the King and Queen car, bugs in the Bug, and all sorts of other clever nuances….and best of all, if you line up every page horizontally, the road connects from start to finish.

My editor and I met and discussed the different options: animating the cars themselves, having people drive them (kids or adults), or animals. I was up for anything—and while people are fun, animals are just so much better. As a pet owner, I’m a bit biased.

I was really happy with the direction, and Sarah’s animals are cute and full of personality. It was the best outcome.

This publishing ride has been an amazing one for me. I can remember in my pre-published days, visiting this great blog called Cynsations where I could get a sneak peek at all of the editors whom I was trying so hard to reach, on ‘the other side.’ And now, here I am, on the blog!

I’m honored. Thanks for having me. 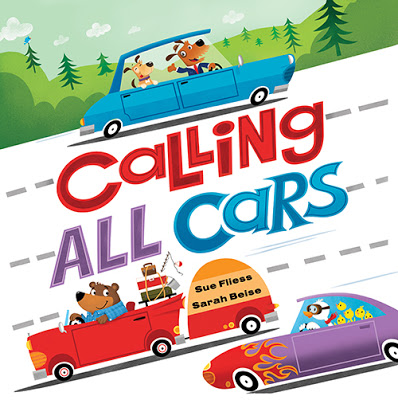 Big cars, small cars, let’s call ALL cars! This bouncy text explores the wonderful world of cars zipping up, down, fast, and slow. A perfect basic concept books for eager young learners from the author of Tons of Trucks. Then cruise into bedtime!

Filled with vibrant art, adorable animal characters, and cars of all kinds from love bugs to the demolition derby, Calling All Cars is for every child who loves to read about things that go! Surprise bonus—follow one long road throughout this vividly imagined world and don’t miss the hidden clues in the artwork!