Marian Schwartz is a master translator of Russian literature into English. Active in PEN and past president of the American Literary Translators Association, she has translated more than seventy books including the bestseller The Last Tsar by Edvard Radzinsky and a re-translation of Anna Karenina by Leo Tolstoy.

Recently she has added to her oeuvre the YA novel Playing a Part by Daria Wilke, edited by Emily Clement and published by Arthur A. Levine Books/Scholastic. Clement discovered the title by reading an article in The Atlantic, which has since been expanded upon by Publishing Perspectives.

Schwartz emailed with me for Cynsations from her home office in Austin, Texas.

Thank you for accepting this interview. How did you develop and cultivate your love of Russian?

First, I fell for the literature. In high school in the 1960s I studied Chekhov’s play “The Seagull,” which has remained one of my favorites, and was also obsessed with the dark side of human nature, always drawn to books about concentration camps, for instance.

But I was also a budding linguist, and once I started Russian at Harvard, I was already farther gone than even I knew.

What led to becoming such a prolific literary translator?

After graduate school I worked in publishing in New York. During those two years in house I learned how to copyedit and translated and published my first book. By then it was clear that I would not fare well in an office environment, so I went freelance, paying the bills by copyediting in the beginning. It’s much easier to be as prolific as I’ve been if you spend the entire day translating.

Playing a Part unfolds in a Moscow “combined theater,” which features both traditional puppetry and a company of actors. The main character, Grisha, has grown up here, and to him the theater is nearly a person—one who blinks, squints, smells, sighs, and even laughs. It was wonderful to meet this theater through your translation! 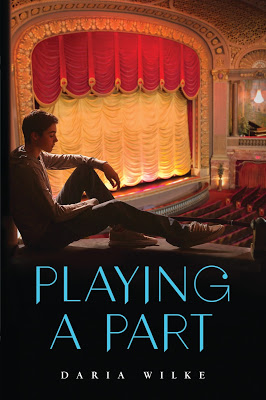 This novel spotlights traditional puppets, especially the Jester in a version of Cinderella. Is the lexicon of puppets embedded in everyday Russian, or did you have to learn from scratch about gesso and leg yokes, ruches and chiton, controllers and crossbars?

I knew nothing about the technical aspect of puppets when I began this project, but that’s one of the perks of being a translator: the research required to make a translation correct and complete. It’s easy to get (happily) lost learning about a new field. I read books about puppetmaking and consulted with puppeteers. I did extensive Internet image searches. There are books that require no research at all, but they’re very rare.

How did you find it rendering this novel in present tense, with jumps in voice between the first and second person? (“My heart thuds to my feet, which are suddenly heavy and weak. You want to go somewhere, but can’t.”) Is this common in Russian storytelling?

The “you want to” construction is one way English renders impersonal constructions. An alternative would be to say, “one wants to”—but that would give the text the wrong tone in this case. Russian narratives treat tenses quite differently than English-languages stories do, so tense is an important question to be decided for each text. In this case, I wanted the immediacy of the present tense for the basic story line and used the past tense for events recounted that occurred prior to the main action.

Russian has an extensive system of nicknaming that has to be conveyed differently in English. The English reader doesn’t know what the difference is between “Sasha” and “Sashenka,” for example. Both are nicknames, and a Russian reader knows that “Sashenka” is more pointedly affectionate, but if it’s translated that way, the English reader loses that information. To render this nuance, the translator needs to modify “Sasha”—“dear Sasha,” “my Sasha”—or demonstrate the implied affection in some other way. The possibilities are limitless.

So the emotions associated with nicknames can and should be conveyed to the English-language reader without introducing the confusion wrought by having multiple names for the same character.

How would you describe your process of translating this book?

My translating process is essentially the same, no matter what I’m translating and involves four stages: the “inspirational” stage, when I write down every idea that pops into my mind; a cross-check, when I make sure I’ve understood and rendered everything “correctly,” compile my queries, and find answers to them; a third stage, when I set the Russian aside and focus on the English; and a fourth stage, when I ask someone to read the translation to me out loud while I follow along with the original. For some books, that means a total of four passes, but some books require more than one pass at each stage.

The character Grisha in Playing a Part is probably gay, and he admires the actor Sam who is gay—and emigrating to Holland, due to lack of acceptance. Grisha’s grandfather voices this lack of acceptance, calling homosexuality a misguided choice, “popular with you theater people.” The grandfather’s rejection of gays, actors, and even a tomboy teen girl named Sasha is so complete as to sometimes seem absurd. Did he prove tricky to render?

Unfortunately, his attitude is all too common in Russia. I’ve had ample opportunity to contemplate this worldview.

I love a scene in the novel where Grisha and Sasha take handstand lessons, acting like children again—“Like when you just lived without thinking whether you were one way or another.” Did you find this to be a central scene as well?

I agree. This scene was a delight, and I particularly recall it rolling it off my keys and onto the screen. There was something true and transcendent about that moment in time that came out directly in English.

I understand that this book has been restricted to adult sections of bookstores in Russia, though to me it reads like a book for tweens. Do you know how the response has been among Russian-language readers?

I asked Wilke the same question, and she wrote: “While we were preparing to publish, I made friends with the children from Children-404 (an Internet project for homosexual teenagers that helps children who have become aware of their own homosexuality with consultations, advice, and so forth. The police have brought charges against the project many times and they’ve been taken to court to be shut down, but so far, thank goodness, none of this has come to pass), and they made the book the talisman of their movement. Later, they arranged a philanthropic action, buying up copies and sending them to children in outlying regions who needed the book but had no opportunity to buy it.”

What can you tell us about the author, Daria Wilke? Did you and she collaborate?

Wilke was very generous about answering my questions and clarifying various points, but she and I have never met. I was approached to translate the book by the publisher.

You have spoken up about rights for translators, supporting the PEN America model contract for literary translators, for example. Can you give us some background on translator rights, and explain how translators can provide more access to world literature?

Translator rights are based on the notion that the translation is written by the translator, not the author or publisher, and, therefore, the translator has a moral claim on the copyright to that English-language work.

Translators themselves are only able to provide more access to literature for works that are in the public domain, because translation rights are secondary to the overarching right to publish a work in a given language. So, for example, if Playing a Part were in the public domain—which it most emphatically isn’t!—I could seek a publisher for my translation and help get it distributed to more children. In practice, this is a rare situation.

In a way, your work reminds me of Grisha’s quiet choice to be himself in Playing a Part. “In life, as onstage, if you do nothing, then nothing happens.” What are some “somethings” you recommend translators do to increase the amount of world literature available in English?

Translators have two approaches available to them. First, they can choose books that are more likely to resonate with English-language readers and then translate them very very well. Second, they can draw attention to their own and others’ translations by writing reviews, for example, or giving interviews, keeping a blog, participating in readings and other literary events, doing outreach to schools—pretty much the same avenues for publicity open to all writers.

Translators tend to be introspective and can be shy of social media and what they see as self-promotion in general. My solution to this temperamental dilemma is to conceive of the effort as an act in support of the author and the book.

Do you plan to translate any more titles for teen, tween, or younger readers?

I already have (when I have the details you’ll be the first to know!) and am now considering yet another. Both books were written for the tween reader, much the same audience as for Playing a Part.

Marian Schwartz maintains a website and contributes to Words Without Borders and Subtropics, among many other publications.