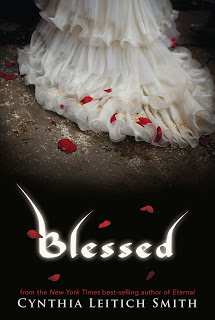 Looking for this week’s round-up of the most useful and inspiring links in the kidlitosphere? It’s at Cynsational News & Giveaways–packed with awesome info and the most giveaways ever!

After a summer of reading, teens are now invited to vote for YALSA’s Teens Top Ten List!

I’m that my novel Blessed (Candlewick, 2011) is among the 25 titles nominated for YALSA’s Teens’ Top Ten!

From YALSA: “Teens’ Top Ten is a ‘teen choice’ list, where teens nominate and choose their favorite books of the previous year!

“Nominators are members of teen book groups in sixteen school and public libraries around the country. Nominations are posted on Support Teen Literature Day during National Library Week, and teens across the country vote on their favorite titles each year.

“Readers ages twelve to eighteen will vote online between Aug. 22 and Sept. 16; the winners will be announced during Teen Read Week.”