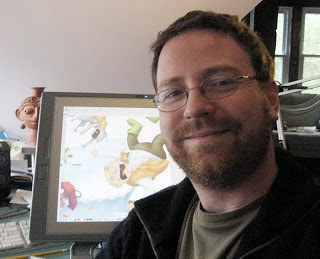 Could you tell us a little about yourself?

I grew up in Cleveland and worked at American Greetings for a few years after college. My job was writing and drawing the funny cards, until a visit from the Downsizing Fairy in 2002.

Thankfully, I had already begun illustrating children’s books, and the transition to working from home was easy, despite now having to provide my own tech support and empty my own wastebasket. For the last nine years, I’ve holed up in my attic studio writing and drawing fun things, and I haven’t had to go to a single meeting.

Thanks for the terrific job you did on the illustrations to Holler Loudly! How did you come to connect with the project?

Oh, the usual, I got an email from my agent with this great offer to illustrate a book.

As soon as I read it, I knew I was in! I thought it was going to be the most fun illustrating a book I’ve ever had, and I was right.

What approach did you decide to take initially to illustrating Holler’s story?

I used to do rough sketches on paper, but this was one of the first books I sketched out completely on the computer. I wanted the freedom to experiment as I went along–to move things around, squish and stretch things, make parts bigger and smaller, switch back and forth between ideas to compare them, and so on.

Did you do any research?

I looked at a lot of old 1930’s photos online, of small western main streets and homesteads, and clothing. It only occurred to me much later that there was nothing in the story that required that it be set in the past, that’s just what I immediately pictured when I read the manuscript for the first time.

How did you develop the characters? 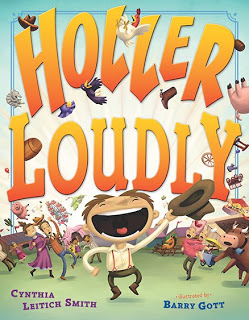 I worked the most on Holler himself, lots of sketches of mouths. It was tricky getting his yelling mouth to not cover his whole face, yet still be exaggerated and larger than life. His parents are just how I pictured them from the outset.

My favorite little detail was giving them a little gray hair between when Holler was born and when the story takes place. Parenting a Loudly baby would certainly take its toll.

I love what you did with the sassy tornado! How did it come into focus?

When I first sketched the tornado I just scribbled wildly, then used the eraser to shape it and draw its face. It was originally intended to just be a quick rough, but I loved the looseness and wildness of it, and knew I wanted the same in the finished art. I used the same technique in the finished art, with lots of colors and layers, playing around with the opacity until I liked it.

Could you tell us about the process of adding layers through the art?

When I create art on the computer, I take layers to absurd lengths. Every face, eye, neck, shirt, arm, hand, pants, etc. is on its own layer. Hundreds and hundreds of layers. It enables me to paint fast within each shape, and change things around in the finished art if I need to, but it also creates huge files which sometimes choke my poor old computer.

What was your revision process?

Looking back, what about the process stands out most in your memory?

Getting more and more excited as the details of the finished paintings started coming together and lining up wonderfully with what I had seen in my mind. That doesn’t always happen. 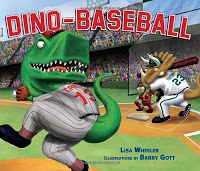 Dinosaurs. Lots of ’em. The series of Dino-Sports books written by Lisa Wheeler continued in spring with Dino-Baseball (Carolrhoda, 2010), and I recently finished the next title, Dino-Basketball. I’m enjoying a little break before diving into Dino-Football.

I should have sneaked a dinosaur into Holler Loudly just to keep the trend alive.