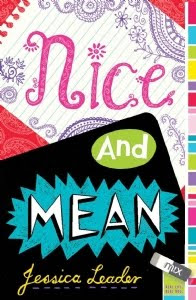 Jessica Leader is the first time author of Nice and Mean (Aladdin MIX, 2010). From the promotional copy:

Nice and Mean by Jessica Leader is a hilarious story about two girls–one nice, one mean–facing off in their middle school video elective.

I’m a plotter. A definite devotee of outlines. It started several years ago when an editor said to me, “60,000 words? That’s way, way too long for middle-grade. Do you outline?”

I admit that the comment made me huffy at first, but when I went back and outlined what I had written, I saw the redundant scenes immediately and hacked my way to a much stronger draft.

In future projects, starting with an outline has allowed me to spot problems in advance, like dropped characters or unclear motivations. They’ve clarified my goals and my characters’, too.

This is not to say that outlining produces fully workable drafts in one go. (Are you reading this, Agent E? Are you saying, “Yup?”)

In addition, there’s not always a clear order of operations. Sometimes I can only create partial outlines before drafting, and often, I halt the drafting to re-jigger the outline I’ve made.

But in general, the time I spend outlining is time saved on dead-end drafts. I may have to create a Facebook Fan Page for Outlining.

I have always been in touch with my rebellious kid’s voice, and in my early days of teaching, rebellious kids made a quick showing on my radar.

What I was surprised to find, though, was a huge swath of kids who were actively concerned with being loved and being good people.

An athletic golden boy wrote all year about how he wanted his older sister to be nicer to him and how he wanted more time with his mom. An effervescent, well-liked girl went far out of her way to draw a seriously awkward one into the crowd.

I just hadn’t remembered noticing it when I was growing up, so I was surprised to see it expressed so openly by my students. Sure, they could be cruel, careless, and have crappy attitudes; I was not blind to that. But it coexisted with the goodness, which inspired me as a person and broadened the range of characters I considered myself able to inhabit.

Last spring, I was a little nervous about self-promotion. The audience of readers, bloggers, teachers and librarians seemed so vast and uncatalogued; I didn’t know where to start reaching them.

Varian Johnson–friend of yours, mine, and writers everywhere–gave me great advice: You only have to do two things: create a website and finish your next book. You could make other efforts, sure, but you should stick to things you feel enthusiastic about. If you try to pursue things that don’t feel right, it will show and possibly backfire.

It was all so true. I could spend all my free time promoting Nice and Mean, but it wouldn’t satisfy me the way writing does, and what would I do after the book came out? Promote the e-book?

The advice to pursue what excited me led me to some really fantastic resources and one major coup. I didn’t feel enthused about trying to rope in Twitter followers or give away trinkets. Some people have success with that, but it didn’t feel like me.

However, I love finding thought-provoking kidlit blogs, and I love online dialogue that’s focused around a particular topic. So I decided to go for it with MotherReader’s Comment Challenge, in which bloggers commit to making five comments on various blogs every day for a month.

I didn’t meet that goal by any stretch of the imagination, but I did find some great sites, including Reading in Color, which reviews YA books by people of color. How does blogger Ari know about all these titles? How does a high-school student have the moxie to lead a campaign against the publishing industry for white-washing their covers? I didn’t know, but I commented with fervor, and though it wasn’t my goal at all, my enthusiasm for the blog led Ari to Nice and Mean. She was excited to learn about it, and she became one of the people to host my blog tour.

Another thing I found I enjoyed were the Tuesday night kidlit talks on Twitter. Those led me to a teacher, Paul Hankins, who happens to live near me and invited me to do my first school visit. He mentioned me to his friend Andy Terrell, the owner of Destinations Booksellers, who invited me to do a reading, and when he read my ARC, he nominated me to the Summer 2010 IndieNext List. (Thank you, Paul! Thank you, Andy!)

Is this one-in-a-million story? Maybe. Would it have happened if, instead of drafting my work-in-progress, I’d sent postcards to every indie bookseller in the country? Perhaps.

Will I need to reexamine my promotional approach in a year? I’m sure.

But the difference for me was that instead of grumbling through these tasks, I felt like me and enjoyed myself. I can’t imagine those feelings are anything less than crucial in sustaining a life as a writer.

From Jessica’s website: “Jessica Leader grew up in New York City. Like her characters, Marina and Sachi, she had many important conversations in the stairwells of her school and on the cross-town bus. In addition to being a writer, she has taught English and drama in New York and in Louisville, Kentucky. Jessica graduated from Brown University and has an MFA from the Vermont College of Fine Arts in Writing for Children and Young Adults.”