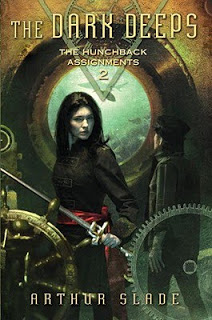 I wrote a steampunk novel. I didn’t mean to, but I did. What I first wanted to do was write a “Jules Vernian/Charles Dickensian/H.G. Wellsian Adventure” that drew from the classics of Victorian literature.

Turns out I was writing steampunk. It’s a lot easier to say, and it makes the book sound cooler. What is steampunk, you ask?

Hey, it’s science fiction inspired by the aesthetics and atmosphere of the Victorian era.

My series is called The Hunchback Assignments (Wendy Lamb, 2009-) and is the story of a shape-changing hunchback who becomes a special agent for the British Empire (in fact, the sequel, The Dark Deeps (Wendy Lamb, 2010) is out this week and this post on Cynsations is the second day of my blog tour).

In the books, there are villains with steam-powered limbs, airships, electric submarines, special gadgets and enough cockney to warm the cockles of your heart.

Along the way, I learned a few “rules” about steampunk.

Here are two of them that will punkify your writing.

1. Get to know Queen Victoria.

Not so much the queen herself (though she was fascinating; did you know she was buried with plaster-cast hands of her dead husband and her favorite relatives?).

No, I mean, get to know the era. What did people wear? What were the politics of the time? Was there really such a thing as a spring-loaded top hat (yes, it would collapse down so you could hide it under your opera seat)?

All of this information can be the springboard for your amazing imagination.

2. Use the steam-powered Internet to your advantage. 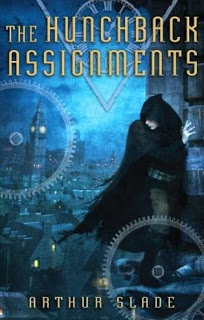 Want to know what a double-barreled, Victorian-era elephant gun looks like? Just look it up on eBay. Buy one if you really want to see. Most anything you can imagine is on sale somewhere on the Internet.

Also, Googlebooks is an amazing asset. You can find books about steam-powered tractors or the Roman Empire, all written pre-1874, so you know what people thought about those topics back then.

Or do you want to find that perfect slang word but aren’t sure where to look? Try the Slang Dictionary. It was written in 1874, is searchable, and you’ll find all sorts of lovely descriptions of the way people really used to talk. Did you know that a Bone-Grubber is someone who hunts for bones to sell at the rag-shops? Look it up in the aforementioned dictionary.

And don’t forget Google Earth: I recently had a scene where my characters are traveling by airship across Australia at about 4,000 feet. To get a feel for what that would look like, I went to Google Earth, zoomed to Australia, set the altitude at 4,000 feet and used that view as my inspiration for describing the land below.

There, now you know how to write steampunk. Isn’t it easy?

You could be penning the next Leviathan by Scott Westerfeld (Simon Pulse, 2009) or Airborn by Kenneth Oppel (HarperCollins, 2004). Zounds! Snap to! But I do have one more piece of advice. Forget all the claptrap and drivel that I’ve told you.

Well, use what helps you. Because steampunk, like all fiction, is creative, malleable and always changing. Just put on your goggles and strap into your airship and fly.

Enter to Win a Copy of The Dark Deeps! Random House is offering four copies. To enter, just email me (scroll and click envelope) and type “Hunchback” in the subject line. Facebook, JacketFlap, MySpace, and Twitter readers are welcome to privately message me with the title in the header or comment on this post. Deadline: midnight CST, Sept. 21. U.S. entries only.