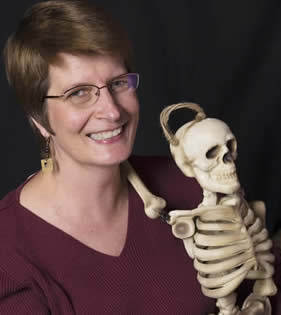 Jacqueline Houtman is the first-time author of The Reinvention of Edison Thomas (Front Street, 2010). From the promotional copy:

Science geek Eddy Thomas can invent useful devices to do anything, except solve his bully problem.

Eddy Thomas can read a college physics book, but he can’t read the emotions on the faces of his classmates at Drayton Middle School.

He can spend hours tinkering with an invention, but he can’t stand more than a few minutes in a noisy crowd, like the crowd at the science fair, which Eddy fails to win.

When the local school crossing guard is laid off, Eddy is haunted by thoughts of the potentially disastrous consequences and invents a traffic-calming device, using parts he has scavenged from discarded machines. Eddy also discovers new friends, who appreciate his abilities and respect his unique view of the world.

By trusting his real friends, Eddy uses his talents to help others and rethinks his purely mechanical definition of success.

One of the first—and most important—decisions I made was to write the book in the third person. I never really considered first person, which would make Eddy more self-aware and eloquent than I wanted him to be.

It was also important that the narration be strictly from Eddy’s point of view. Even without a first person narration, I wanted the reader to know what was going on in Eddy’s head, to understand why he did things that would seem very weird to an outsider, but made perfect sense to Eddy. But I didn’t want Eddy to have to tell the reader about it, I wanted him to show it. And I didn’t want the reader’s reaction to Eddy to be filtered through any other characters.

By using third person (limited) I hoped to be able to show both what was going on in Eddy’s head and what he was missing. 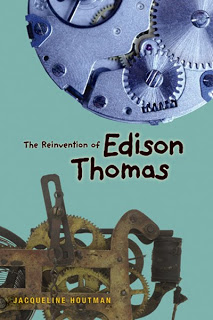 I first saw Joy Neaves speak at the 2007 Fall Retreat of the Wisconsin chapter of SCBWI (A great event, with a legendary snack table).

I had been working on The Reinvention of Edison Thomas and struggling with the two storylines–one technical and one emotional.

Joy gave this amazing talk about how the main character’s inner and outer journeys are interconnected. She drew a diagram that crystallized the relationship between these two storylines for me. In fact, her whole talk seemed to be addressing the very problems I was having with my manuscript. I remember standing there after the talk, staring at the diagram.

I spoke with Joy briefly, but not much beyond, “Hello, I enjoyed your talk. Would you like another piece of chocolate? How about some cheese curds? Have you tried the kringle?”

I was so energized after that retreat, so many ideas. (So much food.)

Over the next few months, in between freelance gigs, I made major revisions in the manuscript. I beefed up a conflict and added two chapters, referring back frequently to the notes I had taken during Joy’s talk.

Joy had already had a huge editorial influence on the manuscript before she had even seen it, so it was almost too perfect that she be the one to acquire it.

It was a delight to work with her. She would ask questions that made me look at the manuscript in new ways, to think about different ways to communicate ideas and information that would move the plot along more effectively. She asked for big-picture changes, but gave me specific ideas of how to accomplish those changes.

I think the revision process was my favorite part of the whole “path to publication.” And that’s my “Ode to Joy.”

From Boyds Mills: “Jacqueline Houtman holds a Ph.D. in Medical Microbiology and Immunology from the University of Wisconsin–Madison. She writes about a variety of biomedical topics, including asthma, cancer, multiple sclerosis, and AIDS. She lives in Madison, Wisconsin. This is her first novel.”