Richard Peck has received a Newbery Medal, a Newbery Honor, and many other remarkable awards and citations for literary work. He is also the first children’s writer to receive a National Humanities Medal.

SCBWI members and supporters feel a special connection with Richard, not only due to his long list of remarkable books for young readers, but also because many have had the pleasure of watching Lin Oliver interview Richard for the SCBWI Master Class DVD [see video below].

First, thank you so much Richard, for agreeing to answer some questions in advance of your upcoming appearance at SCBWI’s 2010 Bologna Symposium.

The Washington Post calls you “America’s best living author for young adults.” You’ve written and published an impressive 37 novels for young readers over the span of the last 37 years, and the continuity of your writing fills other writers with confidence in the knowledge that a writing career can have longevity. Is there an underlying motivation or passion that propels you?

What are the passions that still propel me, even now after thirty-seven years?

Admiring the work of younger writers and wanting to stay in their game and learning from them–M.T. Anderson, Laurie Halse Anderson, John Green, David Levithan, and more coming.

We’re in a golden age; I want to stay here.

And the other incentive? I was a teacher once. I learned that I wanted to be there at the beginning of all those young lives–a new crop every year.

And as it happens, a novel is always a question. Two questions, in fact:

l. What if I were the character in this story? What would I do?

2. And the big one: How much longer do I dare be this young?

In a September 2009 Publisher’s Weekly Q & A, you talked about one of your most beloved characters, Grandma Dowdel. In this age of digital cities and wireless connectivity, why do you think this remarkable character from days gone by resonates so profoundly with readers? 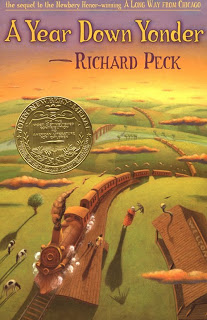 I’m moved by your inquiring after Grandma Dowdel in this electronic age.

As you know, she’s back after eight years and by popular demand (I’d have let her rest.) Why does this woman, looming out of the low-tech past in her Lane Bryant dress, still command the allegiance of the young?

The dream of adolescence is to replace your family with your friends. In this new revolution–the biggest since the revolutions of the 1960s/’70s–the young have discovered new electronic ways to eliminate parents, with the electronics paid for by parents.

Yet we write a literature of family life to a readership who can text at the dinner table.

I have to believe the secret of Grandma Dowdel’s popularity is that she’s as strong as the young quietly want their adults to be…if they can find them–at home, in the neighborhood, up their at the front of the classroom.

In an interview published in Delta Chi Quarterly’s Fall/Winter 2001 edition (PDF), you said that some of your young readers send letters asking you to write more horror. Is this what prompted you to switch gears from writing nostalgia, as you’ve done in your last several books, to writing in the horror genre again with your 2010 book release of Three Quarters Dead (Dial, 2010)? Can you tell us a little about this new book we can expect in the Fall?

I appreciate the depth of your questions. Anybody who has researched me all the way to The Delta Chi Quarterly deserves awed respect. Wouldn’t you have thought I’d be over having been a frat boy? But, actually…no. 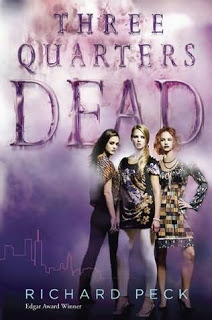 I do have a new book coming in the autumn, Three Quarters Dead, and, believe me, it’s no Grandma Dowdel.

It’s told as paranormal horror, not because I’m trying to ride that wave but because it was a story I couldn’t pull off as realistic fiction, despite the fact that it’s being enacted in every town I now visit. It’s a deadly serious story about those two inter-reacting killers: distracted driving and peer-group allegiance.

I couldn’t tell it straight without preaching; I had to tell it slant.

It’s a story about a girl with a cell phone in one hand and the steering wheel in the other, and that’s a horror story right there.

At the Ezra Jack Keats Lectures in 2000, you gave a remarkable and profound speech. One of the many beautiful things you said was something that struck me as good advice for new writers. You said, “You have to read a thousand books before you can write one.”

Your writing and revision process must be perfected down to a fine art now. Can you tell us a little about both, and is it true that you write everything on an electric typewriter?

Enough! I cannot discuss my electric typewriter. It might hear me and cease functioning, and then so would I. It makes a noise to fill this silent room.

Love to you for all your kind questions,
Richard

Richard Peck’s newest novel is A Season of Gifts (Dial, 2009), third in the sequence starring Grandma Dowdel. The first, A Long Way from Chicago (Dial, 1998)(Il Fucile di Nonna Dowdel in Italy) was the 1999 Newbery silver medalist. The second, A Year down Yonder (Dial, 2000) was the Newbery gold medal winner in 2001. Two of his novels, A Year Down Yonder and The River Between Us (Dial, 2003), were National Book Award finalists. He was the first children’s writer to receive a National Humanities Medal, in a White House ceremony in 2002. His forthcoming title, in the fall of 2010, is Three Quarters Dead (Dial).