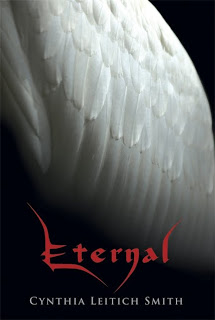 I’m pleased to announce that editor Deborah Wayshak at Candlewick Press will publish both a new prose novel and a new graphic novel adaptation in the Tantalize young adult Gothic fantasy series.

The untitled prose novel will feature pre-existing characters in the series and some new ones too.

The graphic novel will be an adaptation of Eternal (Candlewick, 2009).

The series is set in a multi-creature-verse, populated by angels, ghosts, shape-shifters (of various kinds), vampires, and some nifty human beings. The stories have strong elements of romance, some humor, and nod to various classics, most notably Bram Stoker‘s Dracula (1897).

I’m extremely excited to be writing additional books set in a spooky world that I first began to envision in 2001!

Thank you to Deborah, my agent Ginger Knowlton of Curtis Brown Ltd., everyone at Candlewick Press, my writing pals, and most of all, my readers for your continued support and enthusiasm!

Here’s the complete series to date:

Blessed (Candlewick, 2011)(a prose novel, which crosses over the casts of Tantalize and Eternal and picks up where Tantalize leaves off)

Two short stories–both with original characters–also are set in the Tantalize universe:

“Cat Calls” appears in Sideshow: Ten Original Tales of Freaks, Illusionists, and Other Matters Odd and Magical, edited by Deborah Noyes (Candlewick, 2009). Notes from the Horn Book says: “These stories reveal the stranger truths the audience is never meant to see and offer touches of humor and pathos among the thrills.”

“Haunted Love” appears in Immortal: Love Stories with Bite, edited by P.C. Cast (BenBella, 2008, 2009). Note: after a limited release in 2008, exclusive to Borders/Waldenbooks, this anthology is now available nationwide. Read an excerpt.

In other news, avid Cynsations readers may recall that my Candlewick editor Deborah Wayshak is also a children’s-YA author, publishing under the name “Deborah Noyes” (see Sideshow anthologist above). Learn more about her in this recent interview.

OF LIGHT AND DARKNESS | MySpace Video