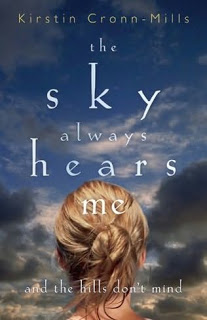 Kirstin Cronn-Mills is the first-time author of The Sky Always Hears Me and the Hills Don’t Mind (Flux, 2009). From the promotional copy:

Morgan wants out of her life in Central Nowhere. Period. Nobody’s listening, nobody cares. Even though life sucks (of course), her sane-and-urbane grandmother helps her cope with her crazy family, and her crush on co-worker Rob helps her cope with high school. Then sometimes-friend Tessa kisses her, and the world shifts.

As she solves the Tessa riddle, her grandma’s health collapses, and family secrets emerge before Morgan’s ready for them. But, as her life transforms, Morgan discovers people are listening to her. She’d better start listening, too.

I knew my book was going to be considered “edgy,” because it has LBGT themes. My main character, Morgan, grows up in Nebraska, which is a solidly conservative state, especially in its central and western regions, so it was easy to establish edginess based on the setting alone.

I chose to explore the edgy behavior in the book with no drama on the part of those participating in the behavior. Outrageous behavior comes instead from those who react to the edgy behavior. I wanted the edgy characters to be emotionally engaged with their tensions but not overwrought about them.

Given how LBGT issues remain contentious on the national stage, I believe my decision to juxtapose low-key decision-making with nutty outside reactions makes sense. I wanted the main characters to stay away from hysteria. Craziness got left to the haters, so they would look dumb in the face of serious, thoughtful consideration of the issues.

For example, Morgan’s neighbor and classmate Tessa surprises Morgan with a kiss, so Morgan (who has two boyfriends throughout the book) has to choose how to feel about it–because she liked kissing Tessa. As the book continues, Tessa is outed and is the recipient of verbal violence from other classmates. In the midst of all the outside commotion, Morgan and Tessa are working out the parameters of their relationship. There is tension, but no extra drama. As well, Morgan is coming to terms with her possible bisexuality, which is also calmly explored.

The culmination of this storyline is a pleasantly shared dance and kiss between Morgan and Tessa at their junior prom. The repercussions of prom are intense, but Morgan and Tessa remain friends.

In terms of other kinds of edgy behavior, the book also contains references to straight sex between Morgan and her boyfriend, Derek, as well as Morgan’s speculations about sex with Rob, her crush. These references are handled with relaxed sensibility, and though they’re not graphic, a reader cannot misconstrue what’s going on. Even Morgan’s grandmother handles a discussion about sex with calmness. There are also storylines about child abuse and alcoholism, and these topics are handled with emotion, but not with overt drama.

Curse words also add to the edginess of Sky. Because Morgan is a writer who loves words, for a few drafts her favorite words were four-letter ones, and lots of them. There are still carefully chosen curse words, but well-placed F-bombs are much more effective than too many.

In general, I believe in “edginess” because I believe in getting big issues on the table, and I believe in diversity and multiculturalism, which feels pretty edgy to some people. I want to discuss difficult things in my books, because talking about taboo subjects is where we learn about the intricacies of the human condition.

I don’t think I could have asked for a better profession to prepare me for being an author.

Most specifically, being a teacher informs my writing because of audience. When I teach a literature class, I have to gauge the students’ reactions to the book as I teach it, because I’ve got to help them connect their own experiences with the ones in the book. If I can’t do that (provided they haven’t done it for themselves), the experience of the book is lost to them.

Because my students are usually between the ages of 18-24, they also keep me in close contact with the needs of a YA audience–a fast pace, an ending that contains a kernel of hope, a story line about identity (in one form or another). Without an audience, a book won’t succeed.

Since I can’t be there in person to help Sky’s audience connect with my book, I have to make Morgan and her compatriots as accessible as possible.

My students also keep me current. The first few drafts of The Sky Always Hears Me had no cell phones, thanks to their nonexistence when I was growing up and my uneasy relationship with them now. That’s just plain wrong in a 21st-century teen novel, even if cell signals are difficult in central Nebraska! Students’ pre-, post-, and in-class discussions also keep me up to date on pop culture trends and what’s cool (or not), and give me first-hand looks into their own identity dramas. All of it gives me fodder for characters and storylines.

Teaching also helps me with my author presence. I’ve been presenting myself as an interesting individual for seventeen years, and creating an author persona isn’t hard to do with that much public speaking experience. If I treat my book like any other literature, school visits will be as natural as conducting class!

Scroll for photos of where Morgan lives in central Nebraska.