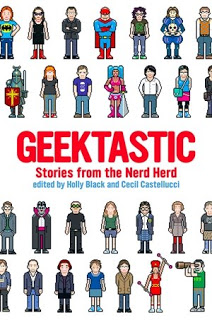 “With illustrated interstitials from comic book artists Hope Larson and Bryan Lee O’Malley, Geektastic covers all things geeky, from Klingons and Jedi Knights to fan fiction, theater geeks, and cosplayers. Whether you’re a former, current, or future geek, or if you just want to get in touch with your inner geek, Geektastic will help you get your geek on.”

My short story, “The Wrath of Dawn,” co-authored by Greg Leitich Smith, is included in the collection.

Cover of the Week: ‘Geektastic’ by Judith Rosen from Publishers Weekly. Peek: “‘This was assigned to me based on my personality; I love geeky stuff. The book immediately made me think of this group called EbOY, which does avatar designs. Initially we asked them to do fantasy figures [some of which remain on the cover, like Geeky school girl and Superhero]. Those were so cool, we asked them to do the authors. We gave them full-sized photos, and they managed to capture the author’s personalities.'”

Geektastic Giveaway from Bookluver-Carol’s Reviews. Peek: “So do you want to win 1 in 5 copies? Just leave a comment telling me about your geektastic story. It can be real or made up, but it has to be geektastic. There are no length requirements; it can be as long (or short) as you like.” Deadline Aug. 17! Enter to win here, not at Cynsations.