Mary Hooper on Mary Hooper: “I’ve been writing books for children and young adults for about twenty years. I’m happily (re)married with two grown children and live about forty miles outside London.”

I was an only child and not born until my mum and dad were forty, so I think my teenage years were a bit of a shock to them. I hit my teens in the sixties and was lucky enough to come from West London, where I saw the Rolling Stones every Sunday (then later, Eric Clapton and the Yardbirds) at the local athletic ground. I had some great times.

What helped me was not starting off with any great expectations. Had I begun writing today, in the shadow of J. K. Rowling, I might have felt too intimidated to even try.

I started off by writing short stories for magazines, which was a great way in and not too daunting. You learn what works and what doesn’t, and if no one takes your stuff, at least you haven’t wasted too much time over it.

Gradually, my stories got longer and longer until they reached book size, and there I was, a writer.

I don’t consciously think of the age of my audience or my main character, but write the sort of things that I like to read. The main reason I began to write books for children, rather than adults, is that they were shorter.

I was at home, rather bored, with two small children, read a short story in a magazine and thought, I can do that!

When I’d written and sold lots of stories I sent some tear sheets from the magazines to a publisher of teen books saying I’d like to write a book, so how about it? (It’s different and far more difficult now!)

About six years ago, I ran out of ideas for modern teen novels (and also got a bit baffled with all the new technology business: mobile phones, texting, blackberries, ipods, etc., knowing that if I was going to write credible books for teens, I’d have to have them in there). It was then I decided to write historical fiction.

Could you please update us on your recent back-list and/or current titles, highlighting as you see fit?

A book I particularly love is The Remarkable Life and Times of Eliza Rose (Bloomsbury, 2006), about two babies who are exchanged at birth. This is set around the Court of the Merry Monarch, Charles II.

Before this, came a book about London’s Great Plague: At the Sign of the Sugared Plum, and its follow-up about the Great Fire of London: Petals in the Ashes (also published by Bloomsbury, 2003/4).

At the moment, I’m writing a third book about Dr. Dee, who was a magician at the Court of Elizabeth I (the first two in this series books are At the House of the Magician and By Royal Command, published in the U.K. by Bloomsbury but not yet sold to the U.S.).

How have you grown as a writer over time? What do you see as your strengths? In what areas do you feel as though you must still push yourself?

Early on I realized the importance of moving with the market. When animal books were popular, these were what I wrote, ditto diary books, issue books, funny books, etc.

The only thing I haven’t attempted is fantasy, because I know I wouldn’t be any good at it, and also because I like my books rooted in reality. My historicals contain real people (Nell Gwyn, The naughty Earl of Rochester, gorgeous highwayman Claude Duval, Dr Dee, Aphra Benn, etc.) As to pushing myself, well, I should really test my skills by seeing if I can manage to write a book with multi-viewpoints, but I much prefer writing in the first person. 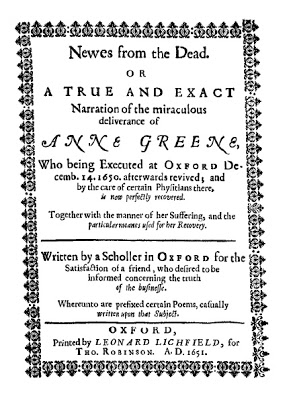 Congratulations on the release of Newes from the Dead (Roaring Brook, May 2008)! Could you tell us a bit about it?

It’s the true story of Anne Green, a maidservant, who in 1650 was seduced by the grandson of her employer. She found herself pregnant, miscarried the child and was taken to be hung for infanticide.

After hanging for half an hour, her body was cut down and taken to the dissectionist at an Oxford college. When the physicians gathered and lifted the coffin lid to begin the procedure, they heard a rattle in her throat…

I heard Anne Green’s story on the car radio and thought, Wow! I was supposed to be taking the car in for a service but, sitting there listening, I missed my time slot.

At the time, there was a major competition going on in the U.K. to write the first chapter of an adult novel, so I did a little research, then sat down and wrote a few thousand words about Anne Green.

Seeing as I’d written lots of YA novels, I thought I might be in with a chance, but I didn’t even get a mention.

I sent the start of the book and a synopsis to my agent, Rosemary Canter, who said I’d have to write the whole thing before she could send it out, so I took six months off writing my commissioned books to do just that.

The more I found out, the more fascinated I became; it seemed that this was the story idea I’d been waiting for (and how come no one had found it before?) When I’d finished it Rosemary sold it to Random House, who then sold it on, after a bidding war, to Roaring Brook Press. It’s now been three years since the “spark.” 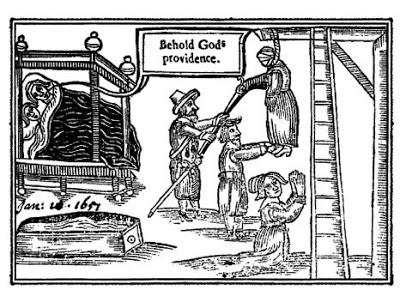 There is not much written about Anne herself, rather more about the doctors who saved her, so it was just a case of putting down the facts, what was actually recorded at the time, and then fitting the other bits (customs, dress, housing, food, servant/master relationship, medical practice, etc) around what I knew for sure.

Finding out that Christopher Wren was present was a bonus, as was discovering that Charles I had visited the house where Anne was a servant, and then that Sir Thomas Reade had died within a few days of Anne’s ordeal.

As I wrote, it all seemed to come together. I found it easier having a template to follow instead of writing a pure fiction story where you find yourself having to decide between with ten possible endings.

The language is mesmerizing! It’s a beautifully evocative read. Did you read texts of the era? Jump into a time machine?

I had been reading Pepys Diary for gossip and information, and–like one finds themselves speaking in mock-Shakespearian after seeing a couple of his plays (well, I do!)–I found myself thinking in Olde Englishe. It’s just a matter of rearranging words and altering the rhythm of people’s sentences rather than lots of “prithees” and “unhand me, knaves!”

What advice do you have for writers of historical fiction?

People are the same whatever century they’re living in–but they will already know this.

I am hoping to write another book about Anne Green and find out what happened to her afterwards.