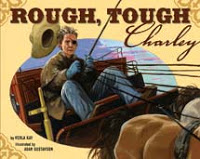 Verla Kay writes historical picture books in a special kind of poetry she calls “cryptic rhyme.” She has sold a total of eleven picture books, three of which are still “in the works.”

All eight of the books that have been published have received recognition, including Tattered Sails, illustrated by Dan Andreasen (Putnam, 2001), which was named a Child’s Best Book of the Year by Child Magazine.

Verla Kay’s website, which she designed and maintains herself, was named one of the 101 Best Websites for Writers in 2000 and again in 2005 by Writer’s Digest. Her message board page has gotten an average of over 600,000 hits per month since January of 2007.

Besides writing award-winning picture books, Verla is an instructor for the Institute of Children’s Literature.

Congratulations on the release of Rough, Tough Charley, illustrated by Adam Gustavson (Tricyle, 2007). Could you fill us in on the story?

Charley was a renowned stagecoach driver from the 1850’s and 60’s, who was best known after death when the doctor preparing Charley’s body for burial discovered “he” was a “she!” Charley was acclaimed as the best and fastest stagecoach driver in the motherlode (gold country in California) and was so well-respected as a “man” that she was buried with full Odd Fellow’s Lodge honors even though she was a woman.

Charley’s grave was two blocks from the home I lived in as a teenager, and I thought everyone knew about her until I moved away from Watsonville, California. She was one of the first women to ever vote for a president (might even have been “the” first!), voting 52 years before women were given the vote.

I have been captivated by Charley’s story ever since I first heard it. When I learned that everyone didn’t know about Charley, I wanted to share it–especially with children, who could derive inspiration and hope from it.

Charley seems to tell kids, “You can do anything with your life you want to do, as long as you are willing to sacrifice and work hard for it.” Charley wanted to drive stagecoaches in a day when women were “just” housewives and mothers. In order to do what she wanted to do, she had to “become” a man. So she did.

Since 1994 I have written this story four times–as a picture book, an easy reader, a short 10 chapter book, and again as a picture in my own style of cryptic rhyme. It sold in 1998 in its chapter book form.

I waited five years for it to be published, and the week it was going to print, it was canceled, as Millbrook Press was being bought out by Lerner and the new publishing company didn’t want to pick it up. That’s when I rewrote it in cryptic rhyme.

While it was under negotiation for publication by Tricycle Press, Lerner contacted me via email and asked if they could publish it. Ha! Too late. After Tricycle Press bought it, it came out within 1 1/2 years–in May of 2007.

This was a tough story to bring to life, not because of Charley, who was a very colorful character in her own right, but because of the restrictions of writing a non-fiction historical biography about a person of whom so little was ever written. There’s no one left alive who ever knew Charley in person, so the only material available is the little that was written about her by a novelist who once rode with Charley, and the obituary notices in the newspapers of her time, an affidavit from the grandson of the doctor who laid Charley out for burial, etc.

You can only write what is known and some of the facts that have been written about Charley since her death are conflicting, making it even more difficult to know what was really “true.” Some things I just left out of her story altogether, rather than possibly tell something that might not be accurate.

What did Adam Gustavson‘s illustrations bring to your text?

Adam’s illustrations are incredible and I am so pleased with them! They added depth, excitement, drama, and historical details that I could never have fit into my spare text. They truly brought the book to life.

Learn! Learn all you can about what makes a good, strong children’s story. Learn all you can about the marketing aspect of the business, because you can write the best story in the world, but if you don’t know how to get it onto the desk of the editor who will love it, you may find it impossible to sell. And finally, if you truly believe in your story, never give up on it. Rewrite it if you need to. More than once if you need to, but keep sending it out if you honestly believe in it.

You have one of the premier author websites! Could you tell us a bit about it? What’s new and exciting?

The most active part of my website is its message board. It’s been averaging over 600,000 hits per month every month since January of 2007. It’s become a very well-known forum for children’s writers and illustrators to gather and share information.

What do you do when you’re not writing or doing writing-related activities?

For the past five years we have been renovating our old farmhouse style home, which we were finally able to move into two years ago. There’s still one more major construction job to do inside the house (an 8 foot wide, 9 foot tall wooden and marble fireplace surround) and then the inside will be mostly done. Hooray!

I love, love, love to play Puzzle Pirates online and can be found there sailing and pillaging with other online pirates most nights after the rest of my work is done.

I spend many hours a day working with new writers, teaching through the Institute of Children’s Literature–a correspondence course known by most writers as ICL.

Whenever possible, I play games and spend time with my teenaged grandchildren, entertain overnight guests, and I love watching Nicie in “Clean House” on TV. (Maybe some day her clean house habits will overflow into my home? I hope so! I’m definitely a “clutterbug” by nature.)

How do you balance your life as a writer with the responsibilities (speaking, promotion, website, etc.) of being an author?

That’s a toughie. I don’t. I just do what I have to do when I have to do it. Sometimes it involves pulling almost an “overnighter,” which isn’t easy for me now that I’m getting older.

The next book scheduled to come out is Pony Express, which will be released in 2010. Putnam have two artists working on it, as it’s a “double” book. There’s one story in the cryptic rhyme text and a second story that will be in the letters going back and forth between a brother and his sister in the artwork. I’m very excited to see what the artists will be doing with this book!

Another book that’s “in the works” is Hornbooks & Inkwells. Putnam has just hired an artist for it. I’m very pleased to know that S.D. Schindler, the same artist that illustrated Gold Fever and Covered Wagons, Bumpy Trails will be illustrating that book, too. I haven’t heard yet when this might be scheduled for publication. It will depend on Mr. Schindler’s schedule and when he will have time to finish it.

There’s one more book under contract–Drummer Boy. This will be the Civil War through a drummer boy’s eyes, and it’s also written in cryptic rhyme. The text has recently been finalized for it, and Putnam is currently (I hope!) searching for just the right illustrator for it. After an illustrator has been found for this book, it will be scheduled for a future publication date (usually about two or three years after the illustrator has been hired.)

I’m currently working on a very different kind of story–my father’s WWII POW story. He was a prisoner of war in Stalag Luft I prison camp in Barth, Germany for the better part of two years during he war. I plan a totally different kind of book for this one, encompassing several different kinds of writing, and some unusual artwork. You’ll have to wait until it’s done to see what I’m doing with it.