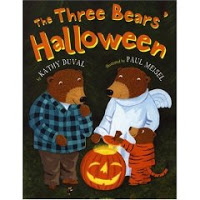 Congratulations to Kathy Duval on the publication of The Three Bears Halloween, illustrated by Paul Meisel (Holiday House, 2007). From the promotional copy: “Boo! It’s finally Halloween. Baby Bear is trick-or-treating with Mama Bear and Papa Bear. As the bears come up to the very scary house, they notice that the door is open. Maybe they should go inside. But is that a ‘tee-hee-hee’ coming from behind the bush? Could the three bears be in for a Halloween trick? Goldilocks gets a visit from the three bears in this spooky companion book….” Read a Cynsations interview with Kathy on The Three Bears Christmas.

Finalists for the Writers’ League of Texas Teddy Awards have been announced. In the short-works category, the finalists are: Blue the Bird on Flying by Becky Due (Due Publications, 2006); Grandpa for Sale by Dotti Enderle and Vicki Sansum, illustrated by T. Kyle Gentry (Flashlight, 2006); The Man Who Named the Clouds by Julie Hannah and Joan Holub, illustrated by Paige Billin-Frye (Albert Whitman, 2006). And in the long-works category: Journey to the Alamo by Melodie Cuate (Texas Tech, 2006); Long Gone Daddy by Helen Hemphill (Front Street, 2006)(author interview); and Alpha Dog by Jennifer Ziegler (Delacorte, 2006)(author interview). The awards ceremony will be held during the Texas Book Festival, Nov. at 3 p.m. in Capitol Extension Room E2.030. Read Cynsations interviews with Dotti, Helen, and Jennifer. 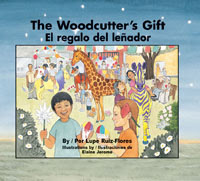 YA Author Gail Giles has revamped and expanded her official site. It now features additional pictures, a teacher’s guide for What Happened to Cass McBride (Little Brown, 2006), unofficial trailers for her books, and a page about school visits. Read a Cynsations interview with Gail.

Attention MySpacers! On the online events front, I’m honored to be featured as one of 31 Flavorite Authors by the Readergirlz on Oct. 29! I’ll be chatting about Tantalize (Candlewick, 2007) .

Look for the “Dear Author” feature with me in the November issue of the Kidsville News! See if Kidsville News is published in your area! Note: special thanks to compiler and children’s author Kim Norman.

Reminder: Are You Predator or Prey? Giveaway Contest: In recognition of October’s spookiness, I’m giving away three Tantalize (Candlewick, 2007) prize packages–two to people (booksellers, teachers, librarians) who connect books to YA readers and one to an individual reader. The packages each include an autographed copy of Tantalize, a Sanguini’s T-shirt, bat and wolf finger puppets, stickers, and additional surprises! In addition, the individual winner will receive one signed Tantalize bookmark, and the bookseller/teacher/librarian winners will receive twenty signed bookmarks. I’ll also send autographed bookmark stacks to at least three runners-up in the bookseller/teacher/librarian category. Deadline Oct. 15. See details!

From the promotional copy: “In the realm of Faerie, the time has come for Roiben’s coronation. Uneasy in the midst of the malevolent Unseelie Court, pixie Kaye is sure of only one thing–her love for Roiben. But when Kaye, drunk on faerie wine, declares herself to Roiben, he sends her on a seemingly impossible quest. Now Kaye can’t see or speak to Roiben unless she can find the one thing she knows doesn’t exist: a faerie who can tell a lie.

“Miserable and convinced she belongs nowhere, Kaye decides to tell her mother the truth–that she is a changeling left in place of the human daughter stolen long ago. Her mother’s shock and horror sends Kaye back to the world of Faerie to find her human counterpart and return her to Ironside. But once back in the faerie courts, Kaye finds herself a pawn in the games of Silarial, queen of the Seelie Court. Silarial wants Roiben’s throne, and she will use Kaye, and any means necessary, to get it. In this game of wits and weapons, can a pixie outplay a queen?

“Holly Black spins a seductive tale at once achingly real and chillingly enchanted, set in a dangerous world where pleasure mingles with pain and nothing is exactly as it appears.”