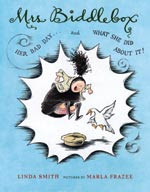 Marla Frazee is a children’s book author-illustrator. She teaches children’s book illustration at Art Center College of Design in Pasadena, California and works in a small studio cabin in the backyard under an avocado tree.

Could you please describe your path to publication, any bumps or stumbles along the way?

My path to publication? It was long, dusty, uphill, and without water or shade. And it took about ten years. Meanwhile, my path to becoming a freelance commercial illustrator was so easy it seemed like I was on one of those motorized walkways at airports. I breezed along, but I was doing work I didn’t want to do–advertising, toys, games, etc.

I’ve always wanted to be a children’s book illustrator, and when I graduated from Art Center College of Design, I left with a portfolio that I hoped pointed me in that direction. But publishers kept telling me that my illustration style was too commercial. I’ve come to understand that my work at that time wasn’t narrative. Now I teach and I try to address this with my students so that they can figure out in fourteen weeks what took me ten years to discover.

Could you give us a snapshot of your backlist titles, highlighting as you see fit?

I have illustrated a few books about complicated family dynamics with an emphasis on “mother anger” and/or parental exhaustion, such as The Seven Silly Eaters, written by Mary Ann Hoberman (Harcourt, 1997) and Harriet, You’ll Drive Me Wild, written by Mem Fox (Harcourt, 2000).

And in addition to Walk On!, I’ve written and illustrated Roller Coaster (Harcourt, 2003), Santa Claus the World’s Number One Toy Expert (Harcourt, 2005)(author interview), and A Couple of Boys Have the Best Week Ever (Harcourt, 2008).

I am also illustrating a series of chapter books about a character named Clementine by Sara Pennypacker (Hyperion, 2006-).

Congratulations on the re-release of Mrs. Biddlebox: Her Bad Day…And What She Did About It! by Linda Smith (Harcourt, 2007), first published by HarperCollins in 2002. First let’s back up to the beginning. What first inspired you to illustrate Linda Smith’s text?

I loved this text from the minute I read it, but it scared me. So I turned it down. About two months later I got it out again, felt like an idiot for turning down such a gorgeous and emotional text, and called the editor to ask if it was still available. Luckily, it was.

In the beginning I was afraid of it because I’d heard that the author, Linda Smith, wrote the story while battling breast cancer and it was in response to a very bad day she was having as a result of her treatment. I’d heard that her cancer was quite advanced, that she was 39 years old, and that she had eight kids–the youngest one was four or five at the time.

When I illustrate a text, I immerse myself in the world of the story for a year or more. I selfishly felt that I didn’t want to–or couldn’t–go to the place I needed to go to do justice to her text because it would be too sad. But when I read it again later, I realized that I could. Linda’s situation was indeed very sad, but her text is funny, irreverent, whimsical, and highly imaginative. And this was what I focused on when I illustrated it.

What what were the challenges (artistic, research, psychological, and logistical) in bringing the story to life? What were the major events along the way?

The primary challenge for me was how to portray depression in a book for children because that is essentially what the book is about. Mrs. Biddlebox wakes up in a bad mood and proceeds, in anger, to take the entire day apart. This is a pretty intense premise for children. I wanted the book to seem real, in that this was a character the reader could relate to. And yet, the book by its fantastic nature, had to feel unreal as well.

I eliminated a lot of the details that I normally put in my pictures to create a familiar world. Mrs. Biddlebox lives in a weird house on a bleak hill. She has hardly any furniture. She is child-sized, which I think makes her appear more vulnerable and overwhelmed by her surroundings. These were all conscious decisions. And most importantly, she has no family–only a pet goose.

Before I began working on Mrs. Biddlebox, I called Linda to ask her if there was anything she’d like to tell me about her text before I got started. She was way too professional to engage in this dialogue with me, and she kept saying that she didn’t want to say anything that would influence me. Finally after much prompting, she said that she always imagined that Mrs. Biddlebox had a pet of some kind–a mangy dog, or a skinny cat, or something.

After Linda had died and I started working on the story, I tried drawing a cat, a dog, then a raccoon, and even a goat, before I realized that Mrs. Biddlebox’s pet just had to be an angry goose. My agent, Steve Malk, was also Linda’s agent, and he suggested that we send the sketches to Linda’s husband and kids so they could see how the book was developing. We received an email back from her husband that said Linda once had a goose named Gabby who would follow her around and bite her through her blue jeans, actually drawing blood. He told us that Linda would have been delighted.

This email about that goose made me feel like I was doing right by Linda and that was very important to me.

What happened after publication?

The book was embraced wholeheartedly by HarperCollins, and I think they had high hopes for it. It won some significant awards, including the Borders Original Voices Award and the Golden Kite Award from the SCBWI. It was a Parents’ Choice Award Winner, a BookSense recommended book, a Southern California Booksellers Association Award finalist, on the Miami Herald Best Book list, starred in Publishers Weekly, and took second place in the New York Book Show.

And then it went out there and didn’t sell well. It was a bummer.

How did the possibility emerge that the book would be brought into print by Harcourt? What steps were involved?

My editor, Allyn Johnston, the Editor in Chief of Harcourt Children’s Books, has always been a big fan of this book even though I worked on it with another editor at another house.

Allyn and I were speaking at a SCBWI conference together, and while there, she spent some time paging through the book again. Before we left the conference, she had decided to pursue bringing the book to Harcourt where I’ve been publishing for many years. At that point, neither one of us knew that the book was already out of print at HarperCollins. Once we found that out, it was pretty straightforward.

If you could go back in time and speak to yourself at any point during this story, what moment would you choose and what would you say?

This is such a fascinating question. I began working on Mrs. Biddlebox by doing thumbnail sketches (which is how I begin all of my picture books). It was a couple months after Linda Smith had died. In puzzling out the ending, I realized that I was going to bring Mrs. Biddlebox up to the rooftop on some rickety stairs into what could be interpreted as heavenly light–and by doing so, I was making the end of the book a metaphor for death. It seemed be what the book needed.

I sat there crying for Linda, her kids, the immense loss of this person I never met but felt so connected to, wondering if this was really the right decision for the book or if I was just milking the sadness.

I wish I could go back to that moment and tell myself that it was okay, even desirable, to feel all of that. Children’s books are an emotional medium. They can be interpreted in all kinds of ways. But when strong emotions fuel the creative process, it is always, always, always a good thing for the book.

What do you do when you’re not creating children’s books?

I’m married to a photographer and we’ve got three sons and a dog named Rocket. I teach Children’s Book Illustration at Art Center College of Design. I spend a lot of time hiking in the hills above Pasadena. I lead a caffeinated life and therefore I have to listen to music that calms me down.

Next up is a picture book I wrote and illustrated called A Couple of Boys Have the Best Week Ever (Harcourt, 2008). It was inspired by a week that my youngest son, James, and his friend, Eamon, spent together one summer. It is part comic book, part buddy movie, part Malibu. I had the Best Time Ever working on it. And it even comes with an idea for a Make-a-Penguin craft out of mussel shells and rocks.