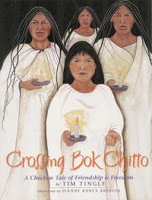 In the long works (middle grade/YA) division, the finalists were Tofu and T. rex by Greg Leitich Smith (Little Brown, 2005)(author interview) and Czar of Alaska: The Cross of Charlemagne by Richard Trout (Pelican, 2005).