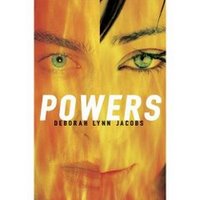 Deborah Lynn Jacobs is the author of Powers, (Roaring Brook, 2006), and The Same Difference (Royal Fireworks Press, 2000) Her next book, Choices, will be released by Roaring Brook Press in fall, 2007. Visit her LJ and MySpace.

I was eight when I wrote my first novel. It was a space opera type book, about two kids who stowed away on a Federation starship. However, I floundered in the middle of the novel, which is something that still happens to me, and didn’t finish it. I wish I still had the book, but it was disposed of years ago.

In high school, I was a reporter and later editor of our school newspaper. I joined the newspaper to make friends, but found I liked the writing as well.

In my professional life as a counselor, I found ways to bring writing into my job–a departmental newsletter, a back-to-school guide for adults, research projects. But it wasn’t until I left my full-time job and moved to a small town in northwestern Ontario that I got back to writing–newspaper features, magazine articles, and my first attempts at writing a novel.

My first novel was an adult science fiction novel. Really awful writing, now that I look back on it. After two rejections, I stuffed in a drawer where it belonged.

I realized that the issues people face in their late teens were far more interesting to me. It’s such a wonderful time of life, and so incredibly exciting to be on the verge of adulthood. Suddenly, the decisions you make–who to date, what school to go to, what career to choose–become life decisions. Sure, you can go back and change your mind, but only to some extent. The decisions you make as an eighteen-year-old have a lasting effect on your life. It’s that whole “road not taken” thing, and I find it fascinating.

Sprints? Hmm…not so many. It was pretty much a slow and steady thing. Write, rewrite, submit, revise–the usual. There were times where I wrote very little because of the necessity of making a living!

Stumbles along the way? A few. I rewrote Powers a gazillion times. I wrote it as a stand alone book, then rewrote it as the first two books of a series, then collapsed the two books into one. At that point, Deborah Brodie of Roaring Brook read it. She gave me editorial advice, the most difficult of which was “cut about a hundred pages.” Gulp. So, I cut a third of the book, slashed a few subplots, changed the ending, and resubmitted the book. Thank goodness she accepted it!

Congratulations on the publication of Powers (Roaring Brook, 2006)! What was your initial inspiration for writing this book?

It actually evolved from the first book I wrote for kids. The Green Stone. See, this kid finds a green stone, which is actually a meteorite, and it gives him special powers–the ability to fly, to talk to his dog through telepathy, etc. (Pretty hashed-over premise, if you ask me.)

That book evolved into A Power of Our Own. This guy, and his autistic sister, find this meteorite (it’s green) and that allows them to talk to alien dragon guys through telepathy. Only, the alien dragon guys are bad guys, who collect kids from many planets and put them in a zoo. The kids, from all over the universe, find their latent powers are unlocked by the dragon’s stone and each kid develops a power of their own and, naturally, they defeat the dragon alien bad guys. (Don’t laugh–this could happen!)

A kind editor told me she liked the autistic-sister angle, but the dragons really threw her. So, A Power of Our Own became two books: one about a girl with an autistic sister (The Same Difference (Royal Fireworks, 2000)) and a book about two teens with psychic powers (Powers (Roaring Brook, 2006)).

The initial inspiration, though, for all of this, was my sense of awe about things that are mysterious, things we can’t explain in the usual way. I’m not saying psychic powers are real, but I’m not saying they aren’t real either!

I started writing Powers in 1994. I had an idea that I wanted this book to be about how developing special powers would affect two people on a personal level. I didn’t want the book to be about defeating some villain, or saving the world. Powers is a much more intimate exploration than that, about the power struggle between two people, and the power struggle within each of them.

The two voices. At first, they both sounded like “me.” It took some time, some advice from my critique groups and my first readers (my kids and their unsuspecting friends!) to make the voices distinct.

The psychological (and psychic) relationship between Gwen and Adrian is fascinating. How did you manage their tug-of-war?

I managed it slowly. At first, Adrian was such a nice guy. So sweet and understanding. Gwen was the spunky, sarcastic one. But you know what? It didn’t work. My critique buddies, and my first readers, read early versions and said Adrian sounded like a girl. Sigh.

I needed more conflict, more friction. In early drafts, Adrian and Gwen worked together to solve crimes and save people. No friction. No sparks. No fireworks.

I put the book away for months, or maybe a year at a time, while I worked on other books. Then I realized that what I wanted to write wasn’t a book about two people using their powers for good. It was far more interesting to have them at each other’s throats, manipulating each other and using each other.

Plus, it was a heck of a lot more fun to write!

I took a lot of long walks, with a little notebook. I’d ask each character, “What do you want most? What will devastate you most if you don’t get it?

I also flowcharted the scenes, using colored pens, to make sure the conflict was steady, and that no one character took over the story for too long. So, part of writing the book was technical, rather than artistic.

Still, it wasn’t sharp enough. Not until I changed Adrian’s voice to first person, present tense. Wow. All of a sudden, I could hear him. Could see him. Even dreamed about him.

Never give up. Don’t lose faith in yourself. I truly believe success in writing is 99% perseverance and learning the craft.

Cooking. I use a lot of garlic, onion and hot spices, so beware!

Choices, in the fall of 2007. I’d tell you about it, but I can’t figure out how to do that without totally giving away the plot! I’d call it speculative fiction, with a twisty plot and a few surprises!