MUSKRAT WILL BE SWIMMING by Cheryl Savageau (Abenaki-French Canadian), illustrated by Robert Hynes, featuring a Seneca traditional story retold by Joseph Bruchac (Abenaki)(Northland, 1996). When a young Native girl is called “Lake Rat,” she is comforted by Grampa who both reveals how he was once called “Frog” because of his French-Indian heritage and shows how those intended insults are signs that the bullies don’t appreciate the joy of the frog and wonder of the lake. Ages 4-up.

THE STORY OF THE MILKY WAY, A CHEROKEE TALE by Joseph Bruchac (Abenaki) and Gayle Ross (Cherokee) with paintings by Virginia A. Stroud (Cherokee-Muscogee)(Dial, 1995). A spirit dog has been stealing the corn meal, and he can be driven away only with the combined efforts of a young boy, Beloved Woman, and the entire village. Read this book to find out why the Cherokee people call the Milky Way “the place where the dog ran.” In “The Origin of the Story,” Bruchac and Ross share how they came to know and be inspired by the story. Stroud’s artwork depicts of Cherokee life in the early 1800s, after the coming of the Europeans and before the Trail of Tears. In a wrap-around, her illustrations show how Cherokee people today pass down their traditional stories to children. Ages 4-up.

AT THE MOUNTAIN’S BASE by Traci Sorell (Cherokee), illustrated by Weshoyot Alvitre (Tongva/Scots-Gaelic)(Kokila, 2019). A Cherokee family waits and prays for the return of their loved one, a woman military pilot, to return home from war. Ages 4-up. More and more on this title from Cynsations.

BIRDSONG by Julie Flett  (Cree-Métis)(Greystone Kids, 2019). An intergenerational tale of friendship and changing seasons. Ages 4-up.

BOWWOW POWWOW: BAGOSENJIGE-NIIMI’IDIM by Brenda J. Child (Red Lake Ojibwe), illustrated by Jonathan Thunder (Red Lake Ojibwe), translated into Ojibwe by Gordon Jourdain (Lac La Croix First Nation)(Minnesota Historical Society Press, 2018). Windy Girl’s uncle shares stories with her of cultural traditions and dances. Windy herself tells stories about her dog, Itchy Boy, and how he dances, too. They all attend a powwow, and then Windy Girl dreams of a powwow for dogs. Ages 4-up. More on this title from Cynsations.

BUILDING A BRIDGE by Lisa Shook Begaye, illustrated by Libba Tracy (Northland, 1993). On the first day of kindergarten, Mrs. Yazzie encourages Juanita, a Navajo girl, and Anna, a white girl, to work together to build a bridge of magical multi-colored blocks. Ages 4-up.

CIRCLE OF WONDER: A NATIVE AMERICAN CHRISTMAS STORY by N. Scott Momaday (Kiowa)(Clear Light, 1993). Inspired by the author’s first childhood Christmas in Jemez Pueblo, this is the story of Tolo, a boy who follows a man who seems to be his late grandfather. Ages 5-up.

THE CLOUD ARTIST: A CHOCTAW TALE by Sherri Maret (Choctaw), illustrated by Merisha Sequoia Clark (Choctaw)(Roadrunner, 2017). Leona is born a cloud painter. When she’s invited to join a carnival, she must decide what to do with her ability. Ages 4-up. More on this title from Cynsations.

FOX SONG by Joseph Bruchac (Abenaki), illustrated by Paul Morin (Philomel, 1993). A gentle story about the relationship of Jamie and her Granma Bowman and about Jamie’s acceptance of Granma’s death. Ages 4-up.

FRY BREAD: A NATIVE AMERICAN FAMILY STORY by Kevin Noble Maillard (Seminole), illustrated by Juana Martínez-Neal (Peruvian-American)(Roaring Brook, 2019). A celebration of family and fry bread, which begins with a peek into daily life and transitions to expository nonfiction. Ages 4-up. More on this title from Cynsations. 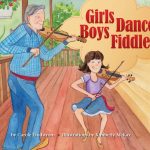 GIRLS DANCE, BOYS FIDDLE by Carole Lindstrom (Anishinaabe/Métis), illustrated by Kimberly McKay (Pemmican Publications, 2015). Young Metisse may think she has two left feet when it comes to dancing, but her hands know how to coax beautiful music from a fiddle. If only everyone would understand. A funny yet resonant story of a girl who has to challenge tradition to prove that she can fiddle with the best. Ages 6-up. More on this title from Cynsations. Compiled from promotional materials.

THE GOOD LUCK CAT by Joy Harjo (Muscogee), illustrated by Paul Lee (Harcourt, 2000). Aunt Shelly says that Woogie is a good luck cat. As he survives one scrape after another, her analysis seems to be right on target. But one day when he doesn’t come home, we wonder if this good luck cat’s ninth life has run out. This is a delightful look at the daily-life friendship between a cat and a young girl. Ages 4-up.

by Cynthia Leitich Smith (Muscogee), illustrated by Cornelius Van Wright and Ying-Hwa Hu (Morrow/HarperChildren’s, 2000)(Heartdrum, 2021). Jenna, a Muscogee-Ojibwe girl, wants to jingle dance at the upcoming powwow. With time running short, she seeks the assistance of women of her contemporary intertribal community in bringing together her regalia. A story of reciprocity and respect. Ages 4-up.

LESS THAN HALF, MORE THAN WHOLE by Kathleen Lacapa (Mohawk-English-Irish) and Michael Lacapa (Apache-Hopi-Tewa), who also is the illustrator (Northland, 1994). When Will calls Tony “only half, or less than half Indian,” Tony tries to figure out what that means. With TaTda’s (Grandfather’s) help, Tony realizes that, like the Creator’s gift of corn, he is whole. Ages 4-up.

A MAN CALLED RAVEN by Richard Van Camp (Dogrib), illustrated by George Littlechild (Plains Cree)(Children’s Book Press, 1997). Chris and Toby go after a raven with their hockey sticks, but a mysterious man enters their lives and his story changes their view. Ages 5-up. 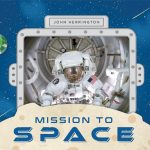 MISSION TO SPACE by John Herrington (Chickasaw)(White Dog Press, 2016). Astronaut John Herrington shares his passion for space travel and his Chickasaw heritage as he gives children a glimpse into his astronaut training at NASA and his mission to the International Space Station. Learn what it takes to train for spaceflight, see the tasks he completed in space, and join him on his spacewalk 220 miles above the earth. Illustrated with photos from Herrington’s training and space travel and includes an English-to-Chickasaw vocabulary list with space-related terms. Ages 5-up. More on this author from Cynsations. Compiled from promotional materials. 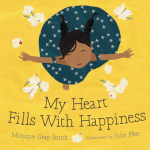 MY HEART FILLS WITH HAPPINESS by Monique Gray Smith (Cree-Lakota), illustrated by Julie Flett (Cree-Métis)(Orca, 2016). The sun on your face. The smell of warm bannock baking in the oven. Holding the hand of someone you love. What fills your heart with happiness? All ages. More on this title from Cynsations. Compiled from promotional materials. Look for WHEN WE ARE KIND by Monique Gray Smith (Cree-Lakota), illustrated by Nicole Niedhardt (Navajo)(Orca, 2020).

ON THE TRAPLINE by David A. Robertson (Norway House Cree), illustrated by Julie Flett (Cree-Métis)(Tundra Books, 2021). A boy and Moshom, his grandpa, take a trip together to visit a place of great meaning to Moshom. A trapline is where people hunt and live off the land, and it was where Moshom grew up.

SONGS OF SHIPROCK FAIR by Luci Tapahonso (Navajo), illustrated by Anthony Chee Emerson (Navajo)(Kiva, 1999). All the joy, excitement, family love and creativity of the fair brought to life. Ages 5-up.

SKYSISTERS by Jan Bourdeau Waboose (Ojibwe), illustrated by Brian Deines (Kids Can Press, 2000). Big sister Allie and little sister Alex bundle up, venture into the night, encounter a deer, dance beneath the stars, and watch the northern lights. Lovely. Ages 5-up.

TWO PAIRS OF SHOES by Esther Sanderson (Pas Reserve) and illustrated by David Beyer (Cree)(Pemmican, 1998). For Maggie’s eighth birthday, she receives a pair of black patent shoes from her mother and a pair of moccasins from her Kokum (grandmother), who reminds her there are times and ways to wear each. Ages 3-up.

A WALK TO THE GREAT MYSTERY by Virginia A. Stroud (Cherokee-Muscogee)(Dial, 1995). Dustin and Rosie take a walk with their Grandma Ann, a Cherokee medicine woman, and gain insight into the Great Mystery. Ages 4-up.

WE ARE GRATEFUL: OTSALIHELIGA by Traci Sorell (Cherokee), illustrated by Frané Lessac (Charlesbridge, 2018). A year-round celebration of the Cherokee concept, celebrations and experiences of gratitude. Ages 4-up. More on this title from Cynsations.

WE ARE WATER PROTECTORS by Carole Lindstrom (Anishinaabe/Métis), illustrated by Michaela Goade (Tlingit)(Roaring Brook, 2020). Native people come together to protect the Earth from environmental destruction. A gorgeously illustrated, beautifully written rallying cry. Ages 4-up. More on this title from Cynsations.

WHERE DID YOU GET YOUR MOCCASINS by Bernelda Wheeler (Cree-Saulteaux-Scottish-French) and illustrated by Herman Bekkering (Peguis Publishers (now Portage & Main Press), 1982). Introduces the balance of traditionalism and contemporary life to very young children. Ages 3-up.

WHERE WONDER GROWS by Xelena González (Tap Pilam Coahuiltecan), illustrated by Adriana M Garcia (Cinco Puntos Press, 2021). Granddaughters gather around their grandmother as she points them to the wonders in her marvelous garden. Ages 4-up.

CHILDREN OF NATIVE AMERICA TODAY by Yvonne Wakim Dennis (Cherokee) and Arlene Hirschfelder with a forward by Buffy Sainte-Marie (Cree)(Charlesbridge, 2003). Featuring full-color photographs, this nonfiction volume features two, strong overview introductions to contemporary Native America, followed by double-page spreads, each including a pronunciation guide and quick facts, on children from a regional cross-section of twenty-four Native Nations within U.S. borders as well as Native Hawaiians and urban Indians. The title also offers a color map, resources for further study (including a bibliography listing nonfiction for children, nonfiction for parents and educators, related magazines and newspapers, related organizations, and related Web sites). A glossary and index are included, too, along with a history of the book itself. An excellent read for children and adults, a must-read for social studies educators. Ages 8-up. CHILDREN OF NATIVE AMERICA TODAY: AN ACTIVITY AND RESOURCE GUIDE is also available. 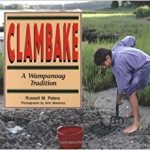 CLAMBAKE: A WAMPANOAG TRADITION (WE ARE STILL HERE: NATIVE AMERICANS TODAY) by Russell M. Peters (Wampanoag) with photographs by John Madama (Lerner, 1992). Steven Peters and his grandfather, Fast Turtle, host an appanaug, a clambake. Ages 5-up.

DRUMBEAT HEARTBEAT: A CELEBRATION OF POWWOW (WE ARE STILL HERE: NATIVE AMERICANS TODAY) written and photographed by Susan Braine (Ansiniboine, Fort Peck Reservation), illustrations by Carly Bordeau (Anishinabe, White Earth, Minnesota)(Lerner, 1995). A detailed overview of the powwow and its traditions. Ages 5-up.

FOUR SEASONS OF CORN: A WINNEBAGO TRADITION (WE ARE STILL HERE: NATIVE AMERICANS TODAY) by Sally M. Hunter (Ojibwe) with photographs by Joe Allen (Lerner, 1996). Russell, who lives in Minneapolis travels to a farm with his family to help plant and later harvest and enjoy corn. Includes recipe for Indian corn soup, glossaries. Ages 5-up.

GRANDCHILDREN OF THE LAKOTA by LaVera Rose (Rosebud Sioux) with photographs by Cheryl Walsh Bellville (Carolrhoda, 1998). A personal overview of her people by a talented author with a voice echoing oral tradition.Touches on Lakota diversity, history, economics, culture, government, families, children, education, lifestyles, and more. Includes a pronunciation guide. Ages 5-up. 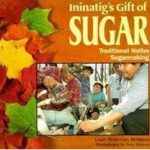 ININATIG’S GIFT OF SUGAR: TRADITIONAL NATIVE SUGARMAKING (WE ARE STILL HERE: NATIVE AMERICANS TODAY) by Laura Waterman Wittstock (Seneca) with photographs by Dale Kakkak (Menominee) and illustrations by Carly Bordeau (Anishinabe)(Lerner, 1993). Beginning with the Ojibwe story of Ininatig, “the man tree,” this book celebrates the processes of sugarmaking as it relates to Ojibwe heritage. Ages 5-up. 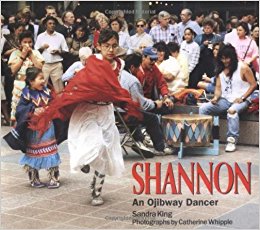 SHANNON, AN OJIBWAY DANCER (WE ARE STILL HERE: NATIVE AMERICANS TODAY) by Sandra King (Red Lake band of Ojibway), photographs by Catherine Whipple (Lakota)(Lerner, 1993). A look at everyday life and preparations for powwow with a focus on a young shawl dancer. Ages 5-up.

SONGS FROM THE LOOM: A NAVAJO GIRL LEARNS TO WEAVE (WE ARE STILL HERE: NATIVE AMERICANS TODAY) by Monty Roessel (Navajo)(Lerner, 1995). Although this list reflects many exquisitely photographed books, this one stands out. The subject matter lends itself to beauty, and the close look at tradition to warmth. Centered on photographer’s daughter Jaclyn. Ages 5-up. 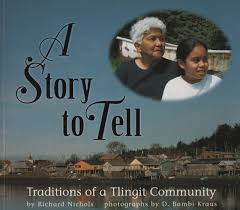 A STORY TO TELL: TRADITIONS OF A TLINGIT COMMUNITY (WE ARE STILL HERE: NATIVE AMERICANS TODAY) by Richard Nichols (Tewa Pueblo) with photographs by D. Bambi Kraus (Lerner, 1998). A grandmother in the village of Kate on Kupreanof Island, one of the traditional areas of the Tlingit people, tells stories of their culture to her granddaughter, Marissa, 11, from Seattle. Ages 5-up.