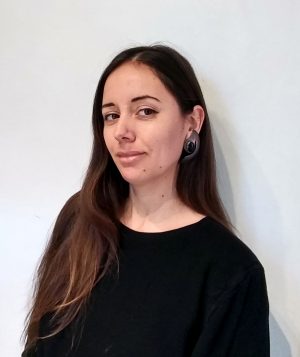 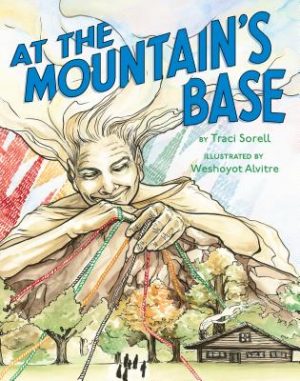 At the Mountain’s Base (Kokila, 2019) is illustrated by Weshoyot and written by Cherokee author Traci Sorell.

Weshoyot is Tongva (Los Angeles Basin) and is well established within the Indigenous art community.

A comic book artist and illustrator, she has contributed to numerous Eisner award-winning books, including the Umbrella Academy (Darkhorse Comics) and Little Nemo: Dream Another Dream (Locust Moon Press).

She has earned accolades for her work that visualize historical material, including Graphic Classics: Native American Classics (Eureka Productions) The Cattle Thief and most recently, the first volume of highly acclaimed Tales of the Mighty Code Talkers (Native Realities Press).

What about this manuscript called to you as an illustrator?

When I first received the manuscript, I was surprised at the brevity and power Traci Sorell managed to obtain in it. It’s written in a circular fashion which I really fell in love with.

I think the biggest challenge for me on this was taking an established style I have within comic book illustration and finding a way to translate that to a children’s book.

My art tends to be linear heavy with a lot of emphasis on line weight and black and white space. Color intimidates me. So I decided to try to choose a palette that not only referenced the feel of the weavings I was trying to pay tribute to, but to instill a kind of nostalgia through colors harkening back to the era of World War II. 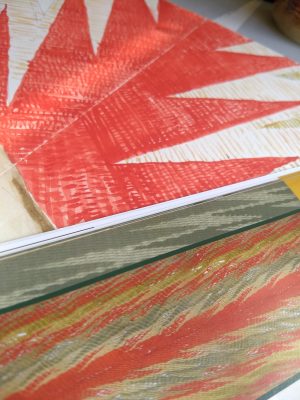 I settled on a variation of primary colors, and these became the foundation by allowing color to frame each illustration through the colored yarn strands, which serve as panel borders in a way, throughout the book.

Once I felt comfortable with this combination of comic book style art and more traditional illustration, I had more security in playing with layouts breaking panel borders and allowing the art to spread over multiple pages.

I did a lot of research into various forms of weaving with an emphasis on finger-weaving for this book. The traditional weaving patterns often referred to as “lightning bolts” inspired me.

I am a bit of new blood within the children’s-YA and picture book illustration community. My background is in comics, but many writers I have worked with have feet in both contemporary writing as well as pieces of work more geared to children and young adults.

This seems to be especially prevalent with Native American writers. So often we are trying to educate children as well as adults by offering unique perspectives to the publishing world at large.

It is a beautiful thing to see so much more space being given by major publishers, like Kokila, to under-represented minority writers within the Native community. I am grateful to have had such a warm reception with my first book and look forward to many more in the future.

I think the strength of my perspective in tackling the art for At the Mountain’s Base is being able to take something as quiet as spinning yarn, weaving, etc. and show that our traditional arts were often done while we socialized in groups, either at gatherings or within families.

My own tribe, the Tongva, were basket weavers. And there are so many steps to learn about the process, many which include songs, stories, and protocol methods to gathering and preparing supplies. Weaving has similar attributes, and while I don’t know the songs or stories associated with each step of finger weaving, for example, I can appreciate and try to show that it’s more than something people just sit down and do.

There is a whole lineage of ancestors behind it who have passed the knowledge on generation to generation, and it has outlived books or tutorials on the subject matter. It becomes ingrained in the makeup of who we are as Native people if we simply take the time to tap into it, and it heals a lot of emotional weight we carry by learning the arts and incorporating them into our daily lives.

Weshoyot Alvitre is an illustrator and comic book artist. She has a BA in fine art and studied illustration and animation. She is Tongva and Scottish.

She has contributed to many award-winning books including the Eisner award-winning Umbrella Academy (Darkhorse Comics) and Little Nemo: Dream Another Dream (Locust Moon press).

Her most recent projects include art for the graphic novel Ghost River (Native Realities Press/Library Company of Philadelphia), Moonshot volume 3 (AH Comics Inc.), and art direction on the educational video game, When Rivers Were Trails.