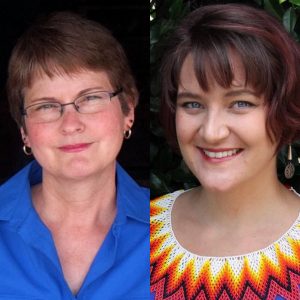 The story centers on a young Choctaw girl who creates art using clouds, and it has been well received since publication. It was a 2018 Oklahoma Book Award finalist, on the 2018-2019 First Nation Communities Read list of Recommended Indigenous Titles for Children, and named a picture book finalist for the 2017 Writers’ League of Texas Book Award.

In addition to being featured at the 2018 National Book Festival, Debbie Reese of American Indians in Children’s Literature included it in last fall’s School Library Journal article on picture books showcasing Native voices.

Sherri and Merisha, congratulations to you both! 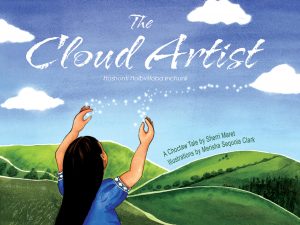 Let’s start with Sherri. How did you come to write The Cloud Artist?

I never set out to write a Choctaw story. It’s original and not a retold traditional story. I had previously written two books which are now out of print with my first publisher, but those were  not Choctaw related.

When I was in the middle of researching other publishers, I had a dream about a little girl who could paint with the clouds. Since I am part Choctaw, the main character is Choctaw.

I wrote The Cloud Artist and it was quickly picked up by The RoadRunner Press. The dream was very powerful and unforgettable. None of my other books came to me in a dream.

What was the timeline between spark and publication of The Cloud Artist?

I had the dream in May 2016 and a sit-down interview with the publisher at the National Book Festival that September.  The book was in my hands a year later.

Wow! That is fast! Did you have any challenges (personal, literary, logistical) in bringing the book to life?

I have to say this book was just meant to be. It happened fast.

That’s wonderful to hear. Did any special considerations/permissions come into play when framing a book around a Choctaw story?

Even though this is an original story, I was very concerned about not stepping on toes. The RoadRunner Press is located in Oklahoma City and specializes in Native American voices, so I was in very capable hands. I was paired with Merisha Sequoia Clark who is a Choctaw artist. We are both members of the Choctaw Nation.

The publisher contacted the tribe and coordinated getting Dora Wickson, a translator from the Choctaw Nation to provide the story in our language.

In addition to other book retailers, The Cloud Artist is sold at the Choctaw Museum, Choctaw Store, and Choctaw headquarters. I could not be happier about how everything came together.

The Choctaws were instrumental in WWI and using the language as the first code talkers.  I knew I wanted that reference in the story. The Trail of Tears should never be forgotten and I wanted to include that also.

When the publisher told me she wanted a stickball game included, I thought that would be an impossible illustration. Merisha did an amazing job of drawing the cultural and historic references in the story. She looked at traditional clothing and WWI military uniforms to keep it accurately portrayed.

What do you think Merisha’s art brings to the story?

She brought vision. Illustrating a book is challenging enough and cloud art would be even more difficult. She had the vision to make it all work.

What other stories do you have in the works?

The Magician, a non-Native story also from RoadRunner Press, will be released this July.  Pamela Behrend, the illustrator, and I both live in Pennsylvania. I am working on other books as well.

What first inspired you to illustrate for young readers?

When I was a home-study student, I did a research paper on the importance of reading to children. I was also working as a nanny at the time and I loved all the illustrations. When I entered high school, my art classes were by far my favorite. 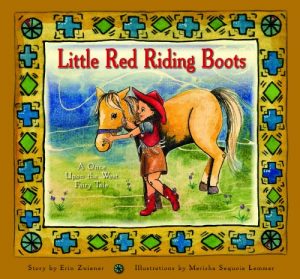 Please describe your illustration apprenticeship. How did you take your art from a beginner level to publishable? How has your style evolved over time?

While in high school I got the opportunity to attend the Oxbow School, a visual art based semester program. While there I found the Savannah College of Art and Design, they offered a major in Illustration with classes in children’s books.

After completing my BFA in Illustration, I managed to get published in magazines and a few gallery shows and about five self-published books before getting my first book deal with The RoadRunner Press. That book was Little Red Riding Boots, written by Erin Zwiener, and published in 2013.

What about The Cloud Artist called to you as an illustrator?

The first challenge was to illustrate the same character aging through the book.

The next challenge was to illustrate clouds as animals and make them look realistic as clouds.

I think the main challenge was when the book format changed at the end of the process. That changed the way my illustrations were viewed, originally they were to be full spread with text overlay.

The research part was so much fun. I pulled from my family images and images from the time period. 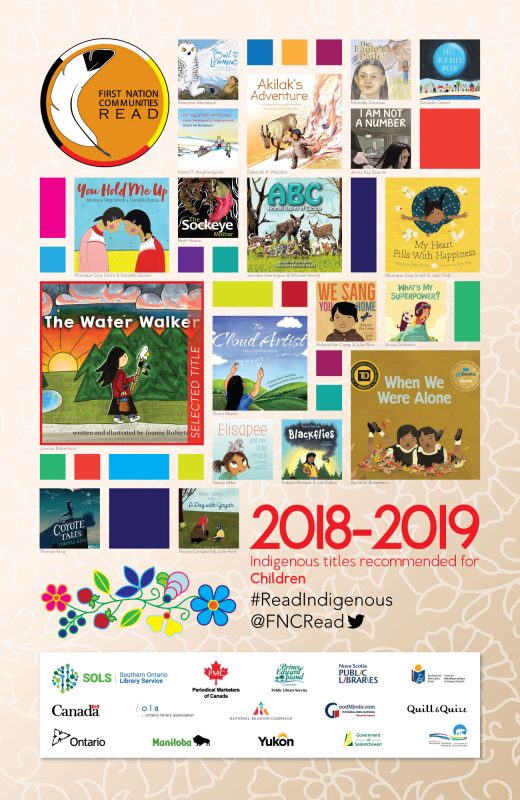 What advice do you have for other Native artists who want to work as children’s book illustrators?

Enjoy what you are doing and just keep creating. Connect with publishers who are interested in publishing Native works.

No books for a joint venture yet, but we hope we get to work together again. Merisha lives in California and Sherri lives in Pennsylvania.

Hopefully we can meet at an Oklahoma Choctaw event some day! A month before our book was released, we found out we were distant cousins!

Sherri Maret is a citizen of the Choctaw Nation whose maternal grandparents lived in McAlester, Oklahoma. She was born in Greenville, Texas and lived in numerous places across Texas before moving to New Mexico. She now lives in Pennsylvania. Previously, she worked as a teacher and then a librarian, but focuses her time on being a full-time author.

Born in 1987 and raised under the redwoods in Sonoma County, California, Merisha Sequoia Clark emerged from the mossy forest floor and her huge, loving family with a belief that she could create beautiful things, change the world and inspire people to love. Her paintings and illustrations are infused with a bold optimism and tender intimacy with the world around her.