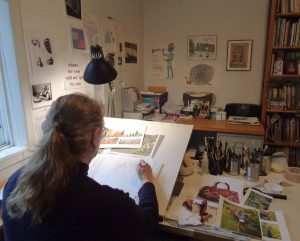 Back in 2011, Cynsations shared Ellen Beier‘s research and illustration process working on a historical picture book manuscript. Since then, the book’s journey has taken a few interesting twists and turns.

Readers fascinated by Lindsey Lane‘s Cynsations series on Books Going Out of Print may be especially intrigued by this new stage of the book’s journey.

Much fanfare accompanied the original release of The Christmas Coat: Memories of my Sioux Childhood, written by Virginia Driving Hawk Sneve. The book, describing Sneve’s twelfth Christmas on the Rosebud reservation in South Dakota (1945), won the Smithsonian Magazine Best Children’s Book Award 2011 and the American Indian Youth Literature Award in Picture Books, and received a star from Kirkus Reviews.

An NPR Tell Me More episode included Sneve’s book in “Great Books to Give your Little Ones,” and positive reviews appeared on sites such as Dr. Debbie Reese’s American Indians In Children’s Literature and in a Native American Netroots/Daily Kos diary.

So it was very disappointing when, only five years into the book’s first printing, the author and I were informed that it would go out of print. Its original publishing house had been sold to a different firm and the book was not picked up.

Meanwhile, with the development of the tablet reader, the ebook had emerged as a popular and viable alternative book format. A number of my illustrator colleagues were stretching their digital skills and producing ebook versions of their picture books—out-of-print titles or original titles—for sale on Amazon.

Some picture books were even being redesigned as apps, which encouraged a new kind of interactivity such as that of the outstanding Alice in Wonderland.

Excited by these new developments in book publishing, I suggested to Virginia that we both obtain our reversion rights letters from the publisher without delay.

While this is covered by a basic clause of the book-publishing contract, it is a process that can take time. Fortunately, we soon received our letters in the mail—and we were both organized enough not to lose track of them!

My intention had been to try my hand at building an ebook from the text and the art that we had produced for the original edition, but immediate deadlines took priority. The ebook trend waxed and somewhat waned, as did the demand for book apps.

Fortunately, Virginia approached the South Dakota Historical Society Press about reprinting the book. They agreed and vigorously promoted the book regionally, including presentations and book signings by Virginia.

Were there any technology/logistical challenges in making that happen?

Legally, the only restriction was that in the new edition South Dakota Historical Society Press could not use the original fonts for the interior text or cover/title pages. However we were able to use my archival scans of the original art, and the process went smoothly.

I love the title design that was created for the cover, and the overall printing of the book is excellent. Virginia added an Author’s Note which offers a new window into her personal story and her generous nature.

Has your illustration process changed over time? If so, what role does technology play in that change?

I have always painted with watercolor, adding colored pencil, pastel, gouache or acrylic ink at times.

I still love the flow of paint on paper. I use Photoshop during the sketch phase to move items around and resize, and then again at the end to scan art and make adjustments. More recently I have experimented with printmaking—linocut block print and intaglio.

You’ve illustrated books that are considered classics. How do you approach a project like that when readers (especially editors and art directors) already have their own ideas about the characters’ appearances?

With every book I read the original text—in the case of Les Misérables I also listened to the entire 51-CD set of recordings of Victor Hugo’s narrative translated into English. I purposely did not watch the newer films of Les Misérables because I wanted my take to derive entirely from the words.

For Anne of Green Gables by L.M. Montgomery (L.C. Page & Co., 1908) I did watch all the films beginning with the 1934 black and white film up to the latest version on Netflix. The publisher in this case wanted the images of Anne and other characters to be consistent with those in the public imagination.

I noticed those projects were for Asian publishers. How did you make those connections? Were there any logistical or other challenges in bringing the images to life?

Les Misérables was published in an abridged version for Little Fox, South Korea which produces online classics for children in Asia.

They found my portfolio on the SCBWI gallery and released the illustrations serially by chapters over many months, a total of 270 paintings. I enjoyed this format that resembles graphic novel or comic frames.

Anne of Green Gables will be published in a 350-page translation of Lucy Maud Montgomery’s original novel, by Guomai, Beijing. The publisher saw an earlier picture book version of Anne that I had illustrated (written by M.C. Helldorfer) and located my website. I have completed 23 interior illustrations in full color, and the book will be published in late summer.

A few years ago, on a visit to Central Asia, where my son was working, I discovered petroglyphs on the steppe—and that began my deep dive research into prehistoric art and more travel. Sketches can be seen on my Instagram page: scroll down to 2018-19.

Currently, I am participating in the 12×12 Picture Book Challenge to turn my stories—including one based on recent research—into submittable drafts.

What advice do you have for beginning children’s illustrators?

My advice is: carry a sketchbook. Try to turn every chance of travel into a sketching trip, every event into a sketching session, every day into an opportunity to play with pencils, surfaces, shapes, and color. Draw what you see in front of you.

If you are working on your portfolio, write down a favorite story and illustrate it yourself in five pieces. Then do it again.

If you feel like you are stumbling, work it out in your sketchbook. The sketchbook is for practice.

I hope you will enjoy every opportunity to draw. 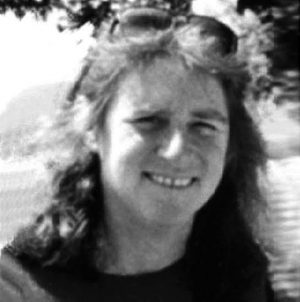 Coloring pages and recipes from The Christmas Coat are available for download.

Ellen Beier grew up near New York City. She now lives in Corvallis, Oregon, and has illustrated numerous books for children, including The Blue Hill Meadows written by Cynthia Rylant (Houghton Mifflin Harcourt, 1994). Ellen is a long-term member of the Picture Book Artists Association and the Society for Children’s Book Writers and Illustrators.

Gayleen Rabakukk holds an MFA in Writing for Children and Young Adults from Vermont College and is a former Writing Barn Fellow. She’s worked with Cynthia Leitich Smith as  Cynsations intern since 2016 and also serves as assistant regional advisor for Austin SCBWI. Gayleen is represented by Andrea Cascardi of Transatlantic Literary Agency.