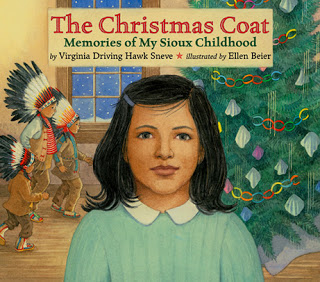 When I first read Virginia Driving Hawk Sneve’s picture book manuscript, The Christmas Coat: Memories of My Sioux Childhood (Holiday House, 2011, reissued South Dakota Historical Society Press, 2018), I was taken back in time to the South Dakotan snow-covered prairie of the 1940s.

I could hear the wind in the hills, see smoke rising from scattered houses on the reservation.

And in my imagination I saw Virginia struggling against the cold, her bare wrists exposed in her tight, too-small coat.

I felt her aching for a coat that fit, her brother’s longing for boots, the children’s unchecked delight at the arrival of “Theast” boxes–filled with gifts of donated clothing–as they simultaneously counted down the days to Christmas.

But as I read and re-read the story, in preparation for making sketches, my mind kept playing tricks on me. From the ’40s I periodically traveled forward to my own childhood several decades later, to the suburban New York City neighborhood where I was raised, where most of our parents were German immigrants, many of them Holocaust survivors living life in a new world–not rich, but having enough of what was needed, clothes that fit and ample room for hope.

This was America, was it not –the promised land of opportunity? So what of this Native American community, the first peoples, struggling so steadfastly against the tide of poverty?

I immersed myself then in learning about the history of the Lakota Sioux, from the voices of those who were there. I read books such as My People the Sioux by Luther Standing Bear (Bison Books, 2006) and Keeping Heart on Pine Ridge by Vic Glover (Native Voices, 2004). 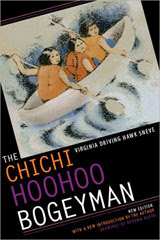 I read everything written by Virginia, her picture books, The Chichi Hoohoo Bogeyman (University of Nebraska Press, 2008), her history of the Sioux Episcopal priests, and the beautiful account of her family’s history through the stories of her grandmothers, mother, and herself, Completing the Circle (University of Nebraska Press, 1998). From that book I came to understand the complicated mixture of Native American custom and Christian religion, of devastating loss as well as embracing family ties, that nurtured Virginia’s childhood in South Dakota in the 20th century.

I traveled through South Dakota using Google maps and images. . . and found a blog written by summer-students volunteering in the author’s home town, with posted photos of Virginia’s school–the very one she attended as a child. I studied the effects of dusk-light upon snow, the patterns of the star quilt, the faces of Sioux heroes.

Using my notes, history books, online sources and photos provided by Virginia, I painted the illustrations for The Christmas Coat with as much detail as possible, to bring her story fully to life.

Having gathered more material than could fit in the 32-page book, I set up a blog/website celebrating The Christmas Coat with recipes, coloring pages, meet the author and illustrator, and the making of the book (with more activities to come).

I hope you will love The Christmas Coat, a story of longing, patience, spirituality and family, by a master storyteller, and come visit us on the blog.

Virginia Driving Hawk Sneve was honored with the National Humanities Medal in 2000 for her children’s books featuring Native American characters.  She is an enrolled member of the Rosebud Sioux Tribe.