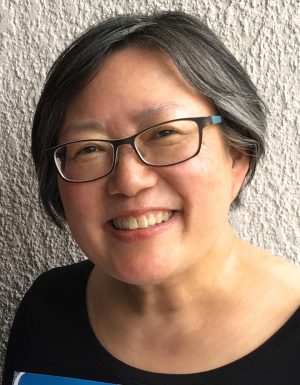 It’s the start of a new year—the school year—the real new year to many of us.

Are you ready for a vacation already?

If you are a writer, consider this: Sign up this month for a conference, something—anything—having to do with books. Why?

Blogs like this one can be incredibly inspiring and easy to read in the comfort of your kitchen or office, but there is something special about spending time at a conference, soaking up the energy in the room, and connecting with people who can help you make your goals happen.

When we are sitting elbow-to-elbow with a group of like-minded people, we find ourselves in a place where transformation can happen more easily than it can in a routine and isolated setting.

When we’re talking face-to-face with a future mentor or collaborator, we are more attuned to new approaches to our work. This is why many people prefer to exercise in a gym or yoga studio instead of at home.

Think of a conference as a yoga retreat for your writing career.

I’ll share links for some favorite conferences below, but first, here’s a little background on why I love them.

Immediately after deciding that I wanted to become a children’s author, I started attending SCBWI conferences.

The SCBWI gatherings were enormously beneficial to my development as a writer. As my focus on school visits grew, I knew I needed to branch out and connect with more educators, so I started attending a few additional conferences each year, joining together with professors and other authors to submit proposals.

I spoke to booksellers at ABA, to elementary teachers at IRA (now ILA), and to middle school and high school teachers at NCTE. I became very active in NCTE, so much that I was tapped for a spot on the NCTE Commission on Literature.

This volunteer work on committees gave me meaningful interactions with literacy leaders and taught me to see books through the eyes of an educator. I now understood with greater clarity why certain manuscripts were rejected, and why my most popular books sold. I started writing—and thinking—more empathetically.

Volunteering with literacy groups is the best thing I’ve ever done for my career.

And this volunteer identity of mine became soul-saving as huge changes impacted my career. My two main editors, Margaret K. McElderry (Simon & Schuster) and Frances Foster (Farrar, Straus & Giroux), died—and I soon found half my books out of print.

Having a book go out of print can feel, for an author, like a demotion; or, at risk of being melodramatic, each loss felt to me like the death of a beloved pet. I was able to take consolation in the fact that my remaining books were being recommended and used in classrooms by some of the most influential K-12 teachers, librarians, and children’s literature professors in the nation—people I had come to know through my committee work. Half of my books were OP, but the ones that survived were thriving.

Then it hit me: Maybe these books were alive because, while working on committees and volunteering at conferences, I had kept my name (and face) out there in the world of educators. The corollary to the proverb “out of sight, out of mind” is the idiom “see and be seen.”

When I first got started in our business and spent half my time on promotion, my grandfather joked, “You have to sell ‘em one by one?”

Now I know that the answer is definitely Yes—but that “selling” my books might be as simple as showing up at a conference luncheon and chatting with an old friend.

What conferences should you go to?

Let me answer that by disclosing a bias: My current favorite volunteer work is for USBBY, a group that supports global literature and contributes to the Children in Crisis work of our international parent organization, the International Board on Books for Young People.

Every two years (odd-numbered years), USBBY hosts the IBBY Regional conference; IBBY members from all over the world come. 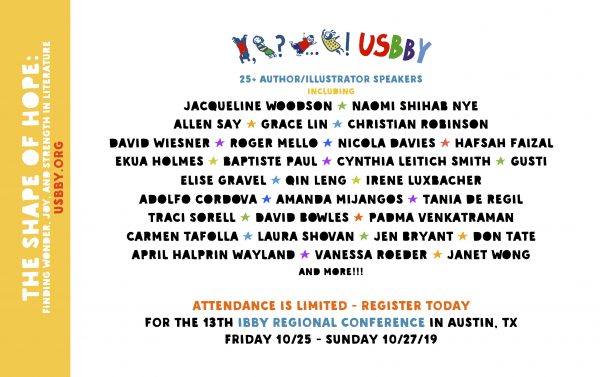 Every other year (even-numbered years), the IBBY Congress is held somewhere in the world other than the U.S.; in 2018 it was in Athens, Greece, and in 2020 it will be in Moscow, Russia.

We in the U.S. are the leaders of the children’s book industry, but there is a whole world out there celebrating literature—and while they are very familiar with our books and awards and festivals, most of us have never heard of theirs. Have you heard of the Nami Concours in Korea? Neither had I, before I became active in USBBY.

I’ve put more than a hundred hours into helping to plan this year’s IBBY Regional Conference, hosted by USBBY and taking place in Austin, Texas from Oct. 25 to Oct. 27.

We’ll have more than 25 featured speakers, including this blog’s own Cynthia Leitich Smith.  Naomi Shihab Nye and Jacqueline Woodson will converse in our First General Session, followed by a Local Author Showcase hosted by Gayleen Rabukukk and University of Texas professor Denise Davila. Read more about the conference. (And register!!!) 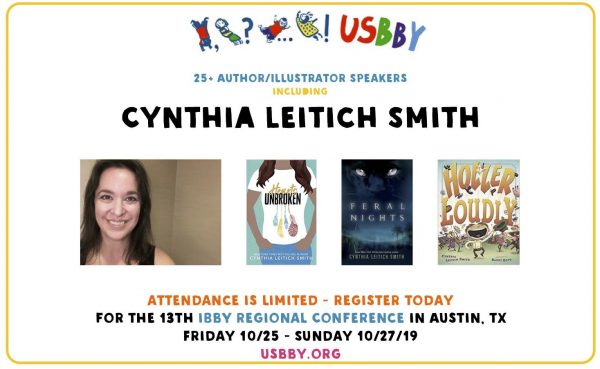 Here are some other conferences and festivals that have been helpful to my career and enriching to me personally:

—the Teachers College Reading & Writing Project conferences in NY (various conferences are held year round, such as “A Social Justice Saturday”)

—don’t forget the day-long events organized by state and local chapters of ILA, NCTE, and of course, SCBWI!

The events that I’ve listed here are small events—typically gatherings of 300 or so people. The smaller the conference, the easier it is to connect with fellow attendees.

If you’re at a large conference like NCTE, look for smaller experiences such as the Children’s Literature Assembly’s Sunday breakfast or the National Writing Project Sunday brunch.

If you’re an author, bring small items tied into the theme of your book for everyone seated at your table—and you’ll have an instant audience of ten very curious fans!

If you’re an educator, bring photos of your students and show them off proudly to get your conference-mates brainstorming ways to help your students learn.

A final word: some of you might be thinking, yes, this would be nice to do—if I had the money for it. If this is your situation, keep it local so you won’t have travel costs; or go to a conference within a day’s drive, where you have friends and family you can stay with. Make a conference trip your vacation for this year.

Starting the new year with a vacation? Sounds like a winning plan! 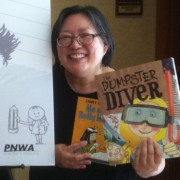 Janet Wong is a graduate of Yale Law School and a former lawyer who switched careers to become a children’s author. Her dramatic career change has been featured on The Oprah Winfrey Show, CNN’s Paula Zahn Show, and Radical Sabbatical.

With Sylvia Vardell, Wong is the co-founder of Pomelo Books.