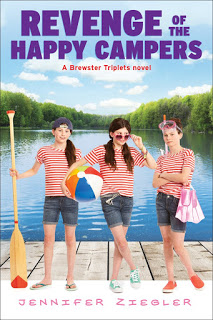 Today we welcome author Jennifer Ziegler to discuss the third book in her MG series featuring the Brewster triplets, Revenge of the Happy Campers (Scholastic, 2017). From the promotional copy:

Dawn, Darby, and Delaney Brewster are always up for an adventure, whether it’s ruining a wedding (for good reasons!) or turning a Christmas pageant tradition on its head. But now they’re about to go where they’ve never gone before: Camping!

They’re spending spring break with their beloved Aunt Jane at the same campground she and their mom used to go to as kids. But the first morning there, they run into a trio of boys, and one starts bragging about his plan to become the President of the United States. Clearly this is Dawn’s destiny, and the two, well, don’t become fast friends.

Between the fierce competition to see who’s the best leader and some unfortunate encounters with nature, this camping thing is sure looking like a bad idea. And when their final contest puts them in real danger, it might take six future leaders of the country to keep this from being the worst trip in history.

Camp can be such an exciting adventure. Did your childhood experiences inspire Revenge of the Happy Campers?

Definitely! I never went to “away camp,” but I had many outdoor adventures with my dad over the years, since camping and fishing are pretty much his favorite things to do.

Pappy Camp might not fit the standard definition of fun for a modern young person, but it was always a great experience.

I remember very primitive lodgings, fishing mishaps, bad weather, and critters visiting in the night. But I also remember the beautiful scenery, the sightings of wildlife, the thrill of reeling in a big fish, and how great food tastes when it’s cooked in the open air. 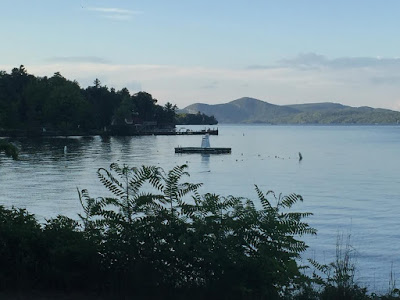 Mostly, though, I recall that sense of triumph. Every time I went on a camping trip, I came away feeling bigger, stronger, and more capable.

This is the third book in the Brewster triplets series. Were there challenges in keeping everything that happened in previous books straight, or by now do you feel like you know the girls as well as your own family? (and can readers start with the third book without feeling lost?)

Right before I started work on Happy Campers, I reread the first two books to remind myself of the pacing and rhythm and make sure I kept certain details straight.

I still had the characters’ voices in my head, so that part wasn’t very difficult. In fact, it’s going to take some serious effort to get their voices out of my head when I write a non-Brewster book.

The girls do seem like family to me now. I talk about them as if they really exist and often wonder how they’d react to world events. I find myself making remarks like, “Oh, the Brewsters would hate this,” or I’ll describe an actual person as being “like Delaney.”

It’s a magnificent feeling — and also a little alarming — when people you’ve imagined seem to have come to life.

I do think readers could start with the third book. It’s a complete story that doesn’t build off of the previous books’ plots, and background is given when needed.

Of course, those who’ve read the first two novels would recognize certain references and understand characters and relationships from the get-go.

Will there be more Brewster triplet books?

There will be! I’m currently writing Book Four in the series. I can’t say too much about it yet, except that the girls are twelve now and facing some new challenges — at home and elsewhere. I’m hoping it will be out fall of 2018.

The first inspiration? Probably the relationship I had with reading while growing up.

I think when you are young, the bonds you have with favorite stories and characters are stronger and more special than the ones you form as an adult. You’re experiencing ideas and feelings for the very first time and learning about yourself and the world. So I don’t think it’s an exaggeration to say these beloved stories can help shape you into the person you become — or help you tap into parts of yourself you never realized were there.

The tales that enchanted me early in life (Judy Blume novels, Beverly Cleary’s Ramona series, the first Star Wars trilogy) wove into the matrix that is me. Their worlds will always seem like cherished places I’ve visited, and their characters will always feel like old friends.

It’s similar to love. No … it is love. That’s what I recognized as a young reader. And I came to believe that if I could create stories that allowed young people to recognize themselves and understand life a little better, it wouldn’t just be fun, it would also be an important, almost sacred calling.

Competition is an underlying theme in Revenge of the Happy Campers. What advice do you have for writers about competition?

I feel strongly that with writing, the real competition has to be with yourself.

There do exist official literary competitions that result in fancy dinners and your name etched on a plaque — and don’t get me wrong, such honors feel fantastic  — but they can’t be what motivates you.

What really matters is pushing yourself to do better in some way and succeeding. If, by the time you’ve finished a project, you have grown as a writer — that’s a win.

Perhaps you’ve honed your process or attempted a new style or genre. Maybe you’ve identified a bad habit that you can now avoid or learned a trick that can help you tackle writer’s block.

Such achievements won’t get you a shiny trophy (unless you give yourself one, and that’s okay), but they’re the stuff that will keep you fueled and focused for the next writing challenge. It’s proof that you can handle the demands of this calling.

Confidence. Faith in your abilities. Belief that you can overcome the fear and doubt (which never go away). I think those are the real rewards that can change you, and your craft, for the better.

Reviewer Sharyn Vane of the Austin American-Statesman wrote, “Ziegler’s young democratic-process aficionados are as appealing as ever, brimming with confidence and problem-solving savvy. They’re empathetic enough to notice that their aunt is saddened by the state of the campground she remembers visiting each summer….full of real-world adventures, both wise and witty.”

Like the Brewster triplets, Jennifer Ziegler is a native Texan and a lover of family, history, barbecue, and loyal dogs.

Although she only has one sister, she does know what it is like to have four kids living in the same house.

She is the author of several books for young people, including Sass & Serendipity (Delacorte, 2011), and How Not to Be Popular (Delacorte, 2008). Jennifer lives in Austin, Texas with her husband, author Chris Barton, and their four children.