I tweeted about the book, in hopes Kimmel might invite Gwendolyn to be a guest on his show.

Since I have a little more pull with the Cynsations blog, I interviewed Gwendolyn about the story behind the book, which is also pretty amazing.

How did you get the idea to write about Vivien Thomas?


One night in 2010, Anna Myers (author, regional advisor for SCBWI Oklahoma and friend of 20 years) texted me, “Are you up?” I told her I was, so she called me.
Her voice had a quality that struck my heart – I worried she was about to tell me someone had died.
Instead she said, “I just saw a movie about the man who saved Little Will’s life (Anna’s grandson), and Gwen, you’ve got to write a book about him.”
The movie was Something the Lord Made, about Vivien Thomas, the man who developed the surgical procedure to repair Tetralogy of Fallot, a four-part heart defect. Vivien focused on one defect. He found a solution to the heart pumping oxygen-poor blood throughout the body.

I thought, she’s just out of her mind. I can’t write well enough to tell that story.

Anna sent me the DVD and I watched it. I kept thinking, “How did I not know this story?”

Vivien Thomas is the perfect inspiration to show what you can do once you’ve made your mind up. His life is a beautiful story of setting goals and working to figure things out.

This seems like a very complex subject. Do you have a medical background?


I took biology in college, but that was years ago, and we didn’t learn much about medical science. Basically, I had to learn it all.

Vivien Thomas himself inspired me to tackle the project. He only had a high school education and he didn’t know anything about working in a medical research lab. When Dr. Blalock interviewed him for the job, he asked questions about all the equipment and how it was used. Dr. Blalock recognized his sharp inquisitive mind and hired him as his research assistant.

I was a teacher for many years, mostly I taught seventh grade math, which by the way was my most
difficult year as a student. My teacher was young and enthusiastic, but I didn’t understand much of what she told us. When I was teaching and a student would tell me they didn’t understand, I would take a step back and remember how I felt that year, then try to find a different way to explain it.

That happens a lot with writing too. Sometimes a story may not be working and we have to step back and think about it in a different way. I’m always looking for a different approach to write something so young readers will understand and enjoy reading it.

Tell us about your research and what you did to make sure you got the story right.


Vivien Thomas wrote an autobiography that included lots of details about his research. Dr. Blalock advised him to write everything down – every step of an experiment. He took that advice to heart, and that helped me a lot. 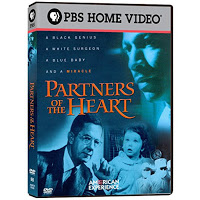 PBS did a documentary on the procedure and included Vivien Thomas’ work.

I contacted doctors and residents who worked with him and interviewed them. They all said he was a generous person who really took the time to explain things. If you didn’t understand the first time, he would find a different way to frame it to make sure it was clear.

I also talked to his nephew who is now an orthopedic doctor with a sports team in Florida. He didn’t know what his uncle did until he attended Johns Hopkins as a medical student and saw his uncle’s picture on the wall.

Whenever the nephew had visited Baltimore in the summers, Vivien just told the kids he worked with dogs. He was humble about his accomplishments.

Vivien did an interview in the 1980s, I listened to the recording, but the sound quality made it difficult to hear well. Fortunately there was a transcript.

I really wish I’d had the chance to interview him myself.

I also read journals and articles written during his lifetime to get a sense of the challenges he faced. Both Nashville and Baltimore were segregated cities at the time. I was doing a school visit recently and we talked about his hardships and how he didn’t get credit for his accomplishments. The students were very vocal about how unfair that was, so that was very good to hear.

I watched a YouTube video done by a doctor at the Mayo clinic explaining the procedure. It was a video he showed patients and families, so it was very understandable.

I included the video in the resource section and when I was checking to make sure the link worked, I discovered the doctor had left the Mayo Clinic – and moved to Children’s Hospital in Oklahoma City.

I emailed him, not really expecting to hear back, but he responded and ended up reading the book to make sure the science was correct. I dedicated the book to him and sent him a copy. He said he was happy to share it with his kids so they would understand what he does at work.

That’s a great bit of serendipity. Did you find that one bit of research led you to the next?


Sometimes the path led me astray. There were so many stories I wanted to include, but I knew I couldn’t include them all.

I really wanted it to be accessible to upper elementary/lower middle school students and wanted them to see his determination and his ability to follow through.

Tell me about shaping the story.

The manuscript was about 2,500 words to start with and it ended up being about 1,100. I did several rounds of revision with the editor to cut it down. It’s a challenge to eliminate words and still keep the heart of the story.

What advice do you have for other writers?

My advice is to read the books being published now in the genre you’re trying to write. A lot of times I get a manuscript from another writer and they tell me it’s a picture book or a chapter book, but then when I read it, it’s not that at all.

Were there model books that helped you? 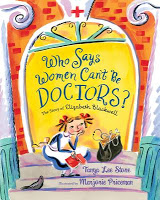 Author Barbara Lowell sent me Who Says Women Can’t Be Doctors: The Story of Elizabeth Blackwell by Tanya Lee Stone, illustrated by Marjorie Priceman (Henry Holt, 2013). It’s a different style, but it was interesting to see what information she included.

I read a lot of picture book biographies.

I lived at the library and read at least one or two every week (52 weeks x 5 years = 260 at least). Writing friends also loaned me books.

I didn’t limit myself to science books. I was reading them for writing techniques too.

Blizzard: The Storm That Changed America (Scholastic, 2006) by Jim Murphy. I love the way he can write nonfiction and make you feel like it’s fiction.

A couple of how-to books I found helpful were Yes! You Can Learn to Write Successful Children’s Books by Nancy I. Sanders (Createspace, 2013) and Anatomy of Nonfiction (Institute for Writers) by Margery Facklam and Peggy Thomas. (See Cynsations post about Anatomy of Nonfiction.) 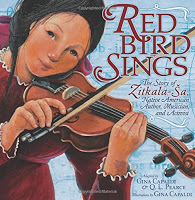 Other picture book biographies I love (and this list doesn’t include the ones I checked out of the library!): 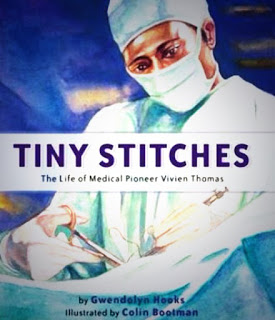 Booklist gave Tiny Stitches a starred review. Peek:”(Vivien Thomas’) life and work are vivid in the pages of this picture book biography, in which Hooks details how his youthful work in fine carpentry, paired with his desire to become a doctor, propelled Thomas in his pursuit of his goals.”

Gwendolyn Hudson Hooks was born in Savannah, Georgia. Her father was in the Air Force, so Gwen and her family moved a lot when she was a child. Her first stop in every new city was the local library where she got her new library card.

She is the author of 20 books for children, including the Pet Club Series from Capstone. Gwen now lives in Oklahoma City, Oklahoma, with her husband and their three children.