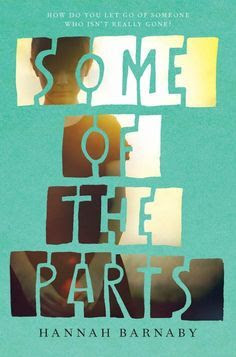 In early 1999, I was a graduate student in the children’s literature program at Simmons College in Boston.

I had a work study job at the Simmons social work school, mailing out applications and entering information into a computer, and that’s where I was on the morning of February 16th—sitting at someone else’s desk, collating papers—when the phone rang.

I ignored it. It wasn’t my phone.

It stopped, and rang again, and stopped, and finally the receptionist came in and said, “You need to answer that. It’s for you.”

It was my father, and he was crying, and he told me that my brother Jesse was dead.

I was twenty-four years old. My brother was not even twenty-one.

There is no good reason for why it has taken me seventeen years to write Some of the Parts (Knopf, 2016), the story of Tallie McGovern, who is sixteen and has lost her big brother and feels that she has no right to still be alive. There is no good reason, except that I was afraid to write Tallie’s story because I knew that it would bring that day in 1999 rushing back like an unstoppable river. 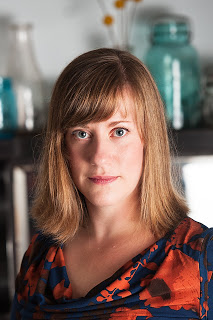 And it did. I remembered things that I was sure I’d forgotten, like the single red mitten on top of a fence that I saw as I walked to the T station after that phone call.

Like the first thing I ate after I found out: a tuna sandwich.

Like the ride home to Albany from Boston that night, like what my mother looked like when I saw her at the door, like the guilt and the aching sadness of an empty chair in our kitchen.

I am often asked about the process of writing for teen readers, about accessing my “inner teen,” about telling stories that they can relate to. But the truth is that the experiences which truly shape us—loss and gain, trauma and victory, love and devastation—refuse to be forgotten.

We have only to glance back at them and they reanimate, like a movie unpaused, and they start to talk and move and sing.

Tallie’s story unfolded that way. I expected that writing Some of the Parts would be difficult, and it was. Nate is not my brother, and Tallie is not me, but much of their story is taken from my own and that is how I wrote this book—not just for teens, but for everyone who has lost somebody important.

I didn’t expect that it would heal me all over again. But it did. 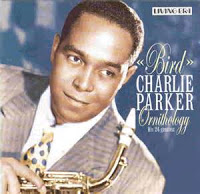 I spoke to my brother’s friends from high school and college. I listened to his favorite music (Charlie Parker). I read his favorite writers (James Michener and William Faulkner). I ate his favorite ice cream (vanilla). I spent time with him, the way that Tallie spends time with Nate. I walked through every part of her story right along with her and when she was finally safe again, I knew that I was, too.

I don’t know if Jesse was an organ donor. He died in a fire and most of his personal belongings were damaged or lost, including his driver’s license. But he cared deeply about his family and his friends and the world we lived in with him, and in that way, he lives on.

As for me: I have a little heart on the bottom of my driver’s license. I am very careful crossing the street, and I always wear my helmet.

I have a little boy now. When Some of the Parts is published—on the seventeenth anniversary of my brother Jesse’s death—my son will be nearly six. He loves vanilla ice cream, and music, and reading. He has brown hair and dark eyes, like the uncle he will never meet.

Before I wrote this book, I didn’t talk about my brother with my children very often, because I thought it would be too sad, and because I didn’t know what tell them. Writing Some of the Parts gave me the words to say, and I hope those words are taken by readers and used in conversations about loss of all kinds.

Sometimes bad things happen, and we are not the same when they are over.

This is the line from Some of the Parts that sums it all up for me. When we lose someone, their empty space doesn’t get filled up. It isn’t like digging a hole in the sand and watching the hole disappear when the tide comes in. It’s more like this: 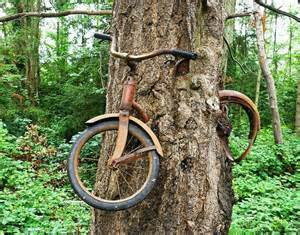 We grow around the memory of the people we’ve lost, and we carry them with us. And if we’re feeling very brave one day, we write about them.

Hannah Barnaby is the author of Wonder Show (Houghton Mifflin Harcourt, 2013), a Morris Award finalist; Some of the Parts; and the upcoming picture books Bad Guy and Garcia & Colette. She is a proud graduate of Vermont College of Fine Arts and a former children’s book editor and bookseller.

Hannah lives in Charlottesville, VA with her family and teaches creative writing to anyone who will listen. Find her on Twitter @hannahrbarnaby.

Learn more about Hannah’s upcoming Write for Your Life workshop at The Writing Barn in Austin. 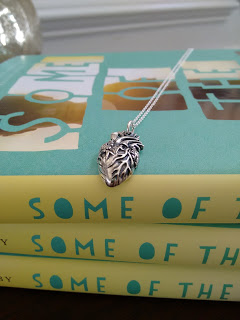 Enter to win a signed copy of Some of the Parts by Hannah Barnaby (Knopf, 2016) and a sterling silver heart necklace. Author sponsored. Eligibility: U.S. only.

5 thoughts on “Guest Post & Giveaway: Hannah Barnaby on Writing for My Life: How I Dug into My Past for Fiction”