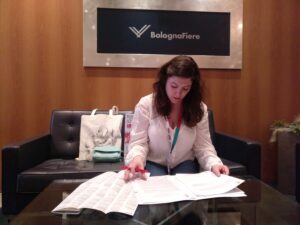 Today I’m talking with Ale Díaz Bouza, an illustrator who also serves as the Regional Advisor for the Society of Children’s Book Writers and Illustrators chapter in Spain, about publishing for young readers there.

What is the children’s publishing market like in Spain? How popular are children’s books there?

Despite being considered “the little sister of literature,” in Spain, surprisingly, the book sector is holding up economically in times of crisis thanks to children’s publications. There are more and more bookstores specializing in children’s literature or larger spaces in general bookstores that take greater care in the staging of illustrated books and albums. It is also true that there are important reading plans in schools, as I imagine happens in many countries. All of these factors together increase demand and therefore the need to create.

I know you’ve visited international conferences and book fairs, which can give you a chance to see what kinds of books are popular in other countries. What are your thoughts about the similarities or differences in the kinds of books that are published for children in Spain, versus other countries?

Well, my main reference when talking about fairs is without a doubt the Bologna Children’s Book Fair in Italy. I have been going to Bologna for years and I have had the experience of going both on my own and to represent SCBWI at the organization’s stand with my fellow association members. (See a Cynsations interview featuring Ale at Bologna 2018).

Without a doubt, the fair is a place in which book trends are highly appreciated: in the themes, illustrations, etc. And therefore, inevitably, the desire to emulate the great literary phenomena between countries is also noteworthy. The purchase and sale of rights is the fair’s main objective.

So, despite being an event where authors and illustrators have great opportunities to show and sell their original projects, another purpose in attending is to take note of the trends and bring those ideas back home to Spain. The big publishers focus more on this, while the smaller ones prefer more authentic and original stories, even if they are not as commercial.

Are most of the children’s books published in Spain created in Spain? How often are books that have been translated from other languages available in Spain?

I don’t know the percentages, but there are a lot of books in Spain that are translations, of course.

Comic illustration projects come from France and great literary references come from England. But Spain has a lot of its homegrown creations in children’s lit. We have a very rich, varied and high-quality market.

In Spain there are many literary prizes, not only in Spanish but also in the co-official languages: Galician, Basque, Catalan, etc.

How are books brought to market in Spain? Are creators represented by agents? Do they approach publishers directly with their art or manuscripts?

It is not necessary to have an agent. But that said, we do know that, for publishers, the agent is the first quality filter that helps them become more efficient when it comes to selecting titles. In terms of percentages, however, interestingly, there are many more authors not represented by an agency; they are not necessarily a priority. In fact, in Spain there are not many specialized agencies, both for illustration and for children’s and YA literature.

For illustrators it is even easier: approaching publishers with your portfolio and being persistent may be enough to land a first assignment through publishers. The same can happen for writers, but in this case it is helpful to submit manuscripts to literary contests.

As an illustrator, have you noticed any similarities or difference in the style of illustration used in children’s books in Spain, as compared with other countries?

Yes, of course. Spanish illustrators are characterized by being freer and aesthetically more plastic. We do not have as many demands in terms of complying with trends or schools of thought as in other markets, such as the Anglo-Saxon market. We are given greater freedom when creating. And this is an advantage when presenting projects, because we have more opportunities to represent our inner world, tell more authentic stories, and get them published.

Of course, the market is smaller and perhaps publishers can take more risks because they don’t have as much to lose if the book doesn’t work, since print runs are very small.

Is there something else about children’s publishing in Spain that you’d like our readers to be aware of?

The Spanish market is constantly evolving and the bridges with Latin America are increasing. We are making this happen and I think it is a great opportunity to expose other Spanish-speaking markets where we can share stories.

In addition, associations like SCBWI are strengthening and encouraging more and more of these bridges and this leads to opportunities for creators to have their stories heard and enjoyed beyond small markets. We have to be original and sincere with our stories and present them so that they can reach as far as possible, to the children who can enjoy them.

Alejandra Díaz Bouza was born in Ferrol, Galicia (northern Spain), on a summer day in 1985.

As a child, she became a voracious reader of books and manga and an insatiable moviegoer. From her first set of pencils and sketchbook she built a hideaway for creating stories. She’d often look up at the stars and see sketches, stories and legends —some timeless and universal, others waiting to be told —that sparked her interest in astronomy and the decision to study a bachelor’s degree in physics while training as a storyteller.

After completing her undergraduate studies in physics, she moved to Madrid to pursue studies in graphic design, drawing and illustration, and creative writing. Alejandra became involved in various projects and events related to promoting reading and illustration, eventually running across SCBWI (Society of Children´s Books Writers and Illustrators of Spain). She went from volunteer for the association to Regional Advisor of the Spanish region.

Currently she is also a volunteer and member of MÍA society (Mujeres en la Industria de la Animación, Women in the Animation Industry, Spain). She published her first middle grade book, Trece días para arreglar a papá (Diquesí Editions), in December 2019. She has worked as a freelance illustrator since then.

Cristina Freeman Gómez. Two last names is the norm here in Spain. In fact, you can’t be a Spanish citizen without both of them. And it suits me perfectly because it reflects a whole made up of two halves. Strangely however, people often ask, “Do you feel more Spanish or American?” What I want to say is, “That’s like asking, ‘Do you love mom or dad better?’” but I am afraid it might be taken the wrong way, so I just say, “Both.”

Over my 48 years, a few back-and-forths between the U.S. and Spain, now raising three American-Spanish-Argentinian-Italian-Super Fun kids in Barcelona. I have been writing for a living for 12 years, freelance of all sorts, and lately telling career stories in resumes and LinkedIn profiles.

A few years ago, children’s literature snuck up on me, just like how my calico, Simona, silently slithers under my arms as I am typing against the clock—School pick-up! Dinner! Laundry! Hollering in the distance—and starts nudging me to pet her. She is relentless and will not be ignored. Ditto for the stories. I resisted at first because I thought you had to write about something out-of-the-ordinary.

But the characters insisted, giving me a gentle bite when I tried to ignore them, then an encouraging whisper, pointing out that even an “ordinary” childhood is really quite extraordinary, especially when, as all writers know, the everyday in words and on paper, magically transforms into mirrors and windows for readers. 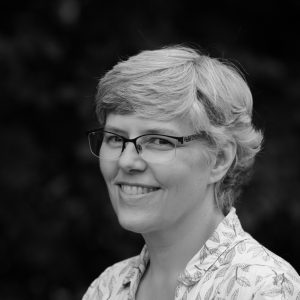 Elisabeth Norton writes fiction, nonfiction and poetry for young readers. Her poems have been selected for inclusion in several anthologies, including Things We Eat (Pomelo Books, 2022), edited by Janet Wong and Sylvia Vardell, and IMPERFECT II: poems about perspective, an anthology for middle schoolers (2022), edited by Tabatha Yeatts.

Originally from the US, Elisabeth now lives with her family in Switzerland where she teaches English as a Foreign Language (EFL). You can find out more about her and her writing on her website and read some of her poetry on her blog.