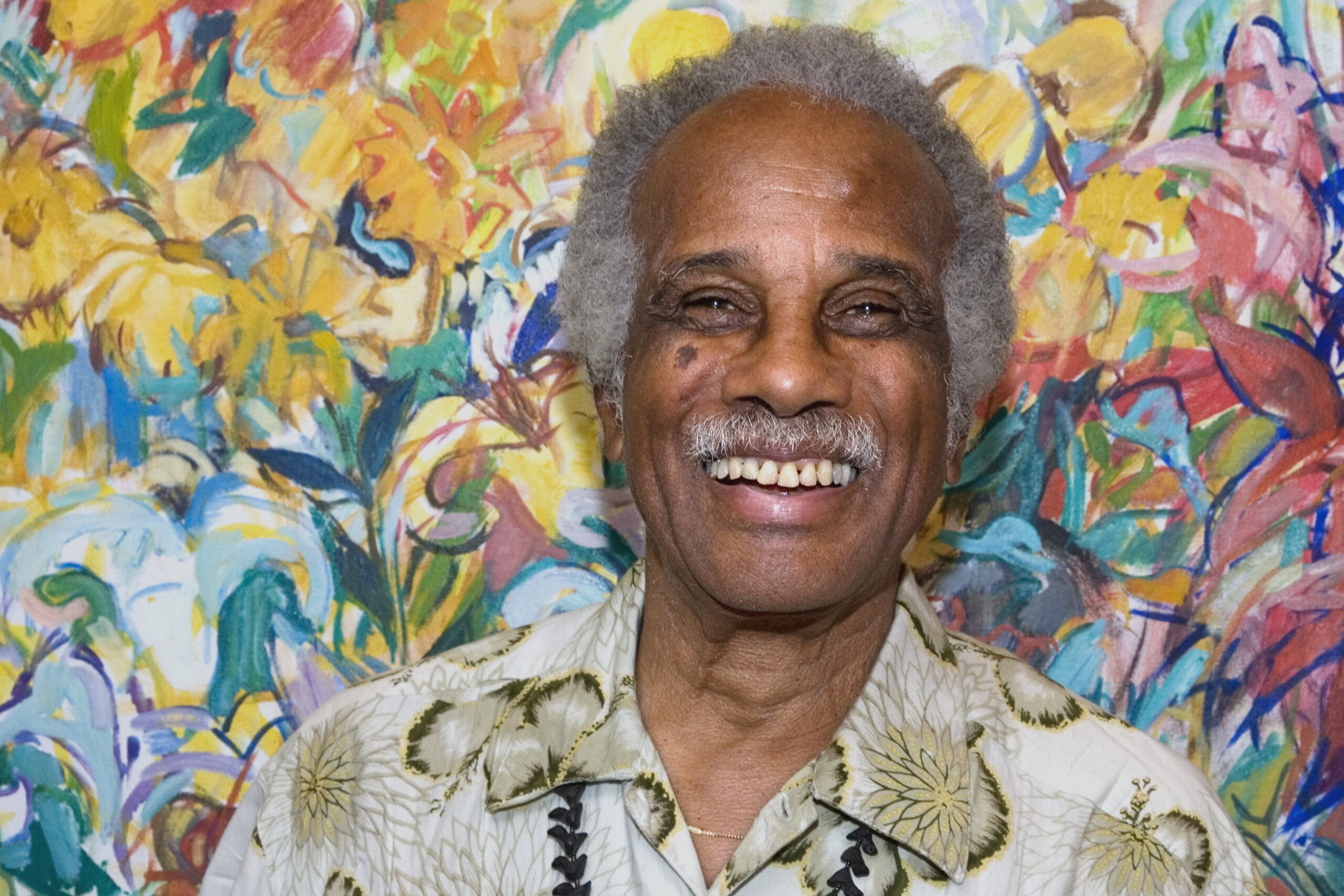 The children’s literature world lost a giant when celebrated illustrator and author Ashley Bryan died on Feb. 2, 2022 in Sugar Land, Texas, at the home of his niece Vanessa Robinson. He was 98.

Ashley Bryan, Who Brought Diversity to Children’s Books, Dies at 98 by Clay Risen from The New York Times. Peek: “Mr. Bryan had already built a 20-year career as an artist when, in 1965, he read an article . . . bemoaning the lack of diversity in children’s books. Already a devotee of African traditions and stories, he saw a chance to use his talents to bring those tales to life  . . .”

Ashley Bryan, whose joyous picture books celebrated Black life and history, dies at 98 from The Washington Post. Peek: “Along with writers and illustrators such as Ezra Jack Keats, John Steptoe and the late Eloise Greenfield and Jerry Pinkney, Mr. Bryan helped fill a void in the historically White realm of American children’s literature, crafting works that treated Black characters with dignity rather than disdain.”

Ashley Bryan, children’s illustrator and author, has died at 98 from NPR. Peek: “Bryan drew inspiration from a wide variety of cultures, artistic styles and disciplines. Growing up in the Bronx, he loved the stained-glass windows at the nearby St. John’s Evangelical Lutheran Church.”

Obituary – Ashley Bryan from Publisher’s Weekly. Peek: “Bryan was drafted into the U.S. Army in May 1943, during his final semester at Cooper Union. He said that his art helped sustain him during war, giving him ‘faith and direction’ as he endured the struggles of being a Black soldier in a segregated army.”

Bryan was born July 13, 1923 in Harlem to immigrants from Antigua, Ernest and Olive Bryan. He was one of six children. Both parents encouraged Bryan’s art from an early age, his mother lending him her dressmaking shears to cut paper scraps that his father, a greeting card printer, brought home from work. Though his teachers recognized his artistic promise and encouraged him to apply to art school, Bryan was rejected outright from the schools he applied to; one going so far as to tell him that despite his exemplary portfolio, it would “be a waste” to offer a spot to a young man of color.

Still Bryan persevered, and eventually he was accepted to Cooper Union in Manhattan, which used a blind admissions process. He was almost through his studies when he was drafted, landing at Normandy with his all-Black battalion three days after the Allied forces invaded in 1944.

Bryan spent the remaining war years in Belgium and France, where he spent much of his free time sketching soldiers, particularly in moments that captured the racial injustice of a segregated army. His work from this time period ultimately ended up in his 2019 memoir and Newbery Award Honoree, Infinite Hope: An Artist’s Journey from World War II to Peace (Atheneum/Caitlyn Dlouhy, 2019). 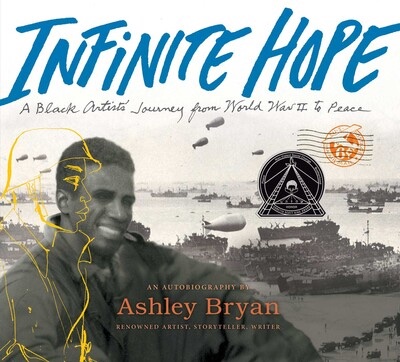 After the War, Bryan returned to New York City to continue his studies, first at Cooper Union and then at Columbia University, where he graduated in 1950 with a degree in philosophy. After he retired from a long career teaching art at Dartmouth College in 1988, Bryan moved to Little Cranberry Island in Maine, where his legendary career as a picture book illustrator and writer began to flourish. Recognizing an enormous need for children’s books celebrating Black culture and voices, Bryan began creating picture books with vibrant, joyful illustrations of Black spirituals, folktales, and Black poets like Langston Hughes and Nikki Giovanni, imbuing the works with a celebration of the Oral Tradition as well as Black life and history.

Those who knew him recall that with Ashley Bryan, everything became poetry. He was known for accepting his myriad awards not with a formal speech, but with whatever poetry moved him in the moment. When he accepted the 2017 Boston Globe-Horn Book Award for his picture book Freedom Over Me (Atheneum/Caitlyn Dlouhy, 2016), he led the audience in an animated recitation of several of Langston Hughes’s poems. 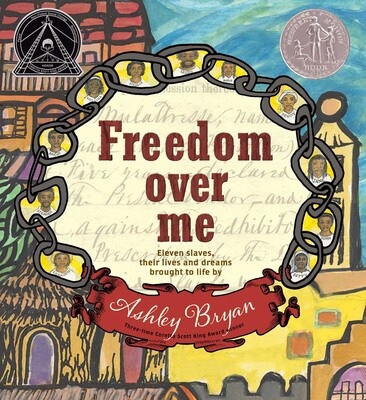 One of my own prized memories was when I had the honor to meet Bryan at the home of his friend and author Lois Lowry in 2009 as the culmination of my first course as an MA student in Children’s Literature at Simmons. While our professor, Susan Bloom, and twelve rapt students sat drinking tea with Lowry in her living room, the doorbell rang. Moments later we were regaled by Ashley Bryan rapping an impromptu poem, clapping and turning our quiet event into a full-fledged party. As Bloom and Lowry noted later, this was merely Ashley being Ashley. His joy in language, rhythm, and song was utterly contagious. I’ll never forget it. 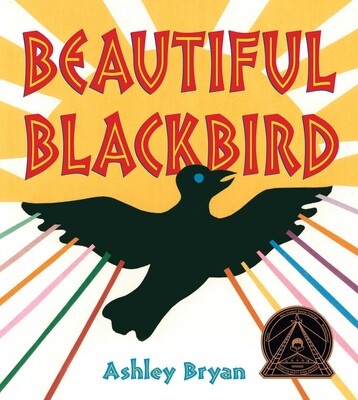 In 2012 The Ashley Bryan Center was created to celebrate and continue the legacy of Bryan’s life and art – a body of work spanning nearly six decades. His many awards include the 2012 Coretta Scott King–Virginia Hamilton Award for Lifetime Achievement and the 2009 Laura Ingalls Wilder Medal (now called the Children’s Literature Legacy Award), Bryan was a Newbery honoree for Infinite Hope (Atheneum/Caitlyn Dlouhy, 2019) and winner of a dozen Coretta Scott King Book Awards. In 2017 he won the Boston Globe–Horn Book Picture Book Award for Freedom Over Me: Eleven Slaves, Their Lives and Dreams Brought to Life (Atheneum/Caitlyn Dlouhy, 2019).

Announcing his lifetime achievement, prize chair and Director of the The Center for the Study of Children’s Literature at Simmons University, Cathryn Mercier, said Mr. Bryan had “filled children’s literature with the beats of story, the echoes of poetry, the transcendence of African American spirituals, the beauty of art and the satisfaction of a tale well told,” inspiring others “to tell, paint, sing and weave their own stories for generations to come.”

Among the tributes to Bryan, author Jason Reynolds wrote: “we throw ‘National Treasure’ around so cavalierly that when you get to know one, you realize how rare they are, and you want the world to dance jubilee in their honor. He deserved it. My god, Ashley, have you earned your rest.”

Sal Robinson, an assistant curator at the Morgan Library & Museum in Manhattan, told the New York Times that Bryan was “essential in the movement to start telling and retelling and spreading stories of Black life and African folk tales, and in centering them on Black protagonists and for Black children.” In October, the Morgan will begin a three-month exhibition of Mr. Bryan’s work.

Among the many illustrators, authors, and storytellers who marked Bryan’s passing are Linda Sue Park, Gareth Hinds, Nikki Grimes, as well as the Eric Carle Museum of Picturebook Art. 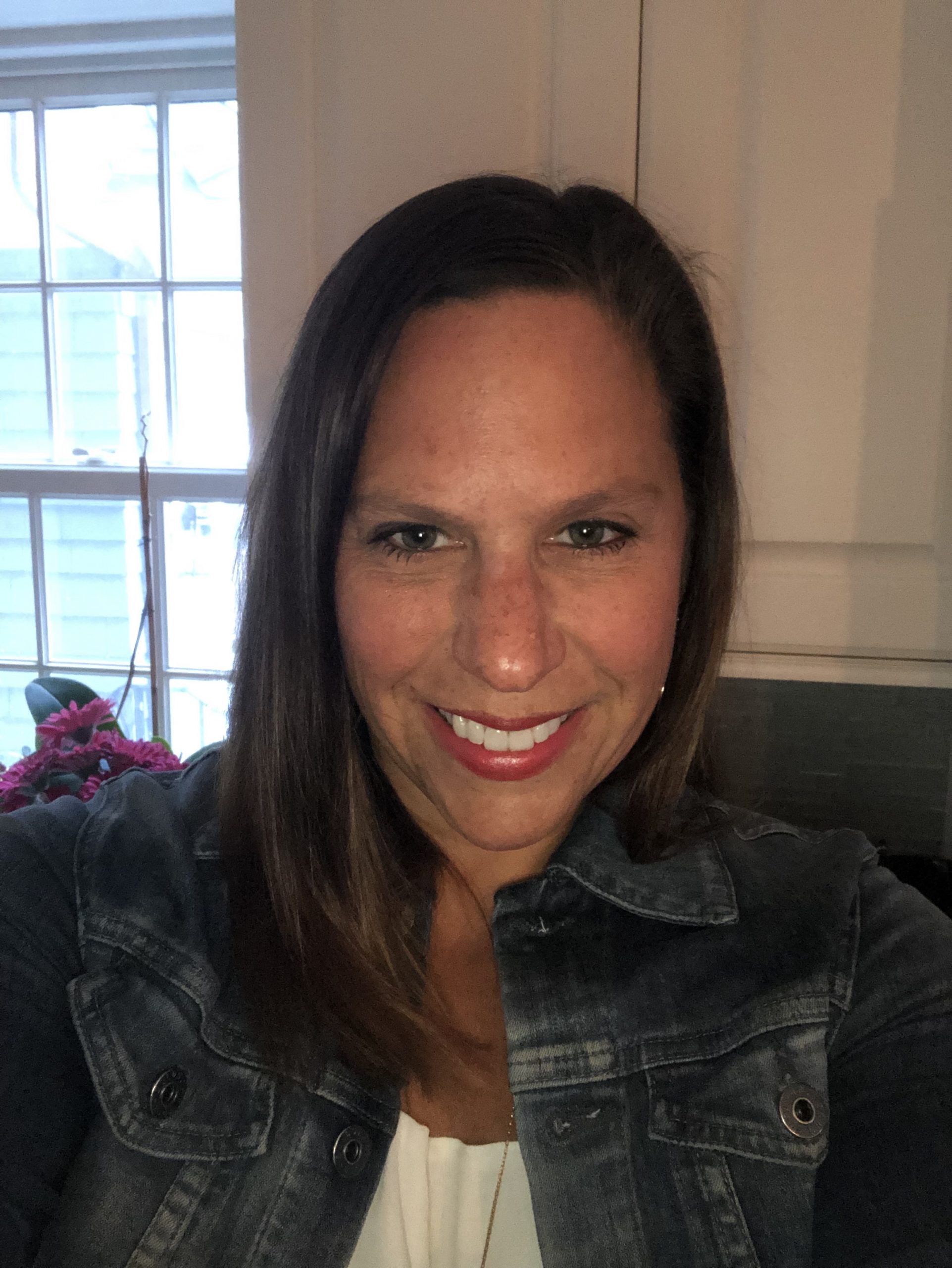 Rebecca Kirshenbaum has an MFA in WCYA from Vermont College of Fine Arts, and MA in Children’s Literature from Simmons University, and an MA in English literature from Columbia. She really, really likes being a student. She grew up in Cleveland and roots for all Cleveland sports teams even though she now lives in Boston.

She lives with her husband Mark, her teenage sons, Caleb and Eli, plus a lot of animals – guinea pig Sprinkles, a bunch of fish, and her family’s therapy dog Quimby. (All of you kidlit people should get the Ramona reference!) When not reading and writing, she teaches fourth and fifth grade literacy and organizes her bookshelves in rainbow order.