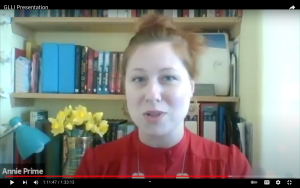 Early in the pandemic, the Global Literature in Libraries Initiative named two winners of its 2020 Translated YA Book Prize: The Beast Player by Nahoko Uehashi, translated by Cathy Hirano (Henry Holt, 2019), and Maresi Red Mantle—published in the U.S. as Red Mantle by Maria Turtschaninoff, translated by A. A. Prime (Amulet, 2020). I had the opportunity to interview A. A. Prime about translating Red Mantle, a sweeping feminist fantasy from Finland (but not, you will note, from Finnish!). 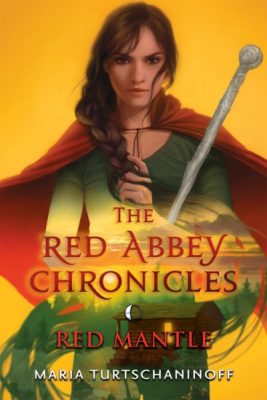 Avery Fischer Udagawa: Red Mantle is one in a trio of books by Maria Turtschaninoff—the Red Abbey Chronicles—yet it also stands on its own. Could you describe where it falls in the trio, what role it serves, and in what order you translated the books? In what order do you recommend that readers read them?

A. A. Prime: The Red Abbey Chronicles are Maresi (Amulet, 2018), Naondel (Amulet, 2018) and Red Mantle, written and translated in that order. However they could be read in any order. Red Mantle is the sequel to Maresi and continues to follow the eponymous heroine’s story. Each book can be enjoyed on its own merit, but it is satisfying to watch a character grow up, so I would recommend reading Maresi first, then Red Mantle.

Naondel is an outlier, set many years before the other two novels. It tells the story of seven women who have become legends in Maresi’s time, and their relationship with patriarchal dominance, and primal feminine magic. It is a separate story but one which adds a great deal of depth and nuance to the world Maresi inhabits. It is a spectacular and haunting novel—my favourite of the three—but contains a great deal of darkness and brutality, so is better suited for older readers. Perhaps it should be read last, to greater appreciate its richness from a place of maturity. 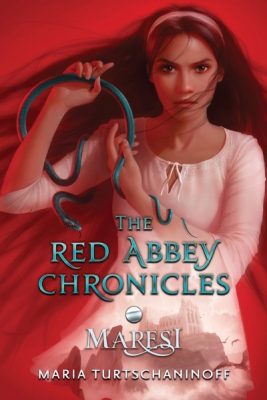 How did this project find you, or you it? What about Red Mantle in particular drew you in as a translator?

I was studying for a Masters in Translation at University College London and needed a translation project for my final thesis. I had recently been enjoying young adult fantasy literature so decided to find something of that ilk to focus my energies on. It wasn’t long before I was seduced by Arra, a previous novel by Maria Turtschaninoff that combines high fantasy with folk tale to tell the story of a mute peasant girl with magical powers. I fell in love with Maria’s poetic, rhythmic prose, and her ability to make magic feel believable and universal.

I got in touch with her and her literary agent to show them my translation and let it be known that there was probably no one better placed to be her English translator than me. As luck would have it, they were looking for a translator for Maresi at the time, and everything clicked into place. 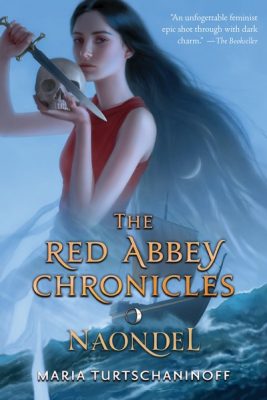 Published initially by Pushkin Children’s Books and subsequently by the middle-grade and YA imprint Amulet Books within Abrams, Red Mantle offers sumptuous vocabulary: scriptures, chronicler, venerable. Were you ever asked to adjust the register for a YA readership? Or did you have full license to translate as the text bade, without worrying about the supposed reading level of the target audience?

Issues came up with word choices that might be considered too formal, informal or anachronistic, but I don’t recall any issue with the maturity or complexity of language.

Who are we to decide what words younger readers do or don’t want to read? In the context of fantasy fiction set in a non-specified pre-industrial age, I believe a certain loftiness is expected and appreciated, and not only among avid readers. Any young adult who has seen “Game of Thrones” or played “Age of Empires” would be familiar with the lexicon of high fantasy.

Was Maria Turtschaninoff involved in your translation process in any way?

Absolutely. She is married to an American and speaks perfect English, so she was able to read my work with a keen and knowledgeable eye. She also reads a great deal of fantasy and sci-fi in English so she even had some vocabulary suggestions that were better than mine! It was also incredibly useful being able to meet up with her and ask her some very specific questions.

On one notable occasion she did an impression of a sound a character made, which was very illuminating. More generally speaking, she and I became good friends over the time it took to write and translate three novels, which I believe gave me a richer insight into the voices and themes of the novels, knowing the woman behind them all.

How did you find it approximating the music of Finnish in English, especially in scenes where dramatic build was key, such as in the climactic scene where ancestors battle with soldiers? Did you have to do a fair amount of “changing” things to accomplish the storytelling?

Aha! This is a common misunderstanding. Though Maria Turtschaninoff is a Finn living in Finland, she actually writes in Swedish, her native tongue. Finland-Swedes are a Swedish-speaking minority in Finland making up roughly five percent of the population.

As regards the music of the Swedish, I don’t think there are any major linguistic barriers to replicating similar sentence structure and rhythm between Swedish and English. But a lot of this is done more instinctively than academically. When I am absorbed in a story and can picture the scene before me, the language flows. Of course this involves a certain amount of “changing”, as every single word in the book needs to be re-written—that’s what translation is.

I think the concept of preserving an original text in its entirety is a fantasy. The translation must serve the story itself and recreate the excitement and spectacle of the original, rather than slavishly stick to sentence structures that might be an impediment to the comprehension or enjoyment of the reader.

Speaking of ancestors, altars to ancestors are common in Japanese culture, home of the works I translate, but I was pleasantly surprised to see the ancestors’ centrality in a Northern European story. Is devotion to the ancestors common in daily life in Finland?

Not as far as I know. I think this may be more personal to Maria.

Are the feminist aspects of Red Mantle as radical in their culture of origin as they are in the Anglosphere?

This is an interesting question, to which the answer is: yes and no. Yes, the continuing promotion of feminist ideas, female-centric fiction, and challenges to patriarchal norms are relevant everywhere. But no, I do think that the Nordic countries are further along this path than the UK or USA. In terms of equal pay, family planning, childcare and other factors, the Nordic countries continually come out on top in any rankings of gender equality. It would be difficult to imagine the abortion laws currently in effect in Texas ever taking hold in Finland or Sweden, for example.

What are you working on as a literary translator these days?

I have been lucky to enough to be introduced to another Finland-Swedish writer of young adult feminist fantasy, namely Karin Erlandsson. Look out for The Pearl Whisperer, the first in her beautiful series The Song of the Eye Stone, out this year from Dedalus Books in the UK.

The Authors Guild and PEN America hold that in literary translations, the Translator’s name should appear “wherever the Author’s name appears.” Publishers are increasingly observing this standard. It would be wonderful to see A. A. Prime’s name appear on the cover of future printings of Red Mantle, as well as in its metadata. 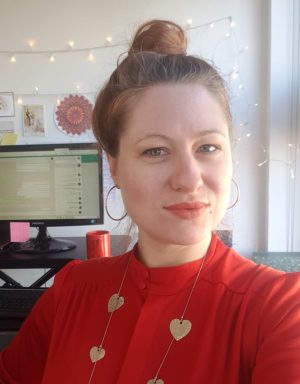 A. A. Prime is an award-winning translator of Swedish and Finland-Swedish literary fiction and nonfiction. She also writes, edits, reviews books, and translates from Russian, Spanish and French. 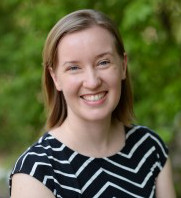